With six consecutive losses, the most by any team in the history of the Indian T20 league, Bangalore are now in a do-or-die stage when they meet Punjab for the match no 28. Another loss and Bangalore will be out of the playoffs contention. Punjab, who have won four games this season, will not be an easy side to beat, especially because KL Rahul and Chris Gayle are in form. Let us take a look at both the teams before you form your Fantain XI for the Punjab vs Bangalore game.

There is no update on Chris Gayle’s back injury. Whether or not he will play the game is not confirmed yet, but given the form that he is in, Bangalore would be hoping to avoid a Gayle storm.

Skipper Virat Kohli has often been criticised for his selection of players. Sometimes he keeps changing their batting positions, and at other times keep dropping them on the back of one or two poor performances. It remains to be seen what he does for this game.

KL Rahul – The batsman is coming into the game on the back of a very impressive performance against the Mumbai team. He scored an unbeaten 100 and will be looking to continue his form against an unimpressive Bangalore bowling line-up.

Virat Kohli – Although Virat the batsman started this season on a poor note, he roared back into form in Bangalore’s previous two games. He will now be hungrier than ever to perform for his team and lead from the front, which is why he should be on your Fantasy Fantain XI.

Ravi Ashwin – Ashwin has been spearheading Punjab’s bowling this year. Although he has not been very economical, he can give the team crucial breakthroughs and can get you some points on your Fantain XI.

Umesh Yadav – Umesh Yadav is likely to make a comeback in the playing XI in this game, given how the Mohali pitch plays. His pace could play an important role in whether Chris Gayle will fire on all cylinders or not.

Ab de Villiers – Apart from one impressive knock, Ab de Villiers has not contributed much with the bat to the Bangalore team and will be hoping to come good against Punjab. 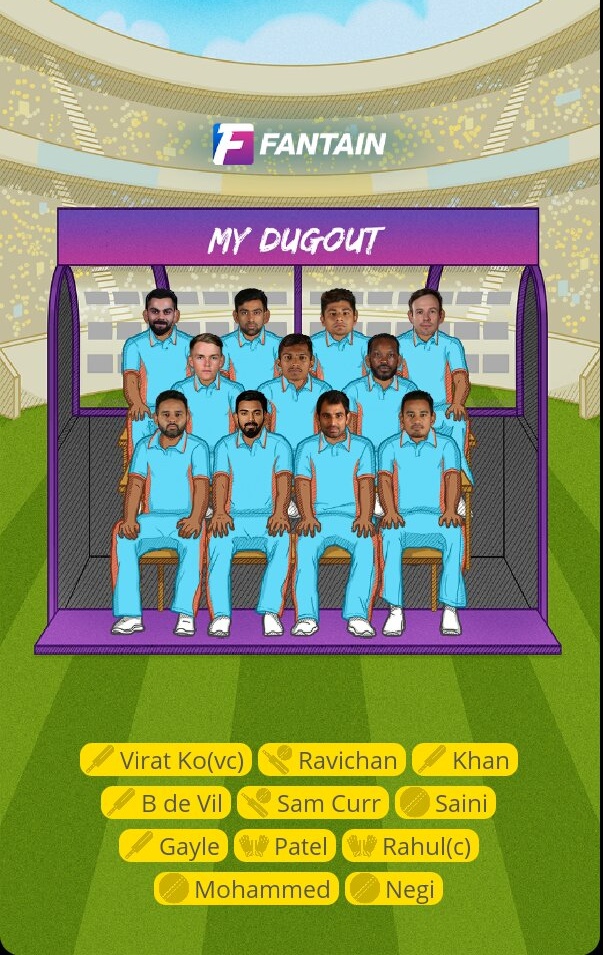