Which player should be your captain in fantasy team?

The last time both these sides met at Chennai on Tuesday, the clash was expected to be a high-octane one since both teams occupied the top two slots on the points table. But the contest turned out to be a damp squib as Kolkata slumped to a heavy defeat.

Since then, Kolkata faced another defeat – a comprehensive 7-wicket loss to Delhi – while Chennai produced another thrilling win which was completed off the last ball of the game against Rajasthan. Despite the twin successive losses, Kolkata will come hard at Chennai in a bid to turn a corner when they will face off against Chennai at the Eden Gardens on Sunday afternoon.

Given his style of play, Andre Russell has shown unprecedented consistency this year and it will be foolish to not pick him in your fantasy team. Also, the Chennai spinners are the ones to watch out for yet again and will enjoy bowling at the Eden Gardens deck which assists the slow bowlers.

With the kind of form Chennai is in at the moment, the odds are heavily tilted towards them to complete another successful away win. But Kolkata are not going to go down without putting a fight. This contest has all the makings of a high-scoring cliffhanger.

Captain: An average of 100.66 and a strike rate of 212.67 this year has sent shivers down the spine of bowlers around the league. In 6 outings with the bat, Russell’s lowest score has been 45 and he looks in no mood to budge. The Jamaican cricketer has also picked up 6 wickets at 21 runs apiece.

Vice-Captain: Watson was off to a flier against Kolkata in the previous game before he was picked out by Narine. In the next game, he got a good ball and was dismissed for a duck. The former Australian cricketer has looked in good form but has found ways of losing his wicket. If he stays at the crease for a longer time, he can make a vital contribution, especially against an inexperienced Kolkata pace attack.

Imran Tahir will yet again play a huge role in the game. Kuldeep Yadav will hope to perform a similar role for his side. The contest between him and Dhoni will be an interesting one since the chinaman has dismissed the former India captain a few times in the preceding seasons.

Captain: Narine has made up for his lack of wickets with quick runs with the bat at the top of the order. Chennai won’t make the mistake of introducing spin against Narine early on. With the ball, he is still a reliable option especially once the Powerplay is completed.

Vice-Captain: Rana’s ability to tackle spin will come in handy during this game. After a promising start to the season, the Delhi boy has experienced a slight loss of form but that can change quickly. His street-smart off breaks gives Karthik cushion.

Dhoni has been dismissed only twice after 5 outings with the bat. He has found a way to win games for his side from tricky situations. With Rayudu coming back to form, Chennai’s middle order has started to look dangerous. With the kind of form he is in, Deepak Chahar will love having a go against someone like Narine. Jadeja showed his value with both bat and ball in the previous game. In the absence of Bravo, his role with the bat has expanded but the allrounder has responded responsibly.

Du Plessis is an ideal candidate to play the anchor’s role for Chennai and has looked in decent nick too. Jadhav will be tested against the spin contingent of Kolkata but has the required skills to tackle them. 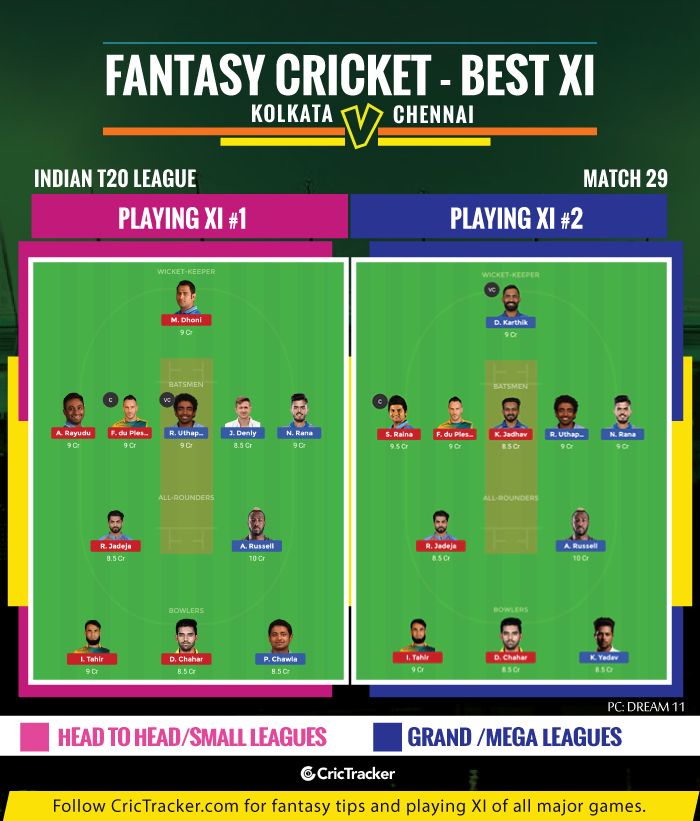