On Sunday night at the Wankhede, it is likely to be a matter of which side’s batsmen are willing to wrest the initiative – and both sides have plenty of batters who can.

The 2017 Indian T20 League Champions will open their campaign at home against the newly rebranded Delhi franchise in a coming together of two poor starters in the league. Even in their best seasons, Mumbai have taken their own time in terms of hitting the groove, and a slow start has often been Delhi’s undoing. On Sunday night at the Wankhede, it is likely to be a matter of which side’s batsmen are willing to wrest the initiative – and both sides have plenty of batters who can. Here we take a look at the Dotball Fantasy Cricket Guide for Match 3.

The Wankhede usually produces high scoring games with teams that win the toss typically electing to chase. The conditions tonight are likely to be similar with some assistance likely for the quicks early on.

Rohit Sharma: One doesn’t simply punt against Rohit in the Indian T20 League, and especially not after he announced that he would be opening again this season (after batting at 3/4  in 2018). His average as an opener (41 across 19 innings) is markedly higher than when he bats in the middle order.

Shikhar Dhawan: Rohit’s India limited overs opening partner has been a T20 phenom and if his exploits with Hyderabad are any indication he is likely to be as prolific with his new franchise.

Rishabh Pant: He came of age on India’s recent tours and that confidence is likely to rub off positively on the young keeper who always comes out all guns blazing.

However if you are willing to take a bit more risk, maybe consider these ‘Risky Captain Choices’

Krunal Pandya: The elder Pandya usually bowls an over or two in the powerplay and if he gets a chance with the bat can be destructive. His all-round ability makes him a tempting pick.

Quinton de Kock: He is the kind of T20 opener that delivers runs (and boundaries) in buckets when he clicks and the fact that as a keeper he will get to potentially pouch catches from the pacers make him an interesting choice if bonus points are your thing. However, the risk is that Evin Lewis may be picked before him.

If it is Mumbai, don’t forget Jasprit Bumrah but an interesting pick for Delhi is likely to be Trent Boult. Rohit’s weakness against him is well known and that could be something, anyone, picking the Mumbai captain needs to be wary of.

Mumbai are a tough team to beat on home turf and with a settled team as opposed to a new look Delhi team, they are likely to be more coordinated. Expect a game where the Mumbai top and middle order delivers the goods. 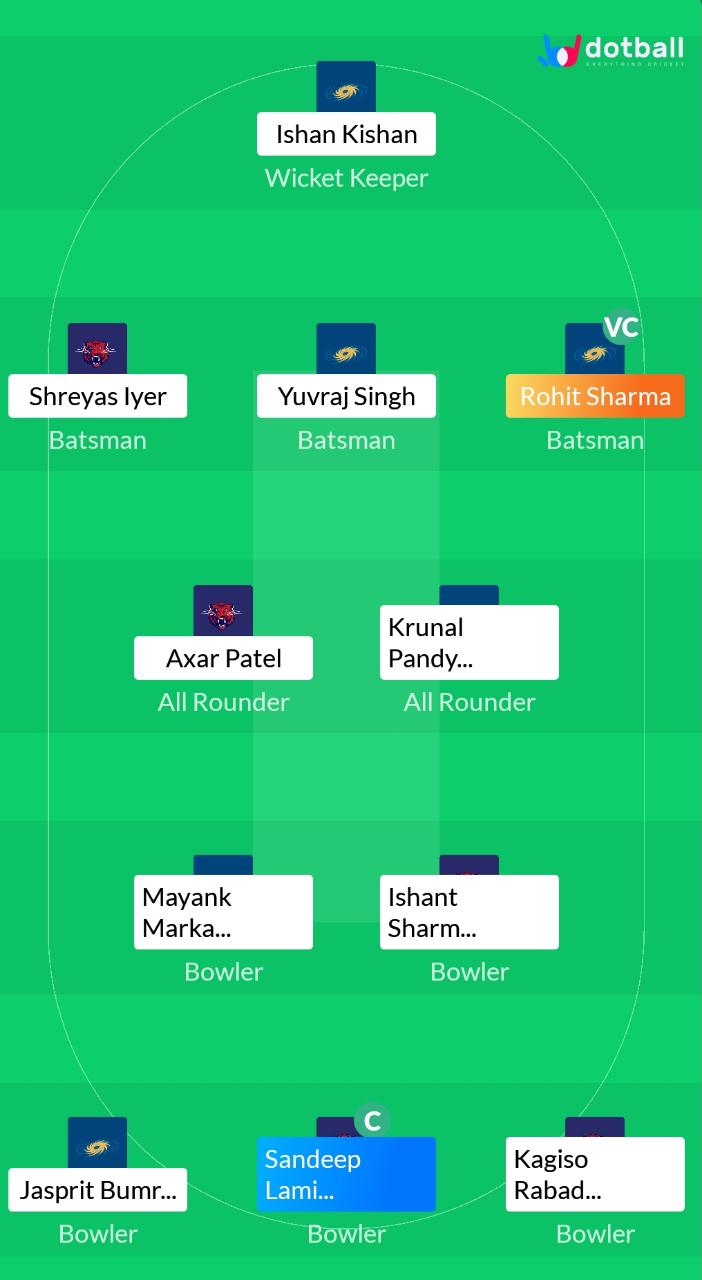