Chennai have a 9-2 head-to-head record against Hyderabad.

On numerous occasions, whenever Chennai had their backs to the wall, everyone thought that this time they will capitulate. But such has been the resurgence and belief of the side that they have found ways of stealing tight wins in the end and with 7 wins out of 8 this year, they are the table-toppers at the moment and by a fair distance too. They will travel to Hyderabad to face Kane Williamson’s side, who have faced 3 defeats on the bounce after their spirited start to the tournament. Hyderabad will have the home advantage but will have to play out of their skins to outplay Chennai when both sides collide at the Rajiv Gandhi Stadium on Wednesday.

Chennai’s success formula has relied on their bowling unit, particularly the spinners and it will be wise to include them in your fantasy team. On the batting front, Hyderabad’s in-form openers alongside the likes of Dhoni and Raina will be valuable picks. In the end, it will all come down to the battle between the Chennai spinners and an inexperienced Hyderabad middle order. Prediction wise, Chennai have their noses far too ahead of the hosts.

Captain: Old warhorse Tahir has been such a valuable asset to the Chennai team this season. In 8 games, the South African legspinner has captured 13 wickets at a stellar economy rate of 5.76. He will yet again hold the key for Chennai and, with Hyderabad not having big stars in the middle order, expect Tahir to have a walk in the park against them.

Vice-Captain: Orange cap holder David Warner (400 runs @ 80) has been a model of consistency this year, racking up 5 fifty plus scores in 8 innings so far. The Australian will have to bring his experience to the fore yet again and will look to bat deep into the innings in order to cover up for the lack of a solid middle order.

Jadeja has quietly gone about his business and will have his tail up after his World Cup selection. Jadhav and Shankar, like Jadeja, will also be relieved to find themselves on the plane to England. Both will be inspired to produce meaty performances for their respective side.

Captain: Dhoni has always looked a dangerous player with the yellow uniform on. In 6 innings, the former Indian captain has amassed 230 runs at a soaring average of 76.66 while striking at 127.07. His ability to up the ante in the back end of the innings instil fear among the opposition bowlers.

Vice-Captain: On his return from a long injury lay-off, Williamson was dismissed cheaply but the Kiwi star had piled up more than 700 runs in the previous edition and can’t be written off already. With Hyderabad struggling to get going in the middle, Williamson might just be the solution for the team’s middle muddle.

Rayudu will be disappointed to miss out for the World Cup and will love to remind the selectors of what he can still do in white-ball cricket. Sandeep Sharma has often foxed batsmen with his knuckleball and will look to carry his outstanding form this season forward. 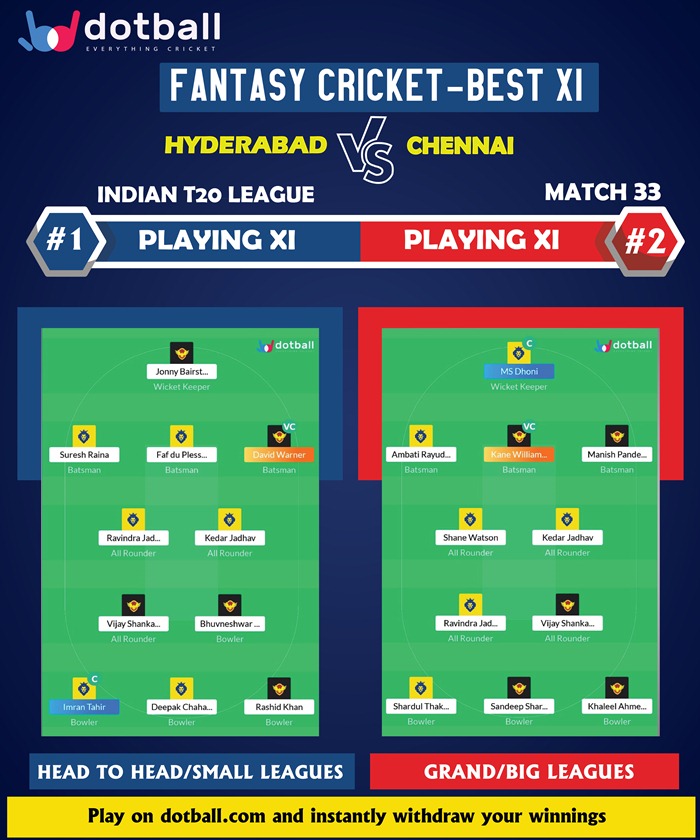 Bairstow has been very consistent but hasn’t played a substantial knock for his side since a few games. With the middle-order struggling, Bairstow will look to bat longer which will enable him to post a big score for his team. Chahar continues to impress with his skills with the new as well as the old ball.

It is high time for Hooda to step up and shepherd his side during the middle. Dhoni’s reluctance to have Thakur in the side finally paid off when the pace bowler returned with 2 for 18 and was responsible for Kolkata’s sluggish finish. He will have his work cut out against Warner and Bairstow, however. 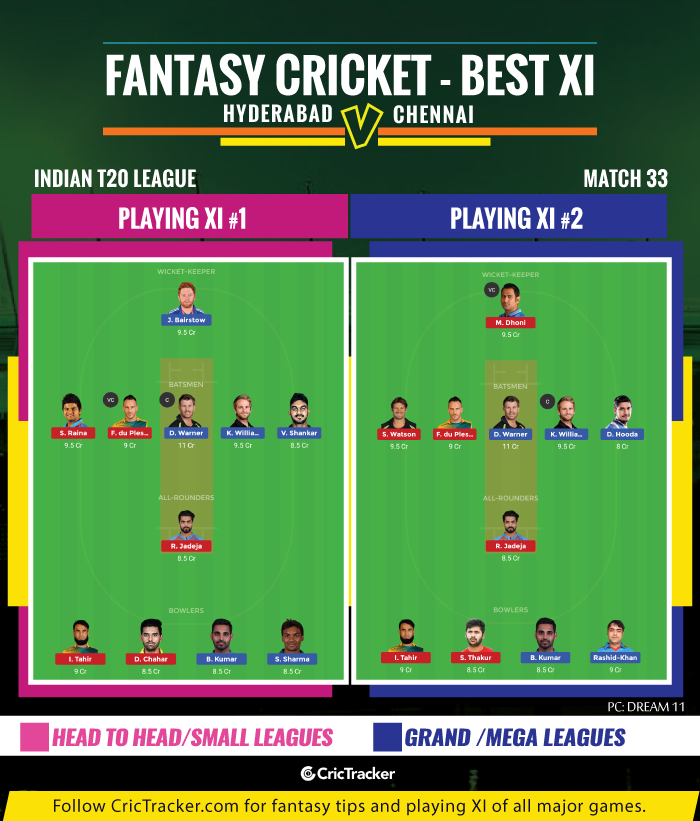