All that you need to read before picking your Fantain XI for Hyderabad vs Chennai.

The Hyderabad side made a good start to the tournament but could not maintain their momentum and are currently placed sixth on the points table. They will be hoping to enter the first four on the points table once again when they host Chennai for match no. 33 of the Indian T20 league.

Chennai have lost only one of their games so far, and are the team to beat. They have a strong unit which performs in every ground they play on. Last year, Chennai defeated Hyderabad four times, a record which will further worry the hosts. Here is all you need to know about both the teams before picking your Fantain XI for Hyderabad vs Chennai.

Hyderabad may see Kane Williamson opening the innings David Warner, while Johnny Bairstow may come down the order. Ricky Bhui could be replaced by Manish Pandey.

MS Dhoni has no reasons to tweak a playing XI which is winning games on a trot. Imran Tahir will once again be the key in the bowling department, more so because the Hyderabad pitch favours spinners.

MS Dhoni – The skipper is in good form this season, and has been contributing with his bat consistently. This also augurs well for Team India, who were in a spot of bother considering Dhoni’s slow demise of form. However, the 36-year-old batsman still has a lot of fuel left in his tank and can get you a lot of points on your Fantain Fantasy XI.

Shane Watson – Watson could not do much against Kolkata at Eden Gardens and would like his form to resurface against Hyderabad. He has shown glimpses of what he can bring to the table and should be a must on your Fantain XI.

Imran Tahir – The South African bowler has been Dhoni’s trump card this season. His four-wicket haul against Kolkata was the turning point of the game, and he will look to continue impressing against Hyderabad and expose their weak middle order once again.

David Warner – With the kind of a couple of innings the opener has played this season, he remains one of the biggest threats to bowlers. Warner can smash the ball all over the park and get you some quick points.

Rashid Khan – The Afghanistan leg-spinner has not been as effective this year as he was last year. But with his team needing a must-win, he will be gearing to make the most of the spin-friendly home track. 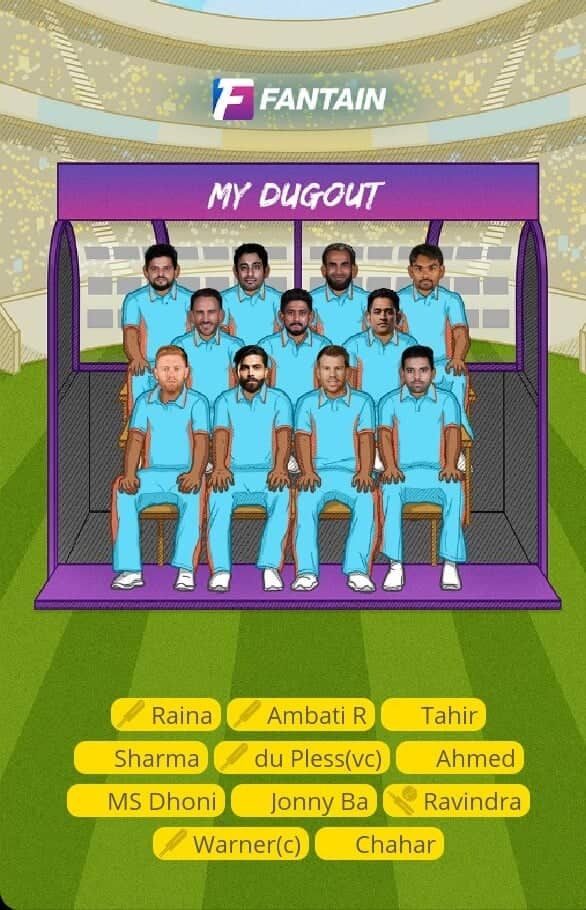