Who among Kohli, De Villiers and Russell will you pick in your fantasy team?

Kolkata have slipped to the 7th spot on the points table after conceding losses in each of their previous 3 games. With the competition for places for the Play-Offs getting intense, Dinesh Karthik’s men need to put an end to the string of losses and start winning again. Playing against Bangalore will give them confidence as they had stunned Virat Kohli’s men when they had successfully chased down a target in excess of 200 – the first and only occurrence so far this season.

Bangalore are all but out of the race for a spot in the final four unless something dramatic happens. They will look to avenge the shocking defeat when they face Kolkata at the Eden Gardens on Friday.

Both teams have no shortage of firepower in their tanks which will make your job difficult if you are sitting down to pick a fantasy team. The likes of AB de Villiers, Kohli and Andre Russell have been in stupendous form. On the bowling front, going by the last couple of performances, Moeen Ali is likely to be one of the most sought-out players and so will be legspinner Yuzvendra Chahal.

As far as the result of the game is concerned, it looks likely to go down to the wire with Kolkata being the marginal favourites. The 200-run barrier has only been breached 5 out of 33 games this year and this clash certainly has the promise of being the next one.

Captain: While Bangalore has had a disastrous campaign, de Villiers has been in ominous form scoring more than 300 runs with an average and strike rate in the north of 50 and 150 respectively. He will be keen to force a win for Bangalore, something which has eluded them this year, through another solid performance.

Vice-Captain: Playing against Chennai in the previous game, Russell recorded his first failure with the bat when he was holed out in the deep for 10. Despite that rare off day, Russell averages 78 at a strike rate of 213.69 after scoring 312 runs for Kolkata, 100 more than any other batsman has managed in the side. With Bangalore’s pace attack lacking experience and composure, Russell could inflict major damage towards the end of the innings.

Nitish Rana has only 31 runs in the previous 3 innings and is due for a score. Saini’s raw pace has caused problems to various batsmen in the league and could counter Russell’s belligerent form.

Captain: Ali had a dream game – 2 for 18 and 50 off 32 – against Mumbai but that too wasn’t enough to force a win for his side. His bowling form has added a dimension to the listless Bangalore side and will be a handy option at the Eden Gardens which predominantly assist the spinners. He will relish batting against Chawla, who hasn’t had a great time with the ball.

Vice-Captain: Barring this year, where he has struggled to pick wickets, Kuldeep has a good record while playing at the Eden Gardens. It is about time he starts firing and picking those crucial wickets in the middle if Kolkata are to progress to the Play-Offs.

Stoinis has consistently added impetus to the Bangalore innings and could be used as a bowling option by Kotla at the Eden Gardens. Chahal will be able to use the conditions the best due to his outstanding form this year. 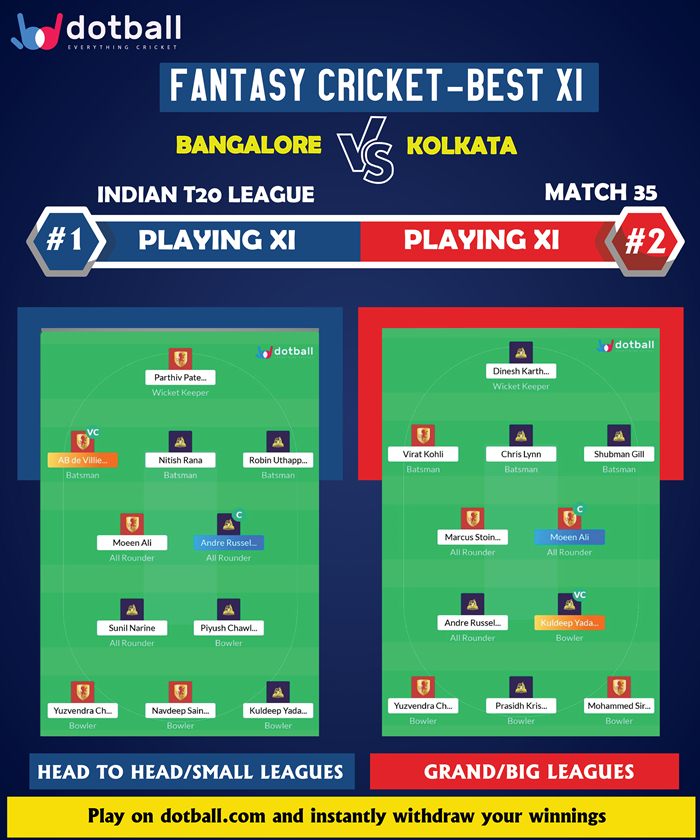 Gurney’s well-disguised changes in pace might be tricky to hit against at the Eden Gardens surface. Parthiv is in the middle of one of his best years in the IPL and will look to carry his form forward.

Now that Dinesh Karthik is in the World Cup squad, he will bat without an added pressure on him which will eventually benefit him and his team. Robin Uthappa is a good player of spin and has a great record while playing in Kolkata. He is the ideal man to counter the spin threat of Chahal, Moeen and Negi. 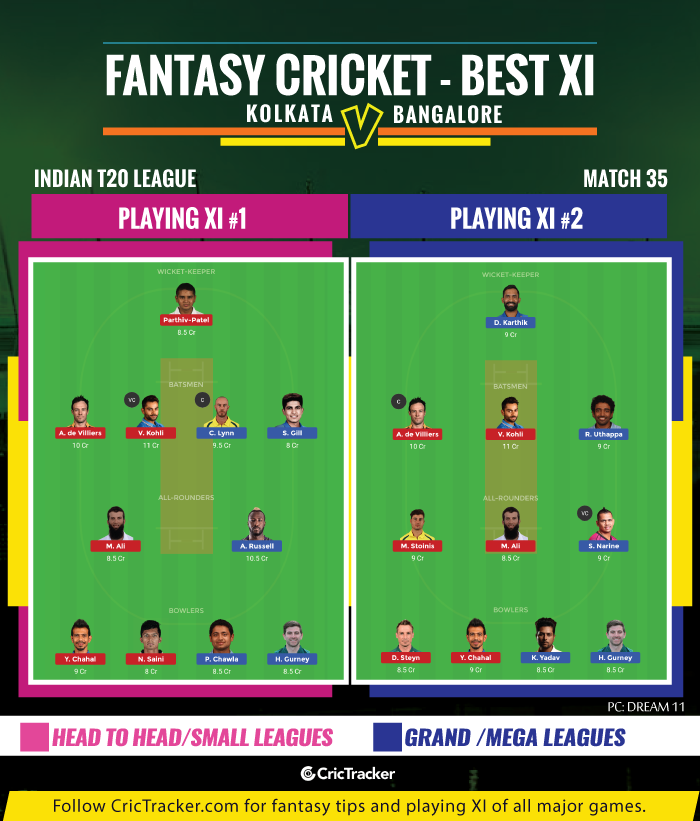