All that you need to read before picking your Fantain XI for Kolkata vs Bangalore.

Kolkata started this season of the Indian T20 league in style, but could not keep up the momentum, and have lost their last three games on a trot. They will be looking for a reversal in their fortunes when they host wooden spooners Bangalore at the Eden Gardens. The interesting thing about the game is that the bowling line up of both the teams is below average, and it remains to be seen how the respective captains deal with that. Here is all you need to know about the Kolkata vs Bangalore game before picking your Fantain Fantasy XI.

The news has it that Andre Russell hurt his shoulder during the net practice and may thus be unavailable for the game. The star Kolkata player was not fully fit for the last game too, which was against Chennai, as a result of which he had managed only 10 runs. It would be wise for Kolkata to give him some rest if they want him fit for the playoffs, in case the team makes it there.

Bangalore will be boosted by Dale Steyn, who has been brought as a replacement for injured Counter Nile. Apart from that, it is unlikely that captain Kohli will make any other changes to his playing XI.

Sunil Narine – Having been promoted as an opener in 2017, Narine was destructive with the bat, but has had a not so great campaign this year. With the ball too, he has been picked by most bowlers. However, he will be looking to bounce back into form in this game.

Chris Lynn – The opener has performed well in patches this season, but it seems that his best is yet to come. Against a weak Bangalore bowling line-up, Lynn will be looking to construct a long innings.

Shubman Gill – the batsman performed exceptionally well when he was promoted as an opener in absence of injured Sunil Narine. He can bat equally well down the order too.

Navdeep Saini – Saini’s pace makes him a force to reckon with. On the Eden wicket, the fast bowler could get some assistance and provide crucial breakthroughs to the team.

Virat Kohli – much like always, the captain will be the one to watch out for in the batting department. Virat enjoys a good personal batting record at the Eden Gardens and can get you some crucial points on your Fantain XI. 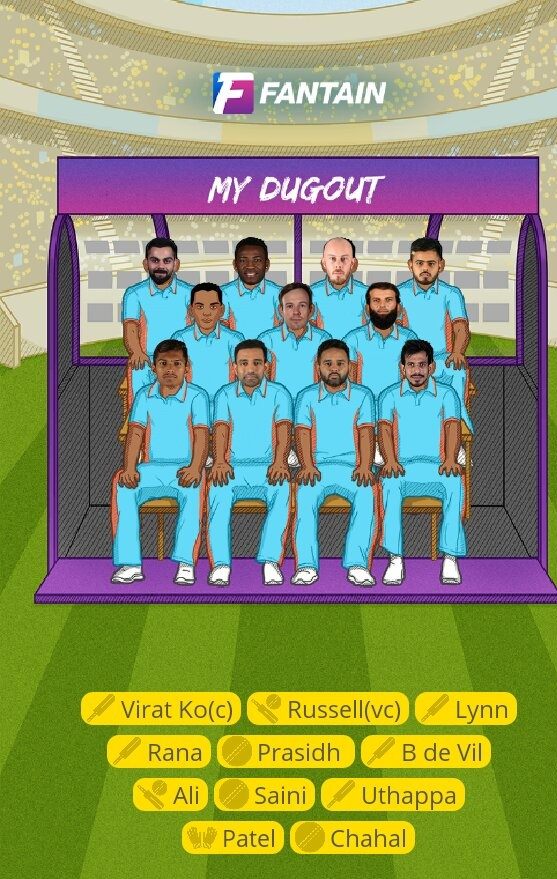