Chennai still are marginal favourites as they are playing at home.

It was on Sunday when MS Dhoni decided to roll back the years and treat everyone with a typical Dhoni masterclass. His superhuman efforts, however, took Chennai to the brink but not over the line as they slumped to a one-run defeat – their third of the season and second on the trot. Regardless of that, they are still at the top of the pile but will love to get some momentum behind them before the playoffs begin.

Hyderabad, on the other hand, have got their campaign back on track after registering two successive wins – one of which came against Chennai less than a week ago. They are now placed on the 4th spot in the points table and will want to stay clear of the other teams by winning against Chennai at the MA Chidambaram Stadium on Tuesday. Fantasy team-wise, it will be a tough one to pick one out of Dhoni and Bairstow in your team since both have been in sizzling form this year.

But because he bats higher up the order, Bairstow edges out Dhoni by minimal margins. It will be prudent to have Warner in your side. The spinners will have a role to play at this venue and both teams have plenty of them in their ranks. Rashid or Tahir? Tough one again. But when in doubt, probably go for both? Chennai have lost two and Hyderabad have won two but despite that, Chennai still are marginal favourites as they are playing at home.

Captain: Warner has already amassed more than 500 runs this year making it the 5th consecutive time he has done that in the tournament. His average of 73.85 is by far the best among the 11 seasons of the tournament he has played. When he fires, Hyderabad are a different side and he will once again hold the key in this crucial contest.

Vice-Captain: After 10 games this year, Tahir has still managed to keep his economy rate under 6. That speak volumes about his control and confidence this season. He has also captured 16 wickets and hasn’t thought once before taking on the likes of Russell or Lynn.

Chahar will be tested against the daunting opening combination of Warner and Bairstow but the youngster has a matured head on his young shoulders and will take it as a challenge. After a few shoddy performances with the bat, Shankar needs to start firing quickly.

Captain: Dhoni’s exploits this year has overshadowed the lack of form of the top-order besides winning a lot of closely-fought contests for Chennai. For numerous years, he has soaked in the pressure before teeing off at the end and sealing the game for his side something which has happened a lot this year. He will yet again pose a huge threat against a tidy bowling unit.

Vice-Captain: Rashid’s imminent challenge will be to attack Dhoni in the middle. Yes, the Chennai skipper won’t take him on but Hyderabad must find a way to dislodge Dhoni before he tees off and Rashid gives them the best chance. The Afghan national has picked a wicket apiece in 9 games at a stellar economy rate of 5.61.

Khaleel has made a telling impact after been made to warm the bench in 6 straight games. In 3 games, the left-arm pacer has already scalped 7 wickets and will enjoy bowling against Chennai’s struggling top-order. 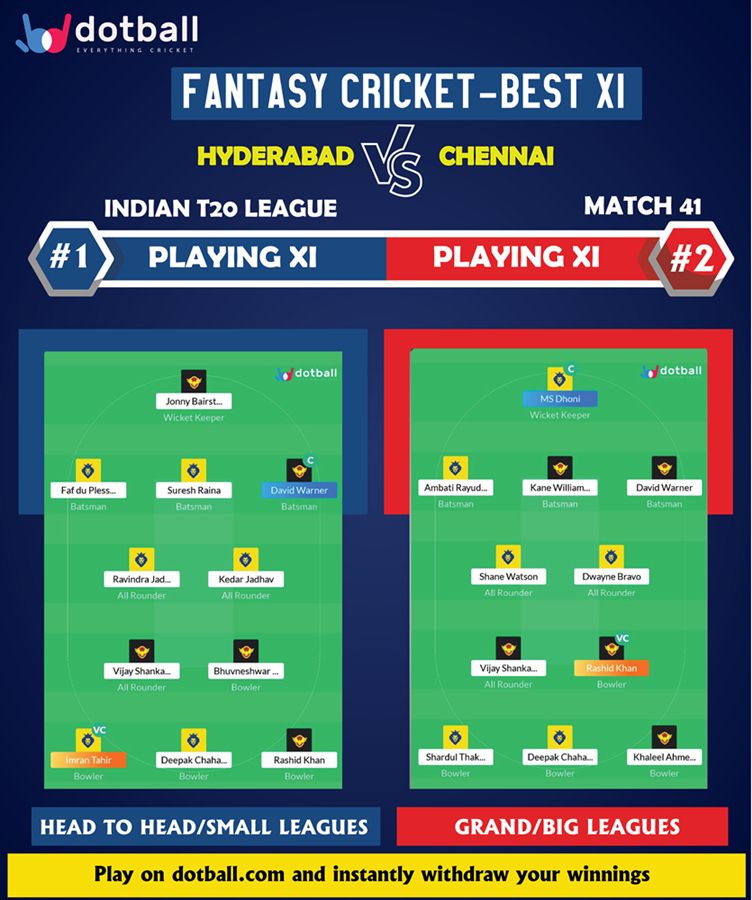 Bravo’s return to the fold will give Chennai more depth in both bowling and batting. Williamson will set his eyes on keeping the Chennai spinners at bay since he is an efficient player of spin.

Nadeem can be a handful at the Chidambaram Stadium and will love to bowl against Watson. He can also tie up Dhoni with his masterful repertoire of variations. 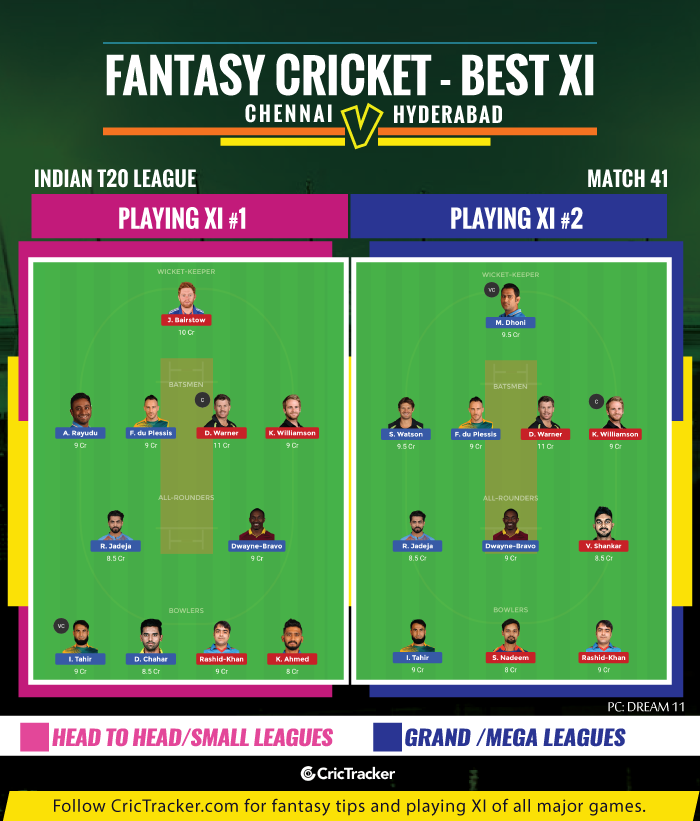