Russell or Smith? Whom you should make the captain in your fantasy team?

Both Kolkata and Rajasthan stand at the wrong side of the points table – at the 6th and 7th spot respectively – and, with only 4 games apiece left in the season, they are facing an uphill task of making it to the qualifiers. Kolkata’s slump in form has particularly been poor as they have faced defeats in each of their last 5 clashes. On the other hand, after a poor start to the season, Rajasthan haven’t really picked up momentum as they have only 3 wins to show for after 10 games.

A loss here will end Rajasthan’s forgettable season and a Kolkata win will bring them back in contention for a spot in the final four. Kolkata will take confidence from an away win over Rajasthan earlier in the league when they face Smith’s men at the Eden Gardens on Friday.

Much of Kolkata’s problem this year has been the form (or the lack of it) of the spinners. The likes of Kuldeep, Narine and Chawla have been ineffective and have leaked runs during the middle overs. As a result, Eden Gardens have seen teams posting high totals this year and it will be prudent to include big-hitting batsmen in your fantasy teams.

The likes of Shreyas Gopal and Riyan Parag can be good bets and so can be a certain Andre Russell. With the way things stand, Kolkata will still start this game as marginal favourites due to the home advantage.

Captain: The big Jamaican has hit 41 sixes in only 9 outings which is 10 more than the next best. It has been that kind of a season for Andre Russell. He has recorded only two scores under 45 this year and still has a lot left in the tank. His battle with Archer will be an interesting one to watch out for. Karthik must use his services more with the ball

Vice-Captain: Gopal has spun the ball a long way and has foxed the best in the business this year. He tends to lose the plot against the big hitters but if he can stick to his stock delivery, he will triumph against them more often than not. 12 wickets from 10 games at an economy rate of 7.02 underlines how well he has bowled throughout the tournament.

Nitish Rana will be looking forward to face as many deliveries from the legspinners in the middle and the form that he is in, the left-hander could end up playing another big innings. Young Rinku Singh will be aiming to replicate his domestic cricket success in the IPL.

Captain: Rahane turned the clock back and recorded a century in the IPL after a gap of 7 years in the previous encounter. The stylish right-hander gives Rajasthan quality at the top of the order. With Kolkata struggling with the ball, Rahane has another chance to get a big one. His season strike rate of 140 shows how well he has been hitting the ball.

Vice-Captain: It has been a case of feast or famine for Lynn this year. The Australian has 3 fifties this season yet tallies only 264 runs in 9 innings. With the Rajasthan attack lacking experience with the new ball, this could well turn out to be an opportunity to shine for Lynn.

Stuart Binny’s selection has given Rajasthan a lot of options in both departments as the all-rounder has delivered in the limited opportunities presented to him. Karthik can explode at the end if he gets a few sighters in the middle overs. 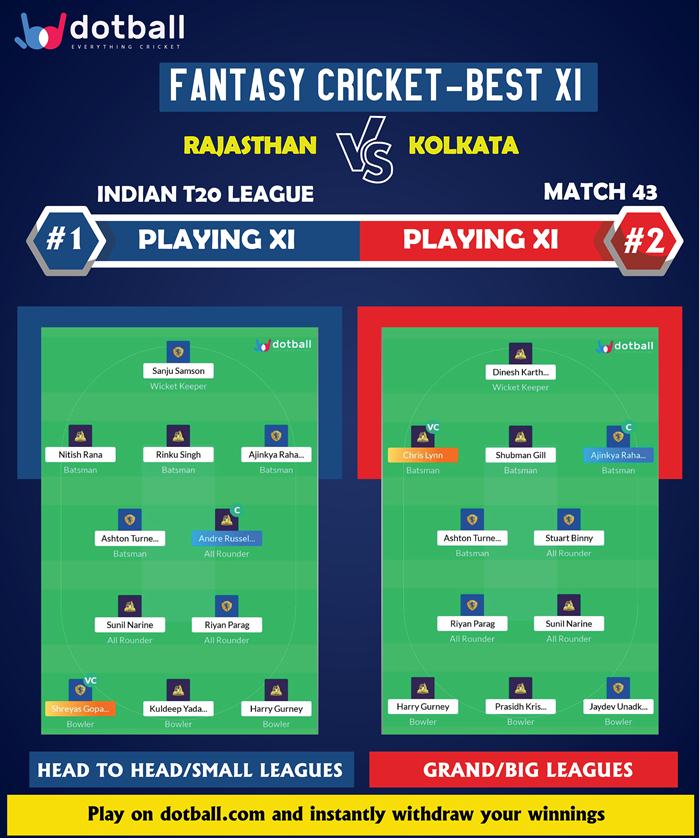 Archer’s phenomenal consistency with the ball make him an automatic choice in your fantasy teams. Smith has shown what he has to offer in the shortest format of the game and can be a valuable option for users.

Sunil Narine will relish facing a thin Rajasthan bowling attack and can demolish the spinners during the Powerplay. Ben Stokes will aim to end his poor campaign on a high before he flies back home to resume international duties. 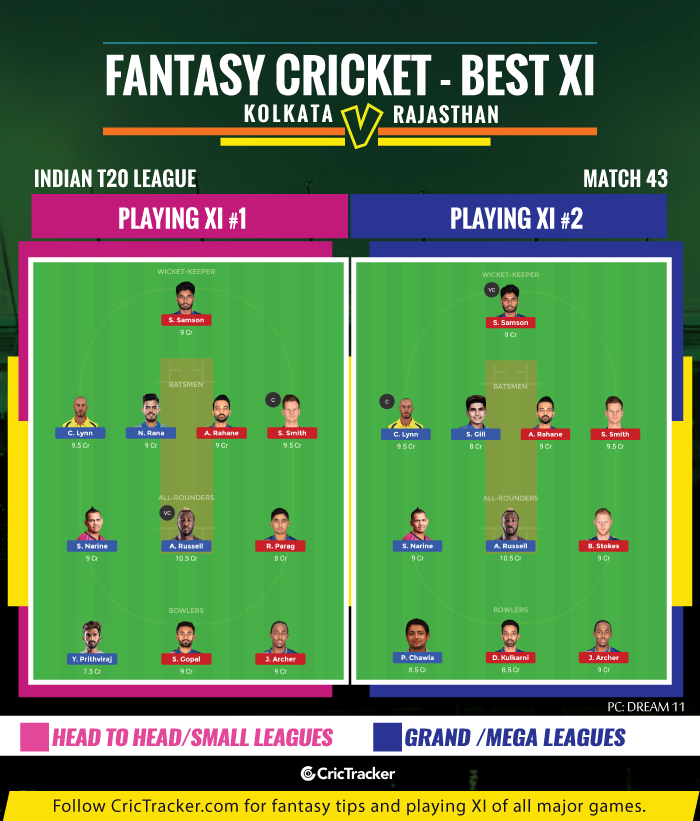 Rs. 51 CASH BONUS IS WAITING FOR YOU! CLICK NOW AND COLLECT.