Delhi has some strong performers to pick from while Rajasthan are looking for those themselves.

Delhi and Rajasthan are two teams at the opposite end of the spectrum. On one hand, Delhi have already sealed their spot in the Play-Offs and at the other, Rajasthan are fighting hard for the ungrabbed final spot in the qualifiers and face a must-win situation to keep them in the hunt when they face the Capitals at the Feroz Shah Kotla in the afternoon game on Saturday. Rajasthan’s recent form suggests that they are no pushovers as they have lost only one game out of their last 5.

In fact, it is Delhi which might be a little under confident as they slumped to a heavy 80-runs defeat in their previous outing against Chennai. The Kotla has seen middling scores throughout the season with the slow bowlers making impact. So if you are picking a fantasy team, it will be prudent to include as many spinners as possible. After his stellar hattrick in the previous game, Shreyas Gopal is a must have in your teams.

The biggest dilemma could be between Samson and Pant but if you go by cricketing logic, the former is a safer bet. Rajasthan might be tempted to bring back K Gowtham purely because of the slow and low nature of the Kotla surface. Delhi has had a phenomenal run but Rajasthan have their noses slightly ahead for this crucial game.

Captain: Kagiso Rabada, Current purple cap holder with 25 wickets. Who has got big players like Russell in his bag will likely perform in this upcoming match as well.

Vice-Captain: 5-over shootout, wet conditions, new ball, fielding restrictions. Enter Shreyas Gopal who goes on to snaps Kohli, de Villiers and Stoinis to complete a bold hattrick. The season has only gotten better and better for the leg-spinner. He will be licking his lips at the prospect of operating at the Kotla pitch.

Binny’s all-round skills are always a huge asset to have. His big-hitting skills could be an X-factor Rajasthan needed plus he is a very handy bowler and can be used with the new ball too. 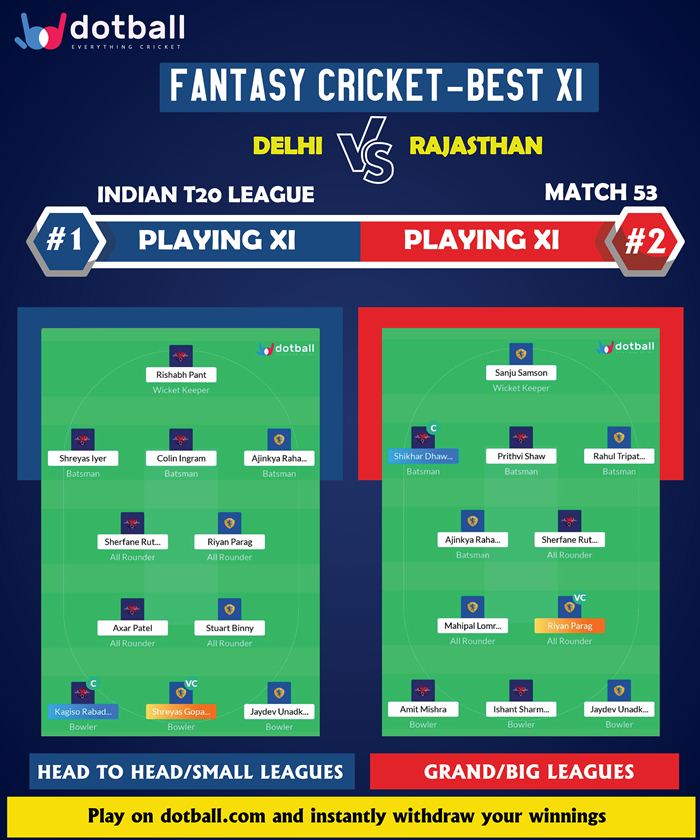 Captain: Dhawan’s gameplan to go all-out aggressive at the start has really helped Delhi post tall scores in the tournament. His confidence is sky-high at the moment and with Rajasthan not possessing too much quality in their pace attack, expect him to play another brisk inning at the top of the order.

Vice-Captain: The exuberance of youth that Riyan Parag brings to the table has given Rajasthan an advantage in a couple of games when the youngster produced two vital knocks down the order. His bowling might buy a wicket or two for Rajasthan given the slow nature of the pitch in Delhi.

After a string of low scores, Shaw will be determined to get a big one against his name. He has played well in patches but has found ways of getting out. But he possesses a lot of talent which could help him turn a corner soon.

Lamichhane will like bowling at this surface and can be a handful against an inexperienced Rajasthan middle-order. Oshane Thomas’ raw pace could prove to be a potent force on an otherwise docile Kotla surface. 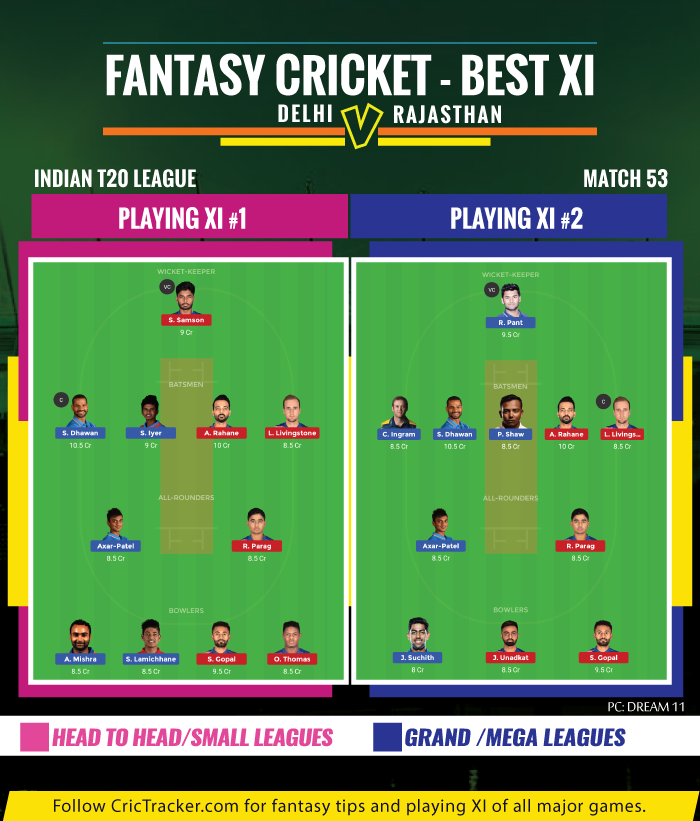 With Steve Smith no longer available to play this year, Rajasthan will be thin on experience which will prompt Rahane and Livingstone, the openers, to play with more responsibility and use their good form to put runs on the board.