It is expected to be the game where CSK experiment with the team.

Despite the course of both teams already decided – Chennai have qualified for the playoffs and Punjab have crashed out of the tournament – this clash on Sunday afternoon in Mohali can’t really be categorised as a dead rubber. While Chennai will be keen to keep the winning momentum going and thereby seal either of the top two spots on the points table which could allow them a straightforward chance of getting into the finals, Punjab will be playing for the final time this year that too in front of their home crowd. Moreover, a win will ensure that they won’t finish the season as the bottom-ranked team this year.

Chennai might ponder over resting Dhoni since he wasn’t 100% in the previous game but if they don’t, do not hesitate in picking him in your fantasy team. His form has been exemplary this season. Chris Gayle had a decent run and will want to finish things in style.

With Punjab already out of the reckoning, they might give their reserves a chance to play this clash. Fast bowlers have had a good time while playing at this venue in the past and the ball could swerve a bit in the evening. Being a heavyweight in the IPL and in red-hot form, Chennai start favourites to clinch this battle.

Captain: Gayle hasn’t scored a 30 in either of his last 4 outings. The big man is in decent form and would love to sign off on a high. The pace and bounce at Mohali will only help him executing his strokes. He will look to get as many as possible in the first 6 before the Chennai spinners take control of the game.

Vice-Captain: Jadeja shone with both bat and bowl in Chennai’s previous outing which outlined the significance of the all-rounder. His economy rate of 6.37 is his best ever in all seasons of the IPL which outlines his control and accuracy. His ability to hit the long ball is another big advantage at Dhoni’s disposal.

Curran surprised everyone with his enterprising fifty in the previous game. The young all-rounder has had a memorable initiation in the IPL where he showed his worth with both bat and ball. Expect him to conjure up another special performance in his last game of the season. 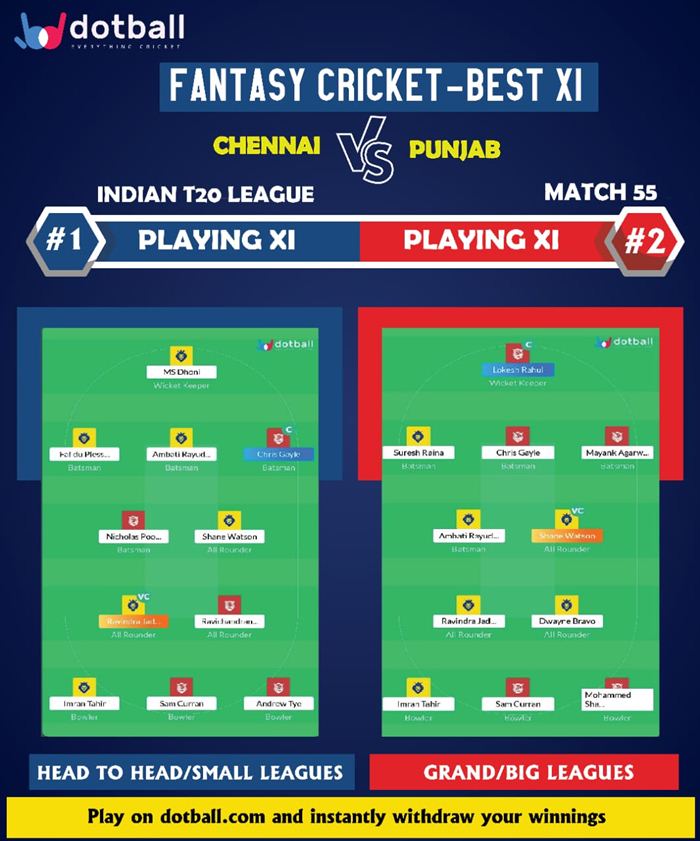 Captain: Rahul might not have looked at his fluent best but has amassed over 500 runs at an average in the north of 50. Being a good player of spin bowling will keep him in good stead against Chennai’s trio of Harbhajan, Tahir and Jadeja.

Vice-Captain: Watson hasn’t contributed at all except for that 96 but is known to raise his game when the stakes are high. He will want to get some runs under the belt before the Play-Offs and Punjab’s lack of experience in the pace department will increase his chances of doing that.

Imran Tahir will have one eye on the purple cap besides wanting to continue his glorious run this season. He will get more bounce at this venue which will make him a more potent force.

Mayank Agarwal has played some breathtaking strokes in the tournament but has the big innings has somehow eluded him. The Indian Test opener will want to change that in his final appearance in IPL 2019. 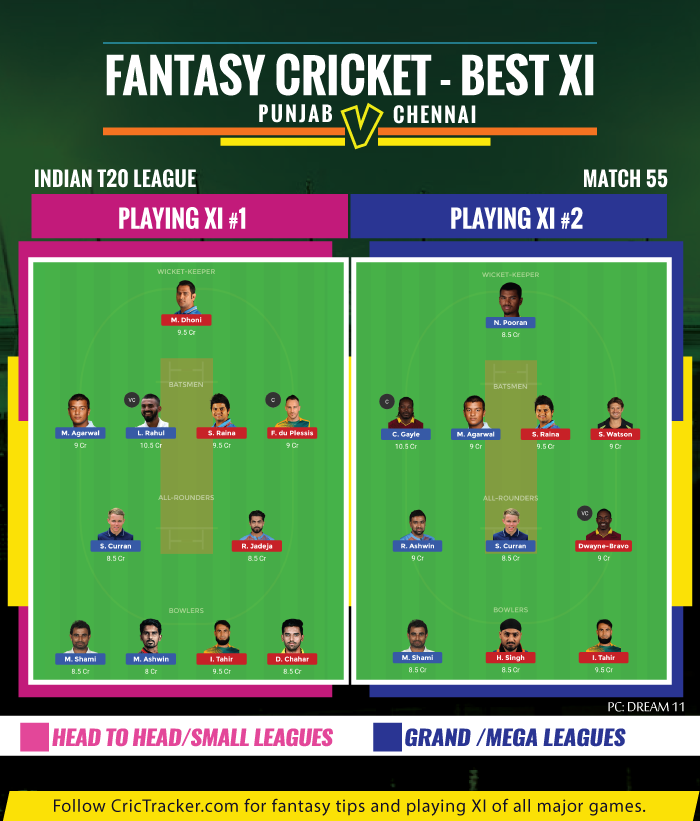 Pooran could really steal the thunder against the Chennai spinners in the middle overs if he gets going. His willingness to take on the best in the business make him a very dangerous player.