All that you need to read before picking your Fantain XI for Mumbai vs Punjab.

Punjab will host Mumbai for their first home game of the Indian T20 league 2019 at the IS Bindra stadium in Mohali on Saturday, March 30th. Punjab won their opening game before losing to Kolkata on Wednesday, courtesy Andre Russell’s knock and Ravichandran Ashwin’s poor bowling and captaincy. Mumbai, on the other hand, have won both their first two games and will be looking to register a hat-trick of wins. On paper, Mumbai look stronger than Punjab due to in-form players. Here’s all you need to know before picking your Fantain XI for the Mumbai vs Punjab game.

Mayank Markande, who had a stellar season last year, could feature in the side as Mohali’s pitch is spin-friendly. Mumbai are in good form and unlikely to make any other changes in their playing XI.

Debutant Varun Chakravarthy who was bought for ₹8 crore had a miserable start to his Indian T20 league career as he was hit for truckload of runs by the Kolkata batsmen. It remains to be seen if Ashwin and the management give the youngster a longer rope or bring in someone else in his place.

Jasprit Bumrah – the death bowler’s bowling has been so sensational, that fans believe he should not be played for the remainder of the tournament to avoid any injuries before the World Cup, in which he will be India’s biggest weapon. His Yorkers can bamboozle the best of batsmen.

Yuvraj Singh – Yuvraj Singh has brought a lot of stability to Mumbai’s middle-order this year. A player who is a must on your Fantain XI, Yuvraj can chip in with quick runs and help lower the required run-rate in a chase.

Andrew Tye – 2018’s purple cap winner, Andrew Tye exhibited various variations in the game against Kolkata. If not for the Australian fast bowler, Kolkata might have made 20-30 runs more than their total of 211.

Chris Gayle – The Jamaican couldn’t contribute much with the bat against Kolkata, but the Mohali pitch is a batsman’s paradise, and if Gayle thrives on it, the contest could well be a lopsided one. Gayle is very unpredictable, which is why he should be on your Fantain XI even after a disappointing performance.

Krunal Pandya – Krunal Pandya could be very crucial to Mumbai on a slow pitch where spinners enjoy an upper hand. Even if Markande is played in the game, expect Krunal to do most of the damage. 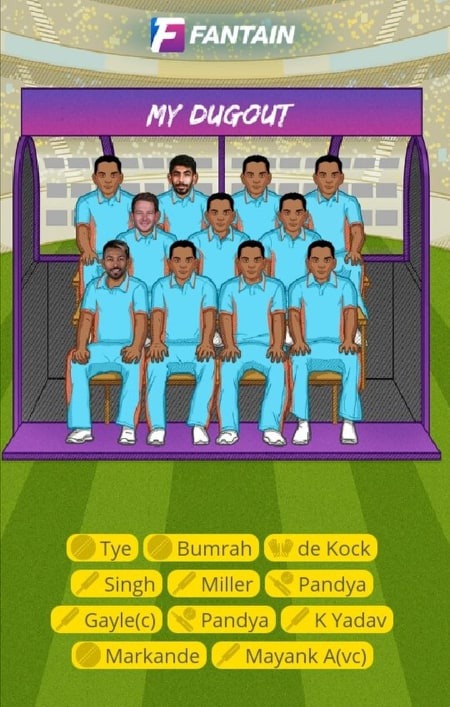