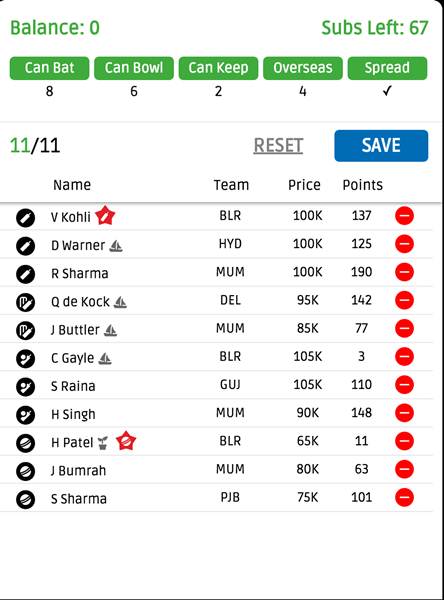 You can expect another belter of a pitch and another high scoring encounter today at the M Chinnaswamy Stadium and thus you need to get in as many big hitters as you can.

Virat Kohli will be the first player I get in for this game. He has revolutionized the way batsman should approach the T20 format and on a flat deck, nothing is going to stop him.

The Mishra threat has forced me to leave out ABD. He does not have a good record against him and also my team combination does not allow me to bring ABD in without transferring out Buttler/Warner, both of whom play their next game tomorrow!

You need to absolutely get in one from Watson and Gayle. The best way to break this down is that you go for Watson if Bangalore bat first and Gayle if Bangalore bat second. This is because, Watson, who would be batting at 4 would get a good chance of influencing the game if RCB bat first. Chasing a high total and coming in at a crunch situation could cause him to succumb to the pressure and give away his wicket.

Quinton de Kock would be my last pick for this game. On a flat wicket with a below average bowling attack, QDK would fancy himself to get at least a 50. Get him in!

For the uncapped player, I get in Harshal Patel if RCB bat second and Yuzi Chahal if RCB bat first.