The bowler caused a huge amount of damage to the Delhi batting line-up as he picked up 4 important wickets.

It was a much important encounter in the Indian Premier League (IPL) for both Kings XI Punjab and Delhi Daredevils as the two franchises had lost their respective last matches. The Delhi side went out to bat first but it was a day they would like to write off from their memories. And the credit goes to Sandeep Sharma who bowled beautifully to restrict a strong Delhi side to the second lowest total of this season’s Indian Premier League.

The Delhi batsman faltered right from the start of their innings and struggled against Sandeep Sharma who bowled a good line and length throughout. Most of the dismissals in the Delhi innings were soft but the Kings XI Punjab bowlers kept it tight building the pressure on the batsmen. The run chase was a fairly easy one with only 68 runs to get.

Martin Guptill of New Zealand and Hashim Amla of South Africa did the job nicely as they both remained unbeaten at the crease finishing the task in just 7.5 overs. Martin Guptill, however, was at his destructive best as he scored 50 runs off just 27 balls which included 6 fours and three boundaries. But the real credit goes to the Kings XI Punjab bowlers who made the task so easy for the batsmen. The Kings XI Punjab now has two crucial points in the bag whereas Delhi continues to stay right at the bottom of the table.

So Sandeep Sharma is CricTracker’s player of the match.

Kept his line and length perfect

Sandeep Sharma himself started the damage early on in the Delhi innings. He has been a brilliant prospect for the Kings XI Punjab over the years and he continued his good form in the Indian Premier League in this season too. The player has been a consistent performer for his franchise throughout the season and has kept his line and length perfect.

This match was no different as bowled at a superb economy rate of 5.00 giving away just 20 runs in his 4 overs. The Delhi batsman found it extremely tough to get runs of the medium pacer as he bowled in the right areas early on in the innings which also gave him the all important wickets. He bowled 14 dot balls out of his 24 which is also quite a thing to be proud of.

The bowler caused a huge amount of damage to the Delhi batting line-up as he picked up 4 important wickets. The first batter to get out of the bowling of the youngster was Sam Billings. It was a delivery which hit the right line and Billings edged it to the wicketkeeper. The next to Go was the dangerous Sanju Samson who looked to hit a Sandeep Sharma delivery to the leg side but the ball went up high hitting the wrong part of the bat. Mohit Sharma completed the catch with much ease.

Sandeep also showed excellent fielding skills of his own bowling. He once again maintained his line and length and Shreyas Iyer could not control his shot which saw the ball come back towards Sandeep. The 23-year-old dived towards his left and took a scintillating catch completing his 3rd wicket. The fourth one was the wicket of Kagiso Rabada who gave a simple catch to Shaun Marsh who took it comfortably.

Sandeep Sharma gets 4.5 stars out of the possible 5 due to his wonderful bowling right from the start to the end. 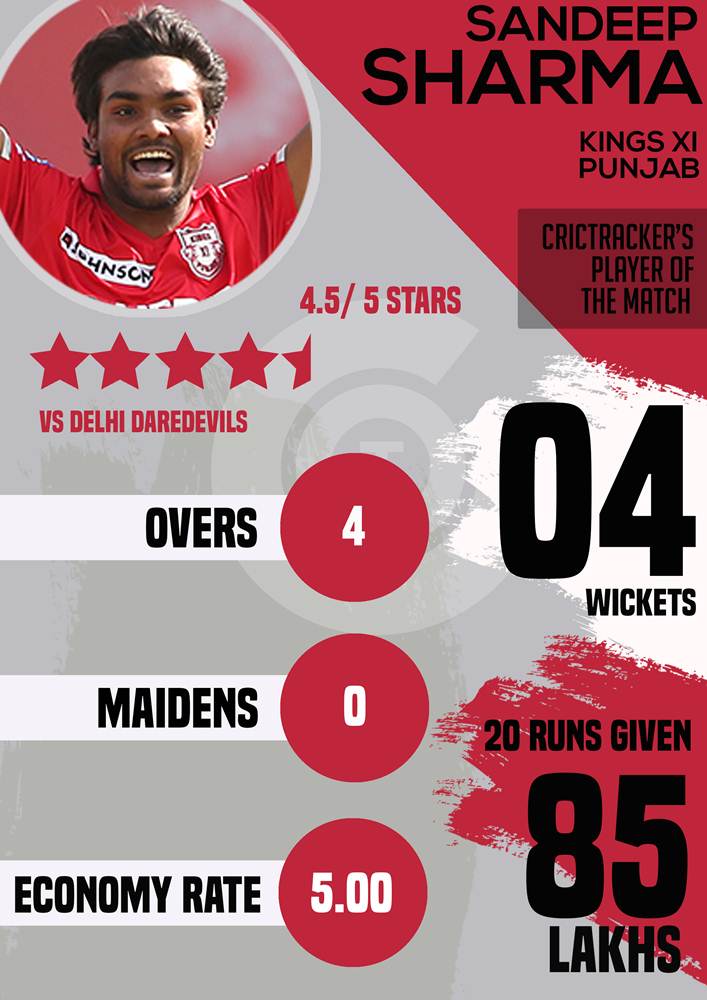