IPL 2018: AB de Villiers is proud of his team after pulling off a thrilling victory

IPL 2018: AB de Villiers is proud of his team after pulling off a thrilling victory

De Villiers himself was at his best and his knock of 69 runs won the game for his side.

The Royal Challengers Bangalore (RCB) kept their hopes of qualifying for the playoffs alive with a exhilarating win over the Sunrisers Hyderabad (SRH). Their fortunes have been hanging by the thread for last few games now and they have peaked at the right time. The matches have gone down to the wire but their bowlers have kept their nerves much like they did last night and steered their team to a victory. However, AB de Villiers was happy after a hattrick of wins and was proud of the effort put by his teammates.

The Superman from South Africa himself was at his best during the game and went on score 69 runs off just 39 balls. He was in the zone after coming in to bat in the second over and just blazed away from the word go. He shuffled nicely around his crease to bluff the bowlers and his only six of the night went on the roof of the Chinnaswamy Stadium. The best moment in the game came when he took a scintillating while fielding at the deep mid-wicket to dismiss Alex Hales.

The batsman had smacked the short ball from Moeen Ali and it was travelling towards the stands but De Villiers ran in and timed his jump to perfection. He grabbed the ball while in the air and brought his body inside the boundary line which sent the spectators into a frenzy.

The game went right down to the wire courtesy the brilliance from Kane Williamson and Manish Pandey. But the likes of Tim Southee and Mohammed Siraj landed their yorkers and used their variations well to keep a lid on the run-scoring when 35 were needed off the last two overs. De Villiers took to his official App ‘AB 17’ to express his delight and also the crowd of th Chinnaswamy Stadium for supporting them to the fullest.

“This Team! What a game last night against the Sunrisers! So proud of them for pulling together to give the supporters at Chinnaswamy something to cheer about! The atmosphere in the Stadium was electrifying!” he said. They will now have to win their last league game against Rajasthan Royals (RR) and also keep their NRR more than Mumbai Indians (MI) in order to go through if KKR wins their last game against the SRH.

Here’s what AB de posted on the victory 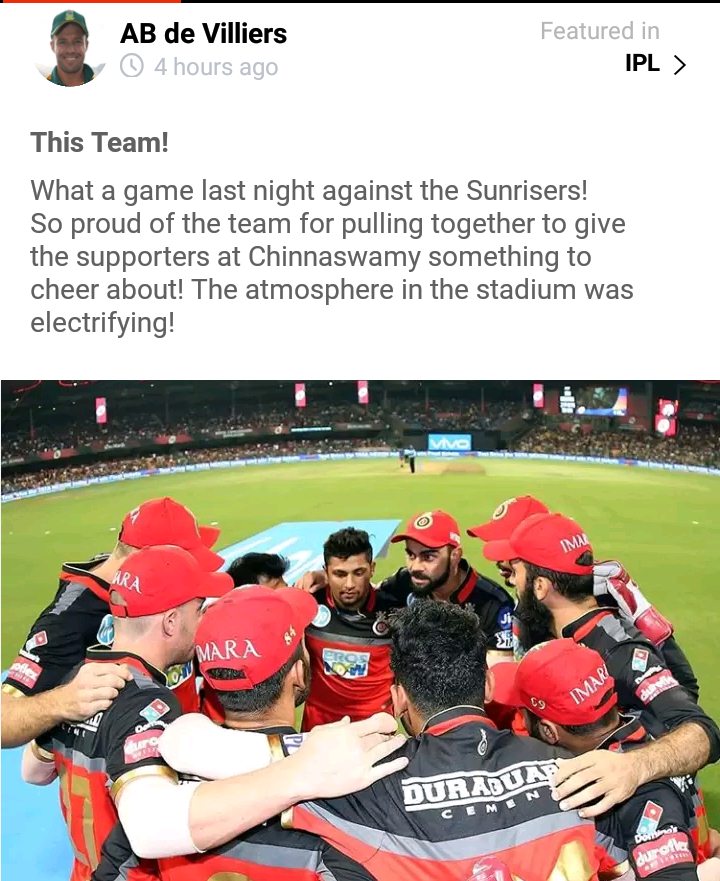