IPL 2018, Final, CSK vs SRH Match Prediction: Who will win the final?

CSK need to be smart and make sure they see off Rashid Khan and don’t let him do too much of damage.

Anyone who has followed the Indian Premier League (IPL) 2018 closely would have no complaints about the finalists of the tournament. Over the course of the round robin phase and the playoffs, the Chennai Super Kings and the Sunrisers Hyderabad proved that they were the two best teams on show and richly deserved to be in the finale.

Both teams have had three encounters this season already and it’s the CSK which has emerged the winner all three times. However it was a similar scenario in IPL 10 as well where the Rising Pune Supergiant had beaten the Mumbai Indians thrice before reaching the final, but it all turned around when it mattered as Mumbai got the better of RPS on the big final night and clinched the trophy. That’s something Hyderabad can take heart from.

Generally, Wankhede happens to be a good batting deck, but this season the wickets there have been quite slow and sticky which is why we haven’t got to see too many high scoring games at this venue. If the surface is slow again tomorrow, batting might not be the easiest, but the thing with Wankhede is that dew plays a huge role there in the dying stages of the game and if you are a chasing team, you remain in the game even if you lose a few wickets because it gets very difficult for the bowlers to hold the ball and land it in the right areas in the last 5 overs of the second innings. Both captains will surely want to bowl first.

Faf du Plessis’ selection for Qualifier 1 raised many eyebrows as there was a strong school of thought that tinkering with the opening combination of Shane Watson and Ambati Rayudu which had been going so well was not the right call. But du Plessis showed what experience can do in big games as he kept his calm under pressure in pursuit o 140 despite the regular fall of wickets at the other end and eventually dragged his team over the line. His spot in the XI is well and truly cemented now.

Shardul Thakur went for too many runs in the last game, but CSK doesn’t really have any quality alternative for him in the squad. They gave KM Asif a few games in the preliminary stage, but the Karnataka pacer looked too raw for this level as he bowled with directionless pace and offered easy scoring opportunities to the batters. The chances are very slim that MS Dhoni will prefer Asif over Shardul.

Hyderabad picked Khaleel Ahmed as a surprise package for the Qualifier 2, but the southpaw couldn’t grab his opportunity with both hands. While he cranked up good speeds, the lines and lengths were erratic right through his spell. He was also not able to shape the ball back into the right-handers which is the natural variation of the left-arm quicks.

Khaleel is likely to be dropped for Sandeep Sharma who might not have the same sort of pace, but he is certainly more skilful in comparison and will provide Hyderabad more control with the ball.

Death bowling is an area to ponder for CSK. Apart from Lungi Ngidi, nobody has been able to hold his shape bowling late in the innings. Thakur has bowled length time and again and has been dispatched, while Dwayne Bravo has overdone his variations and has become predictable. However, because of the fact that Bravo is highly experienced and has been a part of such pressure games before, he is the one MS Dhoni might turn to again to do the job along with Ngidi.

Hyderabad’s bowling attack has been hailed as the best in the tournament, but they also have loopholes in their bowling. Bhuvneshwar Kumar and Shakib Al Hasan have not been at their best, while Carlos Brathwaite has hardly got a single Yorker right in the couple of games he has played.

CSK need to be smart and make sure they see off Rashid Khan and don’t let him do too much of damage. The Afghan leggie has been the wrecker-in-chief for the IPL 9 champions, getting regular wickets in the middle overs and pushing the opposition on the backfoot. If he is played smartly and denied a wicket, Hyderabad’s job will be very tough against the mighty batting of Chennai.

The prediction is for the Chennai Super Kings to beat the Sunrisers Hyderabad in this final and win the IPL 11. 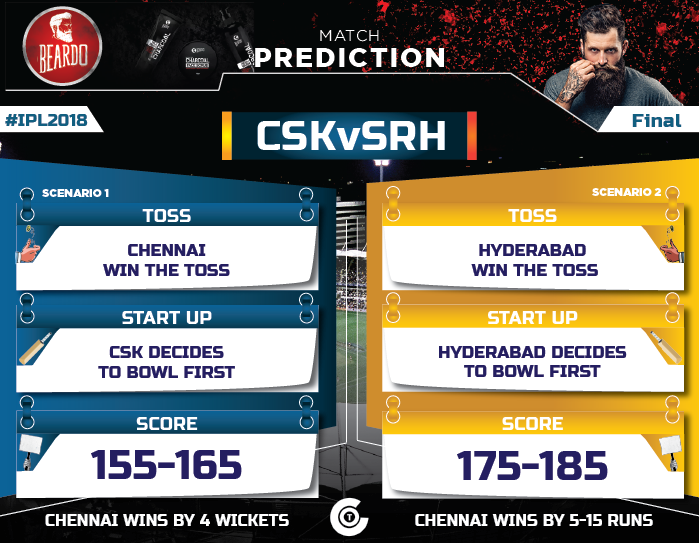