IPL 2018: Final, CSK vs SRH – Most Valuable and Liable Player of the game

Shane Watson walked through the chase after a slow start with his unbeaten 117-run knock.

Chennai Super Kings (CSK) levelled the Mumbai Indians‘ feat of three Indian Premier League titles with a dominating performance in the final against the table toppers Sunrisers Hyderabad. The comeback team broke the jinx of no team defeating an opponent four times in a season with a convincing eight-wicket win. Sunrisers fought well to finish with 178/6 on the board which looked a defendable total. However, Shane Watson walked through the chase after a slow start with an unbeaten 117-run knock to take his team over the line with nine balls to spare.

Shane Watson, who was not 100% fit started his innings by playing out a maiden over against Bhuvneshwar Kumar. He scored his first runs on the 11th ball he faced and never looked back. The former Australian struck 11 fours and eight sixes during his 57-ball stay and changed the game completely towards the Chennai Super Kings with a 27-run 13th over bowled by Sandeep Sharma.

He was undoubtedly the Most Valuable Player of the match as his innings was valued at 1.3 crores as per the CricTracker’s Player Value Algorithm. Siddarth Kaul was the Liable Player conceding 43 runs in his three overs. The pacer failed to recreate the good returns he showed at the start of the tournament.

Kane Williamson and Yusuf Pathan couldn’t add much to their name in the previous game but were good in the final. Williamson scored a 36-ball 47 and steady the innings after early wickets while Yusuf struck 45 runs in 25 balls to accelerate the Sunrisers Hyderabad‘s run-rate. Yusuf’s match value of 49 lakhs was equivalent to 3.6 times his average match salary. Williamson’s match value of 51.5 lakhs is the 2nd highest after Watson in this match which shows how well the Australian dominated the final. Lungi Ngidi’s four overs went for just 26 runs for one wicket that was valued at 21 lakhs and was important in containing SRH’s total by 10-15 runs. The man of the finals, Suresh Raina scored 32 off only 24 balls and was crucial given the start his team got in this crunch match. His match performances earned him a value of 39.5 lakhs which is second best for CSK after Watson. 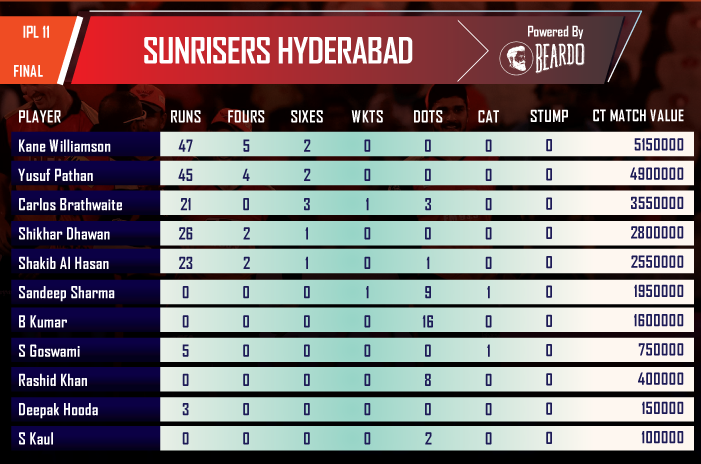