IPL 2018: How can Royal Challengers Bangalore qualify from here on?

IPL 2018: How can Royal Challengers Bangalore qualify from here on?

RCB will have to rely on the results of other teams to have a chance of finishing in the top four.

The 2018 season is turning out to be yet another sorry story for the Royal Challengers Bangalore as their hopes of getting their hands on the first IPL title are set to be diminished for yet another year. The Virat Kohli led team started the season with a visibly weak bowling attack for the death overs and as they tried to fix it their batting failed to cope up with the pressure in crunch games and they succumbed to seven losses in ten matches. Hereon, RCB can finish with a maximum of 14 points this season which might not warrant them a spot in the playoffs as the teams have qualified with 16 points in the last two seasons.

Scenarios that can ensure RCB qualify with 14 points:

The Royal Challengers will have to rely on the results of other teams to have a chance of finishing in the top four. They will be facing Delhi Daredevils, Kings XI Punjab, Sunrisers Hyderabad and Rajasthan Royals respectively in their remaining four matches and they need big wins to improve their NRR which is certainly going to be a crucial factor in their bid to make it through.

KKR are currently placed at No.4 on the points table with five wins in the ten matches. They should not win more than two matches here on. It will bring down the situation to two or more teams tied at 14 points for the 4th spot with SRH, CSK and KXIP in the top three spots with 16+ points. MI and RR are the other two teams who can finish with 16 points but with both the teams set to face off one has to end up with only 14 points. As RCB will play RR once, they will want the Royals to win their match against Mumbai.

RCB will need some luck to finish alongside KXIP on 14 points. The Punjab franchise currently has 12 points in their kitty and will be playing RR, KKR, RCB, MI and CSK respectively. If KKR win more than two matches from their remaining four, they will jump ahead of KXIP, RCB and the remaining teams with 16 points in their account. In such scenario, Bangalore will need KKR and MI to win their respective matches against KXIP and one of KKR and RR to beat MI.

Case 3 – Chennai Super Kings win none of their remaining matches:

CSK are well settled to finish among the top two with seven wins in ten matches and will now play RR, SRH, DD and KXIP. RCB can be benefited if the Super Kings end up losing all those four matches. CSK could end up with 14 points and be left fighting for the final playoffs berth alongside RCB and even MI and RR.

If CSK indeed lose all their four, RCB can even finish among the top two with results of the Kings XI and Knight Riders matches going their way. This could bring things down to a position where 5-6 teams are tied on 14 points while SRH and DD well settled at the top most and bottom most place of the table respectively. RCB need huge wins in all their four matches to have the remote chance of finishing at No.2.

Scenarios for qualifying with 12 points:

The Royal Challengers will still have a chance if they lose one of their remaining four matches but they will need loads of luck for that to work. Even if they end up losing to SRH, they have to defeat DD, KXIP and RR at any cost that too with significant margins.

Case 1 – Kolkata Knight Riders should not win more than one match:

RCB will have a chance of finishing among the top four if KKR lose three of their remaining four matches and the bottom teams MI and RR face defeat in at least two matches. They will be fighting for the 4th spot alongside KKR, MI and RR with SRH, CSK and KXIP taking the top three positions.

Case 2 – Kings XI Punjab must not win a single game:

RCB need KXIP to lose their remaining matches if KKR finishes with seven and more wins. With that, the results of RR and MI matches also have to go RCB’s way. Then we can have a mini-battle for the 4th playoffs spot with teams tied on 12 points. 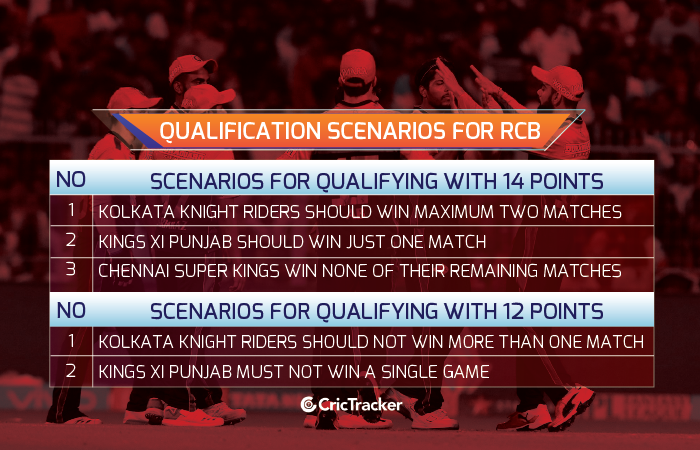