The winner of KKR and RR game could end up playing in the Eliminator match.

The 11th edition of the Indian Premier League (IPL) set to witness a stiff battle in the final week of the league stage with as many as five teams in contention for two playoff spots. Sunrisers Hyderabad and Chennai Super Kings are the only teams to confirm their playoffs berth with 18 and 16 points respectively. Delhi Daredevils are confirmed to finish in the bottom four with only three wins in the 12 matches. With the amount of competition down the table, there is a chance of at least one team finishing in the top four with 14 points after 16 points being the minimum in the previous two seasons.

In fact, there is a marginal chance of teams making it to the playoffs even with 12 points this year. In such case, one of the Rajasthan Royals and Kolkata Knight Riders will be the 3rd team to fix their spot in the top four and remaining four teams will be fighting for the remaining one position. However, for this to happen, results of at least seven of the remaining eight matches should go in the required way. Mumbai Indians will have the best chance given their superior NRR in the scenario of teams finishing with 12 points. However, RCB improving their NRR with a couple of big wins can’t be ruled out.

Kings XI Punjab should lose their remaining three matches i.e. against RCB, MI and CSK. At the same time, Mumbai Indians should lose their final league match against Daredevils after defeating KXIP which extends their points tally to 12. The results of 49th, 51st, 53rd and 54th match including RCB, RR and KKR will decide the chances of 12-point qualification. The results of 51st, 53rd and 54th match can be expected based on the winner of KKR and RR match.

If KKR defeats RR at their home, RCB has to lose against Sunrisers in their 13th game and defeat Royals in their final match.

If RR comes out as winners at the Eden Gardens, RCB will have to win either against SRH or RR. At the same time, KKR should also lose against SRH in their last league match.

Here are the required possibilities: 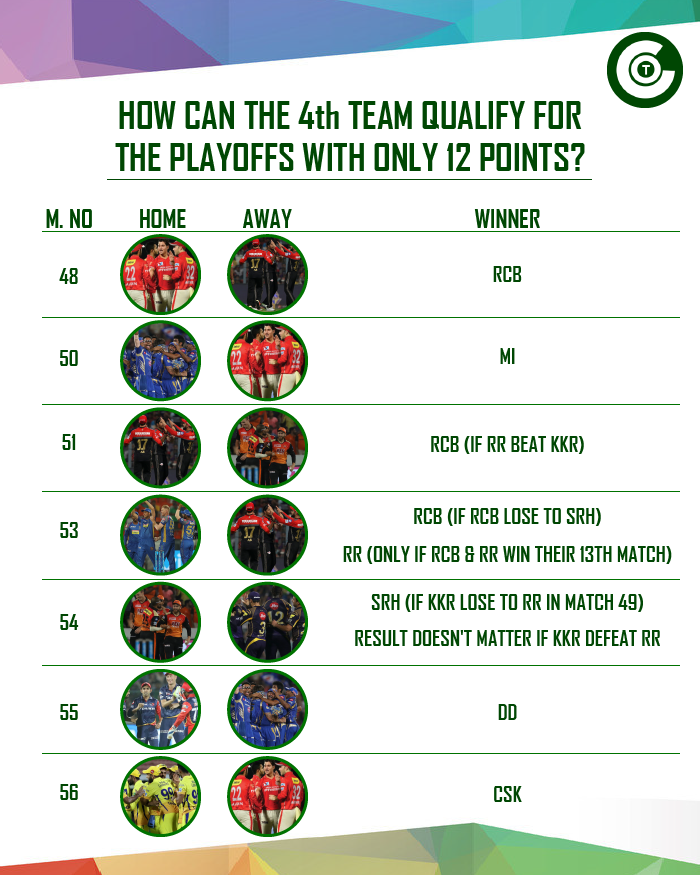