Dwayne Bravo dismissed Rohit Sharma more than any other batsman in the IPL so far.

Rohit Sharma’s IPL career can be separated into two parts. The first part is until 2014 where he was known for turning the games in his team’s favour with the bat. However, since 2015, Rohit turned out to be a captain who could turn the games with his calm and tactical captaincy from critical stages. In this period, the Indian vice-captain wasn’t at his best with the bat. It was witnessed in the previous season where he managed only 333 runs but led the Mumbai Indians to their 3rd title.

Rohit scored 582 runs in 15 innings at an impeccable average of 52.15 as an opener since 2015. However, his average slips to 25.78 in the last three years when he did not open. He scored 722 in 31 innings while batting at No.3 and a lower spot which used to be his forte till 2014. In the coming season, Mumbai Indians will require Rohit to bat at No.3 with the likes of Evin Lewis and Ishan Kishan opening. The franchise hopes their skipper to anchor the innings with another youngster Surya Kumar batting at No.4.

To get going in the tournament, Rohit Sharma can target Chennai Super Kings’ bowling in the first game. The comeback CSK team doesn’t possess a threatening bowling line-up which could help Rohit to gain some momentum in the middle order. For that to happen, Rohit should play out Dwayne Bravo against whom he was always found out. The medium pacer dismissed Rohit five times in the 58 balls he bowled in this league.

Rohit Sharma vs Dwayne Bravo in the IPL: 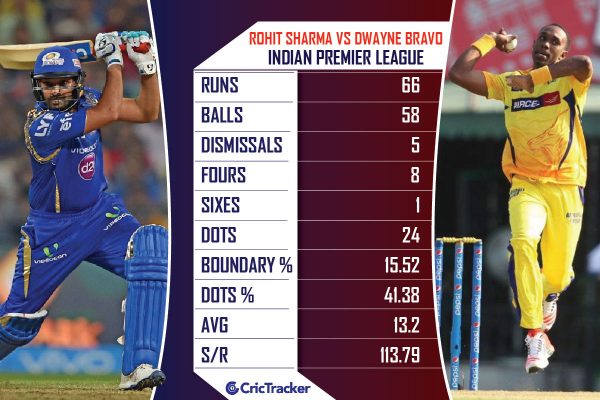 The MI skipper often faced issues against medium pacers in the tournament as Vinay Kumar claimed Rohit’s wicket on six occasions. The likes of Dhawal Kulkarni and Siddharth Trivedi too had Rohit’s number on four occasions. The Indian opener has a dot ball % over 40 against them and ends up holing out regularly for making up for the dots. Rohit stands at the top in Bravo’s bunnies in the IPL as the Windies all-rounder dismissed his current team-mates Suresh Raina and Harbhajan Singh on four occasions apiece.

Troublemakers for Rohit Sharma in the IPL: 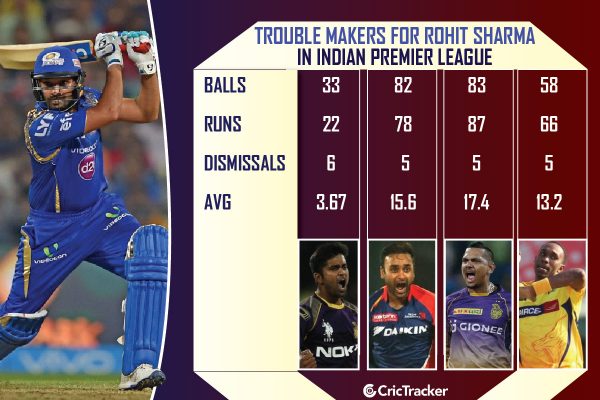 Dwayne Bravo’s bunnies in the IPL: 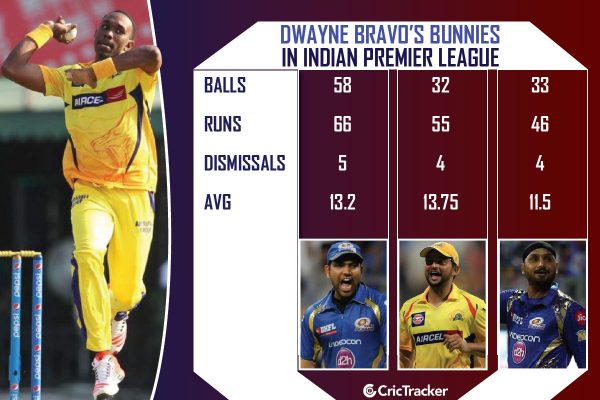