Shakib Al Hasan made the biggest impact in the match with his all-round performance.

Sunrisers Hyderabad (SRH) once again stuttered towards the victory but finally managed to do it without much fuss against Kolkata Knight Riders (KKR) in their own den. It was the partnership between Kane Williamson and Shakib Al Hasan which had won the game for them. However, the bowlers of the visitors were at it once again who set up the match undoubtedly and made it a hat-trick of victories for the Orange Army.

Though Bhuvneshwar Kumar will remain on top in the summary of the scoreline as he took three wickets, it will never show how well Shakib Al Hasan bowled. Yes, Bhuvi was excellent in his comeback and bowled in the death overs to restrict the opposition. But the veteran Bangladeshi cricketer was into the attack when Chris Lynn was well set and he was joined by Sunil Narine who was specifically sent to attack the left-arm spinner.

Shakib came into the attack with KKR looking to attack with Lynn set to launch an assault given the way he plays. But he didn’t give him any room whatsoever by pushing the ball by bowling the arm ball. Once it skidded on and took the inside half of his bat as the batsman was saved. He gave only 3 in the first over. In the next over, after an hour-long break, Nitish Rana was dismissed as Narine strode out to the middle.

Once again in his second over, Shakib kept the ball away from Lynn who was looking to swing his bat. All deliveries bowled to him were either flat or away from his swinging arc. Even that over went for just 4 runs and the pressure began to build on the hosts. It showed in his next over as Narine blindlessly swung wild at everything. He was lucky a couple of times but the third time when the ball went in the air, the skipper Kane Williamson himself made sure that he didn’t drop.

However, the next over saw the big fish getting out as Lynn just chipped back the arm ball which stuck a bit in the pitch. Shakib was quick to pouch on the catch with a stretched dive and all the hopes of KKR to post a big total were dashed. It was a magnificent spell from the 31-year-old and made two of KKR’s main batsmen desperate for the big shots and got them eventually.

He also made an impact with the bat after coming in to bat with KKR bowlers all over the visitors. The ball was turning and the wrist spinners of the home side were making life difficult for SRH. However, Shakib played few wonderful strokes and brought out seep strokes which worked in his favour. Eventually, they won the game which was crucial at the end of the day.

Much like Shakib, Sunil Narine was the man for his team. While SRH began their chase quickly courtesy Wriddhiman Saha, it looked like the game would finish early. But Narine struck first ball though it was not his best ball. The wicket set the tone for him as he accumulated dot balls to increase the pressure on the batsmen. His next over though saw him pick the most valuable wicket of the match.

Shikhar Dhawan played all across the off-spinning delivery only for it to hit his pads and ricochet towards the stumps. This brought the KKR fans alive who were quiet until then and the pressure was all the way on the visitors again. Narine’s figures after two overs read 2/4 and it felt like he would run through the line-up. By the time he came back into the attack, the batsmen in the middle were set and they manipulated him easily. Even the last over of his spell couldn’t make much of the difference.

But the way he bowled kept his team and should be given the credit for the same.

Here’s our rating of the match: 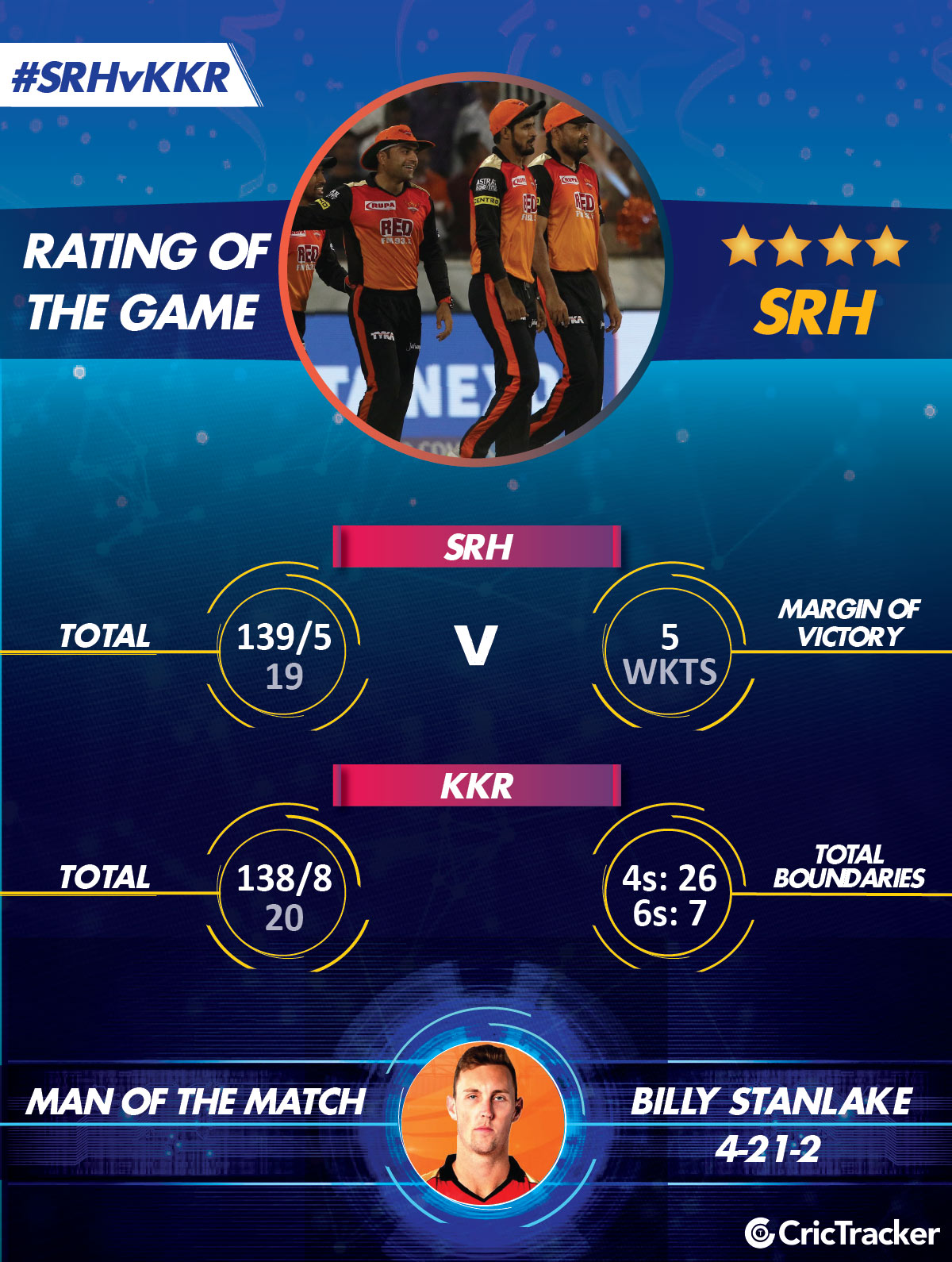