RCB had a formidable lineup in their previous games, but they haven’t quite set the stage ablaze.

Both Royal Challengers Bangalore (RCB) and Rajasthan Royals (RR) have had similar fortunes in their opening games of the ongoing season of the Indian Premier League (IPL). They stumbled in their away games but stamped their authority during their home matches. RCB had a formidable lineup in their previous games, but they haven’t quite set the stage ablaze.

Their bowling faltered in the opening game against the Knights, which led to their demise. In the second game, while their bowlers did reasonably well, their batsmen stumbled at crunch moments of the game. Going into their third game, RCB would like a more comprehensive performance from the players. In our article, we take you through their probable playing eleven against the Royals in Bangalore.

Brendon McCullum and Quinton de Kock will be the openers against the Royals. Both of them have done well in one game and floundered in the other. McCullum was severe against the Kolkata Knight Riders (KKR) and took RCB off to a flying start. However, he perished for a golden duck against Punjab, during the run-chase of the Challengers.

Quinto de Kock couldn’t make an impact in RCBs opening game at the Eden Gardens and succumbed to a reverse-sweep early in his innings. Nevertheless, the South African wicket-keeper batsman made amends and carved a healthy half-century stand with AB de Villiers which paved the way for their maiden victory of the season.

Virat Kohli hasn’t had a delightful outing thus far having got out cheaply on both occasions. The spinners have got the better of him thus far, but he has the temperament to stage a comeback. AB de Villiers looked has been exceptional in the two matches. Against the Knights, he looked ominous and he replicated the touch against Punjab as well.

Sarfaraz Khan hasn’t been able to provide the impetus lower down the order and would dearly wish to find his touch going ahead in the tournament. On the contrary, Mandeep Singh has chipped in with a couple of useful knocks under his belt. Against some efficient bowlers of the Royals, the middle order needs to step up for RCB to dictate terms.

Chris Woakes has been expensive thus far with the leather. Meanwhile, he has also picked up some crucial wickets for the Challengers, both during the early and death overs. He dismissed the likes of Chris Lynn and Andre Russell against the Knight Riders.

He was taken for runs by KL Rahul and Mayank Agarwal and was erratic in the early overs. Nevertheless, being an all-rounder, RCB would wish for him to fire with the willow as well. The English cricketer has to be on top of his game if RCB are to get the Royals on the mat.

The bowling was lacklustre during the opening game, however, they have made a strong statement by bowling Punjab out. Umesh Yadav was impressive against KKR and he followed it up with a spell which turned the game on its head. Washington Sundar, who was carted by Sunil Narine and Co, restricted Ravichandran Ashwin’s men.

Left-arm pacer Kulwant Khejroliya, who didn’t have a memorable outing against KKR, also struck form as he nipped out the crucial scalp of Karun Nair, who threatened to take the game away from the Challengers. Yuzvendra Chahal’s form has been a matter of concern as he has been taken for runs pretty effortlessly by the opposition batsmen.

Here’s the RCB Predicted XI for the game against RR 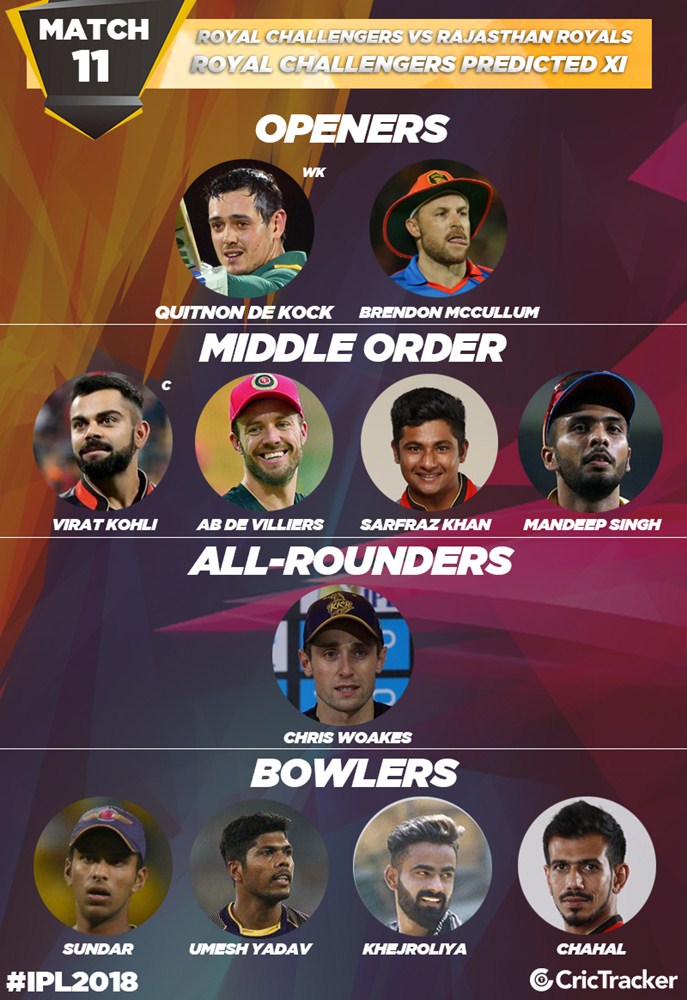