An MS Dhoni special is expected whenever his team faces Kings XI Punjab as some of his knocks against them will remain among the IPL classics. Be it a sensational finishing at Dharamsala to take his team into playoffs in the 2010 or the final over in Vizag to help Rising Pune Supergiant escape a bottom finish in the 2016 season. It will be interesting to see what Dhoni can offer in the game against his happy hunting team given his recent exploits in the T20 format. Dhoni scored a 28-ball 25 in the previous game against KKR when his team was chasing a 200+ total.

Dhoni will be facing his go-to men Ravichandran Ashwin and Mohit Sharma in the game to be played at the Mohali’s PCA Stadium. Both the bowlers made their IPL debut for CSK and went on to represent India under Dhoni’s captaincy only. Ashwin and Mohit were a crucial part of the CSK squad before they received a two-year ban. Chennai Super Kings couldn’t retain or buy back the two players on their return. Dhoni might need to play a bigger role with the bat in the absence of Suresh Raina. 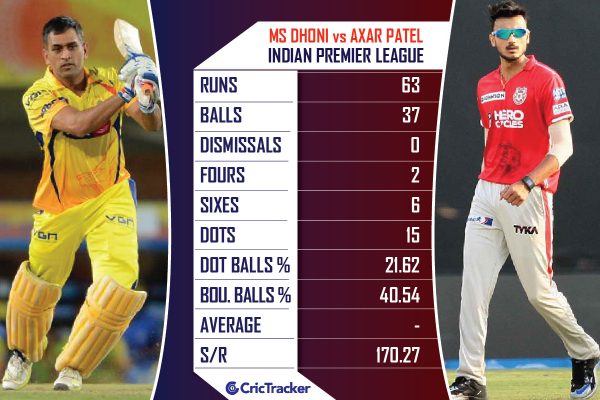 CSK have already lost the services of Kedar Jadhav in the middle order for the rest of the season. Dhoni will be playing a crucial role in tackling the KXIP’s spin attack consisting of Ashwin, Axar Patel and Mujeeb Zadran in the middle overs. Dhoni might feel comfortable against Ashwin having faced him a lot in the nets but need to play out Mujeeb’s mystery. At the same time, Dhoni will back himself to score big against Axar Patel. Dhoni always struggled to play the left-arm spinners in the IPL but was harmless against Axar.

MS Dhoni clobbered Axar Patel for six sixes in the IPL so far which are the joint-most for him against any bowler. The CSK skipper scored 63 runs in 37 balls against Axar in the IPL without getting dismissed. He scored more runs against only two other bowlers in IPL without being dismissed even once. Dhoni has a dot ball % of 21.6 against Axar and boundary balls % of 40.54.

Most sixes for MS Dhoni against any bowler in the IPL: 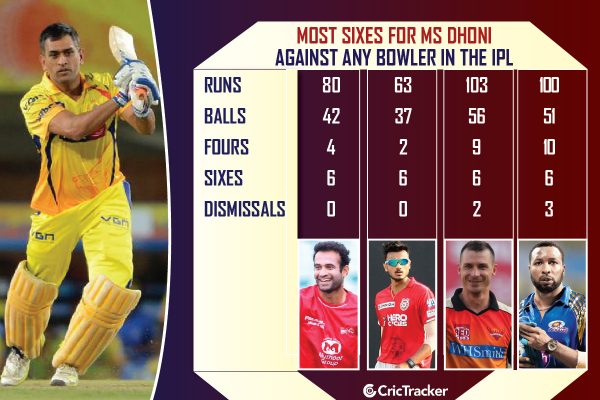