Gautam Gambhir and Rishabh Pant can tackle the threat from KKR's spin trio.

The game at the Eden Gardens between Kolkata Knight Riders and Delhi Daredevils will be a homecoming for Gautam Gambhir who captained the home side to IPL title twice in the previous seven seasons. DD historically struggled in Kolkata as they won only once in the seven IPL games against KKR at this venue. They would like to change their record at this historic venue with Gautam Gambhir on their side, who led KKR to four home wins in the previous five seasons against them.

KKR’s spin attack will be key in bringing them back into winning ways as their pace attack not been up to the mark in the tournament. Delhi have Gambhir and Rishabh Pant in their top order who are comfortable against spinners. Jason Roy, who made dream debut for DD, might be troubled by the likes of Sunil Narine, Piyush Chawla and Kuldeep Yadav. The ultimate showdown will be between the KKR spinners and Glenn Maxwell. The Australian had a brilliant domestic season and is due big knock in this tournament.

Glenn Maxwell vs KKR’s spin trio in the IPL: 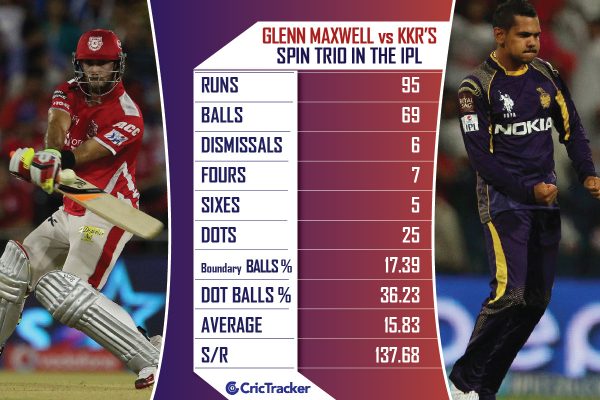 Maxwell collectively scored 95 runs and got out six times against the Kolkata Knight Riders’ spin trio in the IPL. He averages only 15.83 against them and scored runs at an S/R of 137.68. Maxwell has a history of getting out to leg-spinners in the IPL. Amit Mishra claimed Maxwell’s wicket on four occasions in the IPL but was roped by DD along Maxwell in the auctions. Piyush Chawla too dismissed Chawla on three occasions not before Maxwell took him for 51 runs in only 30 balls in the IPL.

Glenn Maxwell’s real struggle among the KKR’s bowlers is against Sunil Narine. The ever mystery spinner bowled 34 balls in the IPL to Maxi giving away only 30 runs. Narine had Maxwell’s wicket on two occasions and has a dot ball percentage of 44.12 against the former KXIP player. The Australian all-rounder has a history of tearing Kuldeep Yadav apart recently. Maxwell hit four boundaries in a row including hat-trick sixes in the Chennai ODI and consecutive sixes in the Kolkata ODI against the left-arm wrist spinner. Kuldeep got the wicket of Maxwell during the last year’s IPL game after he was hit for back to back sixes.

Glenn Maxwell against KKR’s spinners in the IPL: 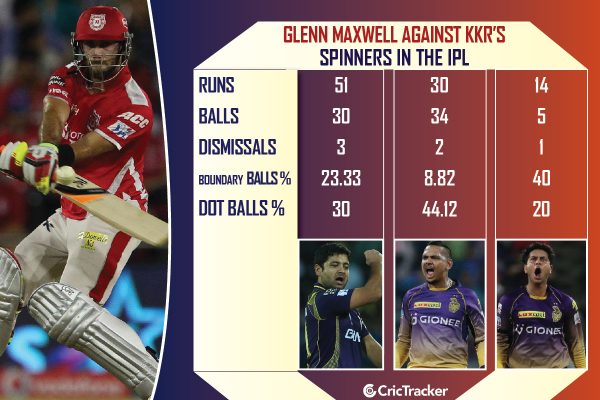