Mumbai Indians returned strongly after losing two wickets with the first two balls of the game.

Mumbai Indians brought an end to their wait for the first win of the season as the defending champions crushed RCB by a huge 46-run margin. The home team were 0/2 in 0.2 overs which is the joint-worst start to an IPL inning. Rohit Sharma batted through scoring a 52-ball 94 as Mumbai posted a huge score of 217/6 in their 20 overs. Evin Lewis was crucial in their recovery with a quick-fire 65 helping them to score at ten an over in the powerplay.

The run-chase was all about Virat Kohli who scored an unbeaten 62-ball 92 with his team managing only 167/8. The RCB skipper accounted for 55% of his team’s score in the game. Rohit, who won the man of the match award, turned out to be the most valuable player of the game for his 94-run knock as per the CricTracker’s player value algorithm. The MI captain hit five sixes and ten fours during his innings as his performance was valued at 1.09 crore which is equivalent to his average match salary. 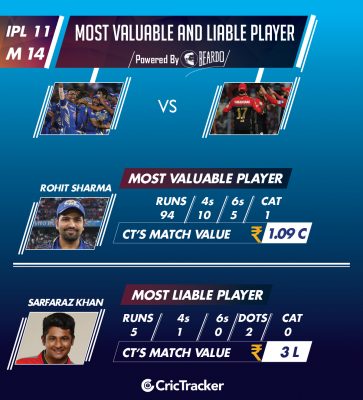 RCB’s young batsman Sarfaraz Khan turned out to be the liable player as he scored only five runs coming to bat at No.7. MI’s Kieron Pollard and Mustafizur Rahman valued lower than Sarfaraz but were lucky to be ending up on the winning side. Kohli’s wasn’t behind Rohit Sharma as the RCB captain’s knock was valued at 99.5 lakhs. The left-handed opener from Windies gained a value of 73 lakhs for his 65-run knock that included six fours and five sixes. 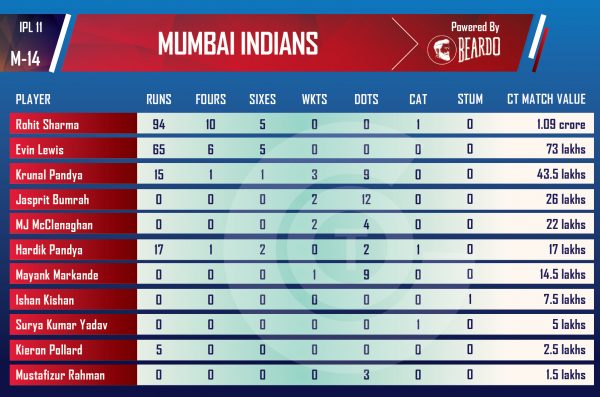 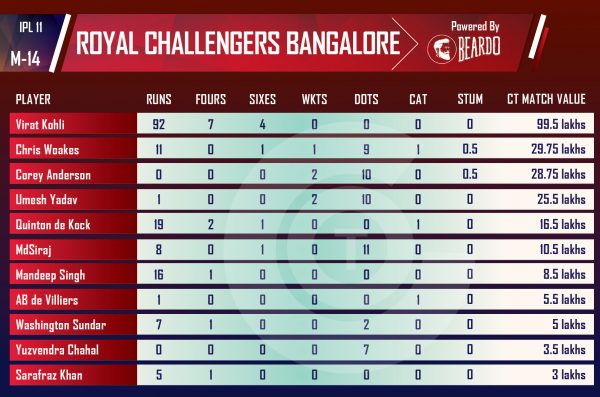