The defending champions put on a complete performance on the night.

Mumbai Indians put on a complete performance finally to win their first game of the tournament and have officially begun their title defence this season. Rohit Sharma came to the party on the night for them with a blistering knock of 94 runs even as Evin Lewis continued his fine form at the top of the order. The bowlers, in the second innings, completed the job as Royal Challengers Bangalore (RCB) crumbled under pressure. However, one felt for Virat Kohli who opened the innings and fought till the end for his team with a brilliant outing with the bat.

Rohit Sharma strode out to the middle with his team in tatters at two down off the first couple of deliveries of the game. They needed a calm head out in the middle and who better than their captain would do that! He played second fiddle to Evin Lewis who went hammer on tongs in the powerplay overs despite losing wickets. Though he was dismissed soon as the innings entered its second half and then Rohit took control.

While he had got himself going soon after coming out to bat, he started accumulating fours in the post powerplay phase. His four off Corey Anderson when he stepped out and clobbered the not so short ball over cover. There was some immense power behind the shot and even the commentators on air were in awe of the Hitman. Rohit is known to hit sixes at ease but the skipper was determined and he avoided taking risks early in his innings as he had smashed only 1a solitary maximum until the 15th over.

Umesh Yadav suffered the heat though in the 15th over as the first ball off his new spell was smoked over square leg into the first tier after pitching short. It was literally disdainfully dispatched by Rohit as the death overs officially began for Mumbai Indians. It is almost impossible for him to get out after getting his eye in and it proved once again as the captain led from the front only to be dismissed in the final over. He whacked 10 fours and 5 sixes during his stay in the middle.

It’s something about Mumbai Indians and Mitchell McClenaghan. He went unsold in the auction but then Jason Behrendorff got injured and the franchise picked him. The Kiwi pacer playing his second game wins ended the chase in the powerplay by taking the wickets of Quinton de Kock and AB de Villiers.

His first over had gone only for 7 runs which had stopped the run-flow after RCB got off to a flier in the first couple of overs. However, his second over brought more laurels to him as Quinton de Kock stepped out to a full ball which tailed back only a little bit. But that was enough for the ball to castle him as the Wankhede erupted in joy as their team made the first dent in their opposition’s tall chase.

Though the prized wicket of the day was yet to come as AB de Villiers came out to bat. But the South African fell into the trap set up by the Mumbai Indians. The short ball pitched in the middle of the wicket was screamed with all the power only to give catching practice to the deep mid-wicket fielder where Hardik Pandya was stationed. The chase virtually ended at that moment and even though Virat Kohli tried his best in the end, there were no wickets in the hand.

Mumbai Indians got off the mark finally in the tournament with an easy victory against RCB and they would hope to continue their winning run now.

Here’ CricTracker’s rating of the match: 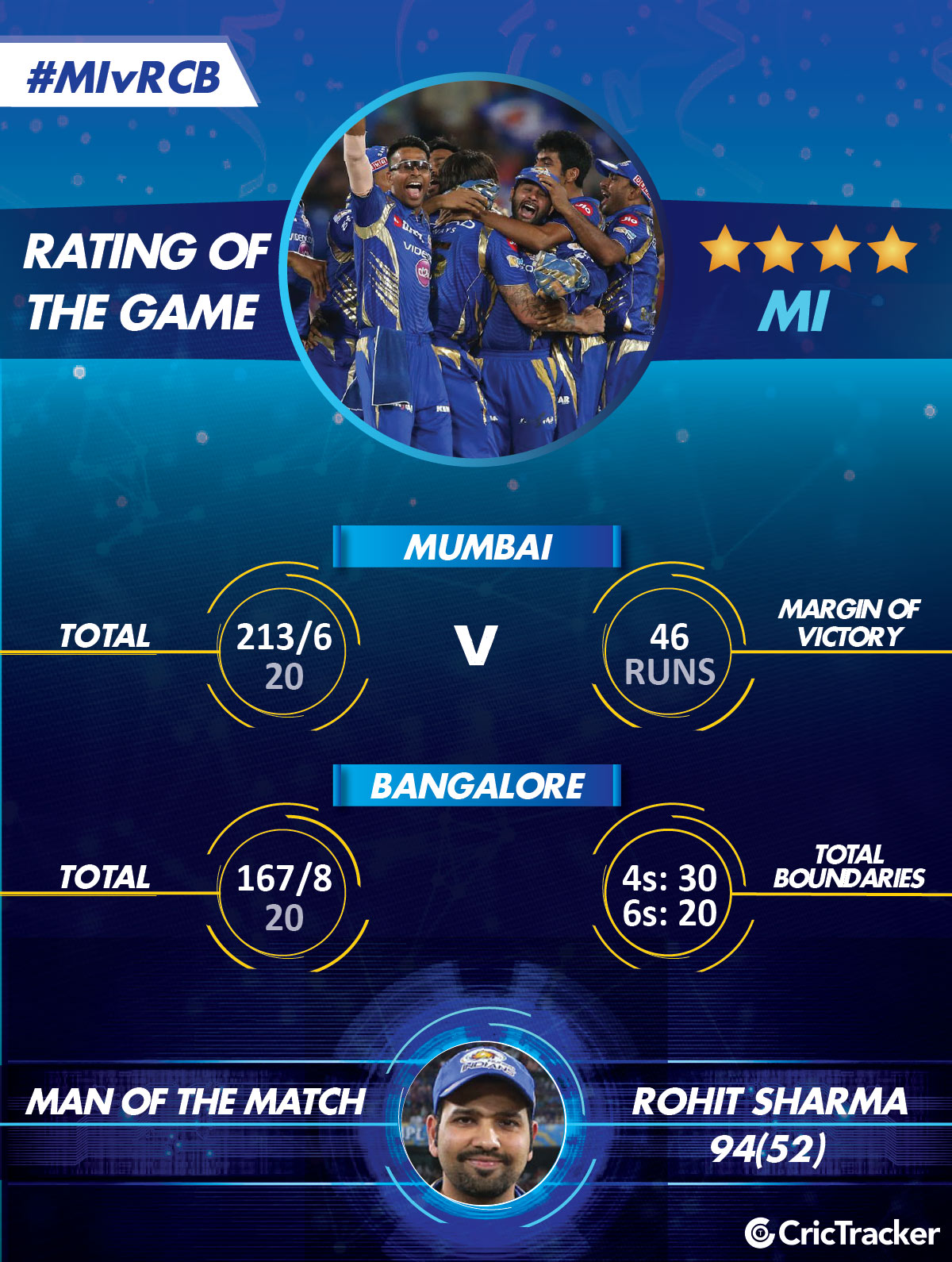