Ajinkya Rahane will be crucial in tackling the threat from the KKR's spinners.

Rajasthan Royals, led by Ajinkya Rahane are off to a good start with two wins in three games despite batting first in all those matches. Their campaign started with a huge defeat against Sunrisers Hyderabad but defeated DD in the rain-affected game to open their points tally. A special inning from Sanju Samson powered Royals to a convincing win in the high-scoring match against RCB where they posted their highest IPL total since 2009. Rahane too gained some momentum with scores of 45 and 36 in winning causes.

The RR skipper scored a 40-ball 45 against Delhi Daredevils but came with a positive intent against RCB in the previous game. He scored 36 in just 20 balls with six fours and a six by attacking the opposition spinners. The Royals will hope their captain will continue the same against the KKR who rely on spinners. The KKR’s spin attack consisting of Sunil Narine, Kuldeep Yadav and Piyush Chawla shared seven wickets in their previous game. The Kolkata Knight Riders are yet to sort out their pace attack as they have played with Mitchell Johnson and Tom Curran in alternative games. 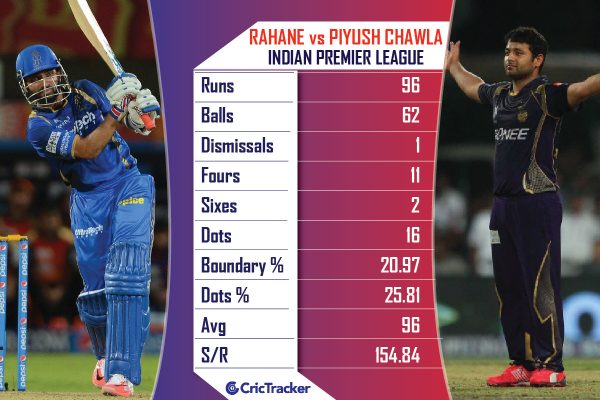 Rahane’s innings against KKR might play a crucial role in his team’s batting success which struggled against leg-spinners in their previous matches. Rahane has often done well against KKR’s leggie Chawla scoring 96 runs in 62 balls in the IPL and got out only once. Ben Stokes faced issues while facing the wrist spinners and Rahane could be the guy who could shield his team-mates’ weaknesses. The 96 runs Rahane against Chawla are the most for him against any bowler in the IPL. 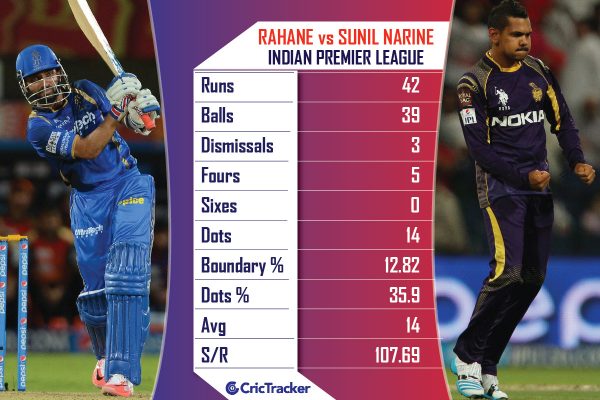 Though Rahane’s record against Chawla could be a positive take away ahead of the game, his record against Sunil Narine is a worrying factor. Rahane scored 42 runs in 39 balls against Narine in the IPL and got dismissed three times. The mystery spinner looked deadly in the previous game and could possess a threat to the Royals at their fortress.