After Chris Gayle’s storm, it was Shane Watson’s turn to score a century in this IPL as the Australian hit one against his former IPL team to help CSK register a huge 64-run win in their new home ground. Watson scored a 57-ball 106 with nine fours and six sixes as CSK posted a 200+ total. Rajasthan Royals lost the plot of their chase in powerplay losing their top three for just 32 runs. Small contributions from the middle and lower order saw them struggle to score 140 before they were bowled out in the 19th over.

Shane Watson‘s role in the game was not only restricted to batting as the all-rounder took a wicket in the two overs he bowled. With his performances in this game, Watson earned a big value of 1.31 crore as per the CricTracker’s player value algorithm. His match value is equivalent to 4.59 times that of his average match salary as the experienced all-rounder was bought for 4 crores by the Chennai Super Kings. The next best value from the game was earned by RR’s all-rounder Ben Stokes. The England player went wicketless but top-scored for his side with a 37-ball 45. 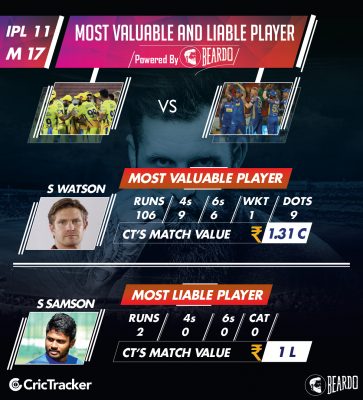 Sanju Samson turned out to be the liable player of the game as his contribution was only two runs in the match. The young keeper-batsman started the season with big scores of 49, 37 and 92* before a couple of low scores. It was Ravindra Jadeja who was their least contributor for CSK in this match as the all-rounder got a chance to bat only one ball and bowl only one over. Suresh Raina returned to the playing XI with impactful performance as he scored 46 in just 29 balls with nine fours that shifted the momentum in the middle overs. 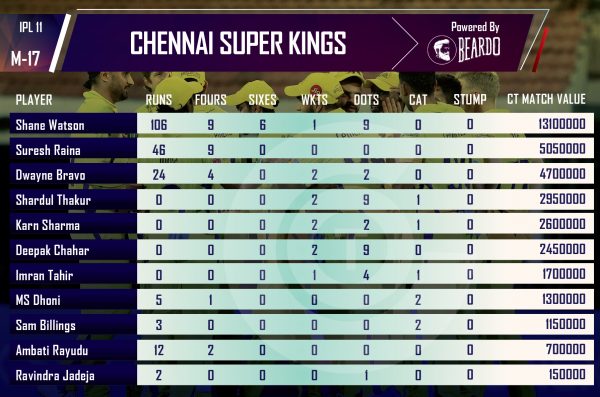 Shreyas Gopal was the best bowler in the game with three wickets in his four overs and conceded only 20 runs. His match performances were valued at 40 lakhs which is twice his auction price of 20 lakhs. His match value is equivalent to 28 times his average match salary for the season. Ben Laughlin too had a decent game with the ball with two wickets and valued 6.3 times his average match salary. 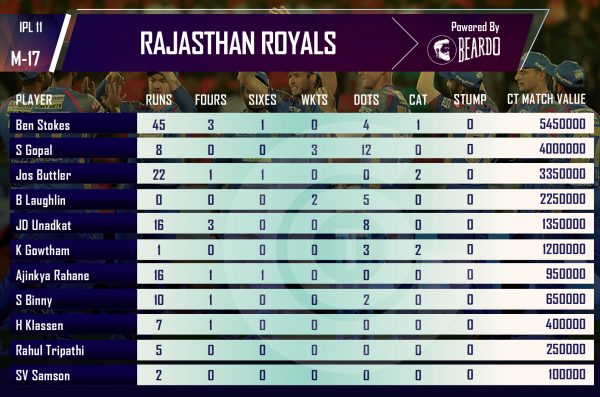