Will Gautam Gambhir tickle with his playing eleven and spring in a few surprises for the important encounter?

The M Chinnaswamy is all set to host the clash between the two bottom placed sides in the ongoing edition of the IPL. The hosts, Royal Challengers Bangalore, will host the Delhi Daredevils in the second game of the upcoming Saturday double header. Coming in to the game, the two sides have had similar run of form. They were thrilled with a win this season, but then lost the plot in the recent games.

Currently, both sides have just one win in the four matches that they have played respectively. Hence, one is for sure – after this game in Bengaluru, one of them will find themselves in a slightly better place than other. The Royal Challengers Bangalore have been collectively failing as a unit with their bowling letting them down big time.

On the other hand, the Delhi Daredevils has managed to find ways to lost out on key moments. The tensions galore for the two skippers – Virat Kohli and Gautam Gambhir. While Kohli does not have too many options to play with, Gambhir has this privilege of trying out some rookies in the squad now. The big question is, will Gautam Gambhir tickle with his playing eleven and spring in a few surprises for the important encounter?

The opening pair for the Delhi Daredevils look pretty set at the moment. Gautam Gambhir has been in a decent form. However, he seems to have lost the track after his fifty in the first game for the team. He needs to get his act back together and set an example from the front for the new-look side.

On the other hand, hard hitting Jason Roy has just come in to the side. He scored a match winning knock against the Mumbai Indians but then failed to get runs on the board in the previous game against the Kolkata Knight Riders. Considering the short boundaries in Bengaluru, Jason Roy should fancy his chances of scoring big yet again.

Despite the fact that the middle-order has been failing for the DD camp, they are unlikely to tinker with their players in the department. Shreyas Iyer got some good time at the crease in the game against Mumbai Indians but has failed to continue the decent show from thereon.

Australian recruit Glenn Maxwell has got starts in most of the games but is due for a big score now. Much like Jason Roy, even Maxwell will back his skills to hit the long shots at the Bengaluru venue. On his day, Maxwell can prove to be the ultimate match winner for the side. In the previous game, he played a very good knock, albeit in a losing cause.

Along with Maxwell, the other DD batsman who had crossed the 40-run mark in the previous game was Rishabh Pant. Pant has done exceedingly well to get starts this season. But he has largely failed to get going. He ends up playing a rash shot to give it away. The team will be hoping for an innings of substance from him now.

In the all-rounder department, the Delhi Daredevils will have a choice between Chris Morris and Dan Christian. In all likelihood, they will stick to the services of Chris Morris again. Morris has not been able to perform significantly in either of the departments of the game. However, his experience could come in handy in Bengaluru.

With Vijay Shankar failing in all the four matches of the season, it will only be surprising if the Delhi camp still persist with his services. There is a very good chance that Gurkeerat Singh Mann could be getting a game in Bengaluru. Mann is handy spinner who can also use the long handle if needed.

The spin department could see a potential change as well. Amit Mishra had played the first match of the season but was left out from the team subsequently. Now, he could be brought back in to the side at the expense of Rahul Tewatia. Tewatia was picked ahead of Mishra for his batting abilities. But he failed to live up to the expectations in the chances that came his way.

The other spinner in the side will be Shahbaz Nadeem. The veteran spinner can play a very big role in the game owing to the skill of bowling in the powerplays. Nadeem has been slightly on the expensive side this season and would be keen on improving his numbers.

Trent Boult has been very successful in his role for the Delhi Daredevils. In the previous game against the Kolkata Knight Riders, he bowled a maiden first up. Later, when Andre Russell was going all guns blazing, it was Boult who dismissed him. He has been one of the few positives for team Delhi thus far.

Boult was partnered with Mohammed Shami in the first four games. But Shami has been largely disappointing with his bowling. Amidst this backdrop, it only makes sense to see either Harshal Patel or Avesh Khan playing in the side at his expense. Harshal Patel is an experienced campaigner who has played a lot of IPL cricket in Bengaluru.

Here’s the DD Predicted XI for the game against RCB 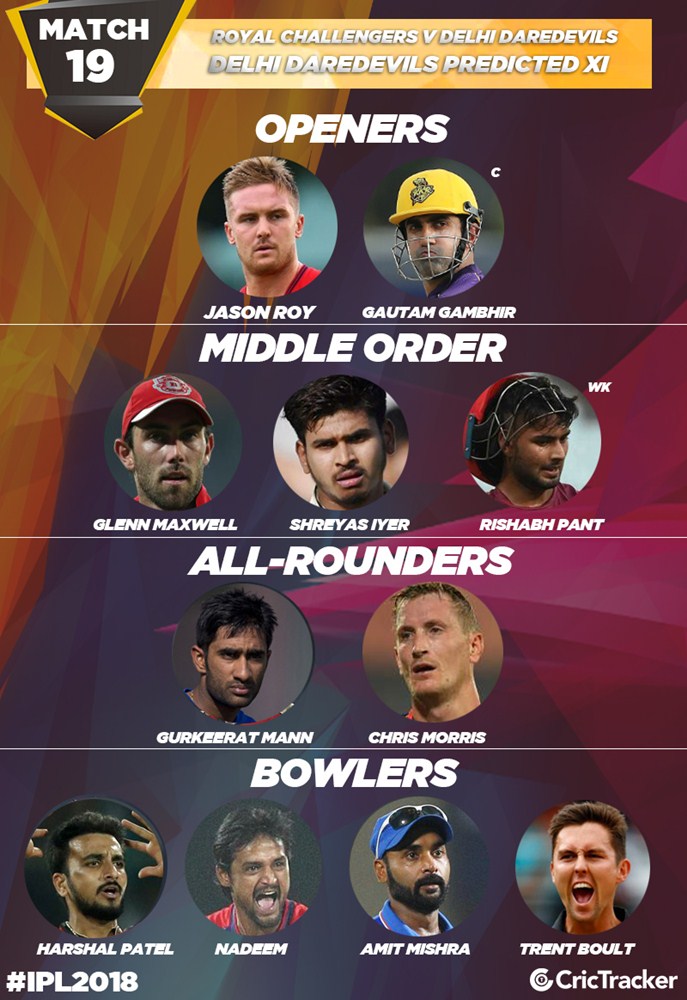