It’s an evenly matched contest on paper between these two teams and should turn out to be a close thriller on the ground.

The Royal Challengers Bangalore and the Delhi Daredevils have been totally below par in this edition of the Indian Premier League (IPL) and are deservedly languishing at the bottom of the points table at the moment, holding the 7th and the 8th positions respectively. While IPL is a long tournament and all is not lost for them yet, they can’t really afford to lose too many games from here as a couple of more losses will mean the sword of elimination starts hanging over their shoulders.

RCB has a 50-50 record at home this season as they have won one and lost one out of the two games they have played at Chinnaswamy and they will want to better that winning percentage going forward. Most of the teams which generally qualify for the IPL playoffs do so by converting their home ground into a fortress and the Men in Red and Black will have to look to do the same as they take on the Delhi Daredevils tomorrow.

The last game at Chinnaswamy between RCB and Rajasthan Royals was a high scoring one, but it, by no means, was a typical Chinnaswamy pitch. It was slow and slightly abrasive, but the standard of bowling from the two sides was so poor that more than 400 runs were scored and the visitors eventually ended up on the winning side.

If it remains a similar kind of pitch tomorrow where the ball holds onto the surface and the bowlers disguise their variations well, we might not see a run-fest. However, with dew likely to play a part later, the par score in the first innings will be somewhere around 170.

Corey Anderson’s selection for the previous game against the Mumbai Indians was extremely surprising considering the fact that the New Zealand all-rounder had not played much cricket of late and was short of match practice and as expected, he couldn’t live up to the expectations. The southpaw was very, very ordinary with the ball and registered a golden duck batting at no. 5. He will probably be left out in favour of his countryman Colin de Grandhomme.

Another change that Virat Kohli will contemplate is swapping Chris Woakes for Tim Southee, but that is a real dilemma for the skipper. Woakes might have been carted around the park, but he has given him a handful of wickets as well and is actually the joint leading wicket-taker in the tourney. However because the Englishman has failed to catch the game by the scruff of the neck with the new ball which is his main job, Virat might want to try another option he has in the squad in the form of Tim Southee who is a pretty experienced bowler as well.

Vijay Shankar has not been able to perform like a genuine all-rounder for Delhi. He has been a real bits and pieces player who has not been properly used with either bat or ball and Gautam Gambhir’s patience with him might have run out. The Tamil Nadu all-rounder might have to hand his spot in the XI to Gurkeerat Singh Mann who is a proper middle order batsman and can bat at no. 6.

Chris Morris was one of the three players retained by Delhi ahead of the auctions, but he has not repaid the faith show in him by the franchise as he has looked totally off colour with both bat and ball and Gambhir might drop him to pick another like-for-like all-rounder Daniel Christian.

Mohammed Shami was smashed brutally by Andre Russell at Eden Gardens the other evening and although he is a very senior bowler, he might have to face the axe too as the young fast bowler Avesh Khan is in line to replace him and make his debut for the visitors tomorrow.

RCB have visible loopholes in their bowling unit as they have nobody to control the game in the second half of the innings. Last game, they made a good start with the new ball courtesy Umesh Yadav but lost the plot as the innings progressed due to the lack of X-factor. They will want better performances from the likes of Mohammed Siraj and Washington Sundar who have been rated highly in the Indian cricketing circles. Also, they will expect Tim Southee to help them get rid of their death bowling issues.

Delhi’s bowling has struggled in the tournament as well, but with Trent Boult and Daniel Christian in there, they have decent death bowling resources. Boult is capable of bowling a good Yorker, while Christian takes the pace off the ball very effectively towards the end, bowling into the pitch using his strong shoulders and generating a loopy bounce to make it tough for the batsman to hit the big shots.

Batting wise, both teams are top heavy and can be put under pressure with early wickets as they lack depth with nobody reliable in the lower middle order to finish the innings properly. It’s an evenly matched contest on paper between these two teams and should turn out to be a close thriller on the ground.

The prediction is for the Delhi Daredevils to beat the Royal Challengers Bangalore in this match. 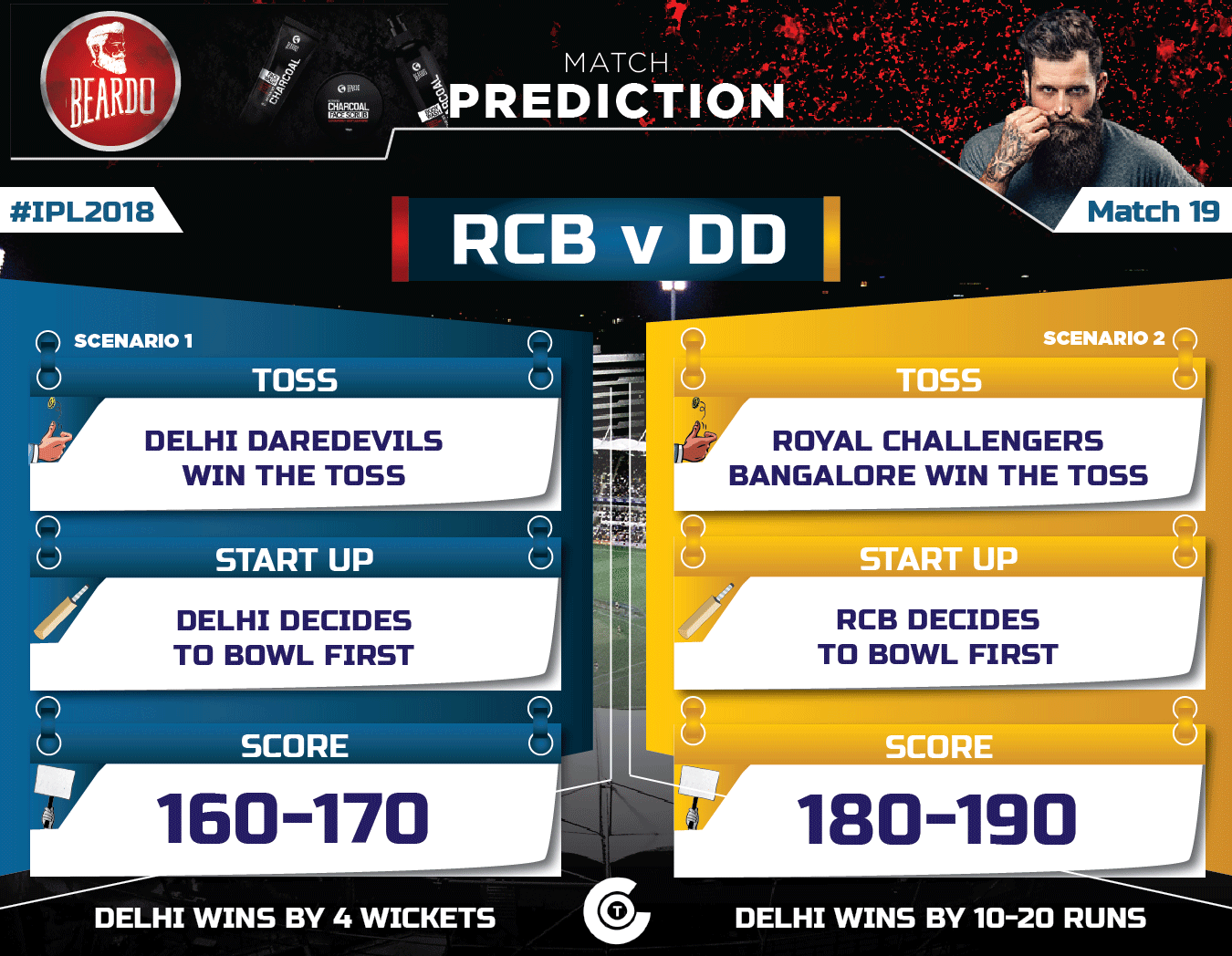