Virender Sehwag and skipper Ravichandran Ashwin will have a lot of thinking to do but they have plenty of brilliant choices to pick from.

After the Auction session for the 2018 season was completed, everyone had an opinion that the Kings XI Punjab got their shopping spot on. They tried for a lot of players, eventually managed to get some decent names on board, including some big ones like Yuvraj Singh, Ravichandran Ashwin, Chris Gayle and KL Rahul.

They look solid across every department and although Virender Sehwag and skipper Ravichandran Ashwin will have a lot of thinking to do, they have plenty of brilliant choices to pick from. No matter which XI they field on the match day, that’ll pose quite a challenge and it’ll be hard for teams to get away easily from them.

Punjab experienced their best season when Glenn Maxwell went bonkers for them back in 2014. After that, they came agonizingly close to qualifying last season but slumped in a must-win game. Ashwin’s first major Test as a captain will come against a very experienced IPL skipper Gautam Gambhir and it’ll be quite a huge Test for the off-spinner from Tamil Nadu.

The uncrowned King of T20 cricket, Chris Gayle will be donning the Punjab jersey for this season. No matter how old he is, only a fool would write him off. The southpaw will have a challenging season ahead as not many are counting on him to do well. With players like Aaron Finch also present in the side, he has to buck up and score big runs.

Mayank Agarwal picks himself in the playing XI and it’ll be a massive surprise if he doesn’t find a spot in the actual game. He has been in Bradman-esque form this season in the Domestic circuit this season and Sehwag will be wary of a fact that he loves being aggressive. Agarwal and Gayle, if they click well, will be the best opening combination by a long distance.

KL Rahul went for a lot of money this season and after a huge bidding war, he finally landed in Punjab. He is highly likely to get an important role in Kings XI Punjab, unlike the way it happened for him in RCB. He will be batting at number three with Karun Nair coming in at 4. Karun Nair has gone silent these days, but he’s quite a talented guy and will come to good effect if he gets decent chances.

A legend of Indian cricket already, Yuvraj Singh has achieved probably everything in his career. He waited 9 seasons to win an IPL trophy and he eventually did it with the Sunrisers Hyderabad. This season will be a test of his temperament and ability and will serve as an exam ahead of the World Cup. Punjab’s very loyal cricketer David Miller is again back in the team and will be playing the important role of a finisher.

As it stands, Axar Patel might be the only all-rounder to feature in the XI and considering Ashwin’s batting prowess, he too qualifies as an all-rounder. But Axar will be the one people would have more expectations on to perform equally well with the bat and ball. He was the only retained player in the KXIP franchise before the auction and he has to live up to the trust placed by his management.

Ravichandran Ashwin will now be hogging more spotlight than he ever did in an IPL season. For the first time in his career, he will lead an IPL franchise and it was a smart move considering Ashwin is quite a tactician. With all the experience he has under his belt, Ashwin is expected to lead this side quite gracefully.

The Afghan sensation Mujeen Zadran might be getting a place in the playing XI straight away. This means he might become the third Afghan cricketer to take the field in an IPL game after Rashid Khan and Mohammad Nabi. Mohit Sharma has been a great servant to IPL franchises in the past and with his subtle variations, he will be crucial in the death overs.

Andre Tye went for a lot of money as his demand had gone up drastically post his exploits in the Big Bash and for the Australian National side. Tailor-made for T20 cricket, Tye will be a perfect addition to the Punjab bowling contingent. He also picked up a hat-trick last year playing for the Gujarat Lions and will be keen to scalp a good number this season.

Here’s KXIP predicted XI for the match against DD 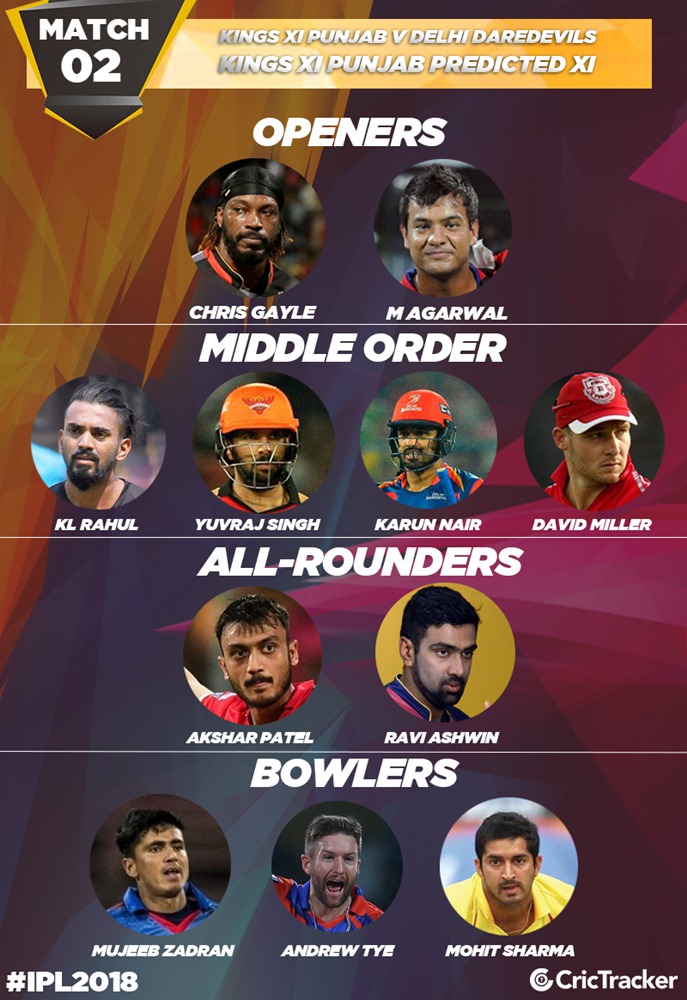 Catch more developments on this and top leading ‘cricket news‘ on CricTracker.