Dhoni and his men have a tough task on their hands of conquering Hyderabad.

Chennai Super Kings (CSK) thumped Rajasthan Royals (RR) in their den away from the den at MCA International Stadium in Pune on Friday. It was a complete performance from the team as the batsmen proved that they can post a total after batting first and the bowlers showed that they are capable of defending it. Interestingly, the new-ball bowlers came to the party for the first time and provided them with the early breakthroughs. However, CSK will have to get past one of the best bowling attacks this season in Hyderabad now which will be a challenge for them.

Sunrisers Hyderabad (SRH) have lost only one game so far and they were pummelled by Chris Gayle in the last game. They would be itching to make a comeback and must be delighted to be back at home. CSK though are on a roll and the momentum is with them after a dazzling performance last night. They will have to handle the clever bowlers of the opposition and keep them outguessing every now and then.

Here we bring you the predicted XI of Chennai Super Kings for this game:

Shane Watson is in the form of his life and with the century against Royals, he has arrived at the tournament properly now. Though it would be interesting to see if he can replicate the similar performance against SRH as their bowlers are much more equipped. Also, it is crucial for CSK that the openers should continue providing them with quick-fire starts and stranglehold the opposition up front.

Ambati Rayudu must have felt better after returning to his favoured position and would love opening the innings throughout the season. He has been faring very well at the top and his brief knock in the powerplay has helped the team a lot. It is an impressive move from the Men in Yellow as they have made the best use of him by promoting the usually middle-order batsman. Rayudu will feel that he needs to get past the 50-run mark soon given the form he is in.

Suresh Raina returned to the side fully fit one match earlier than anticipated and it changed the way CSK batted against Royals. He is nearing his best now and the trailblazing knock of 46 runs showed the glimpse of the same. He played his shots fearlessly but unfortunately got out playing his trademark stroke and once that comes back, one should believe the vintage Raina has arrived at the T20 extravaganza to entertain his fans. The Chinna Thala of CSK soon will play a big knock surely.

MS Dhoni is looking to change his game interestingly by coming in to bat at 4. His attempt to tee off from the word go failed in the last match but he would love to bat at the same position as it gives him time to settle. Once the master gets his eye in, everybody knows how dangerous he is. Though with the likes of Rashid Khan and Shakib Al Hasan in the opposition he might need more time to settle given his struggles against leggies and the left-arm spinners.

Sam Billings has failed badly after playing a match-winning knock in his debut game in the yellow jersey. He will have to play a significant innings soon to keep his place in the side. Also, his ability to manoeuvre the ball might prompt him to come ahead of Dhoni in the line-up which might be decided according to the situation. Though he needs to score and prove that the innings which he played two games ago was not a fluke.

Dwayne Bravo looked a bit jaded in the last game and it was natural as he didn’t bat much after the sizzling outing in the tournament opener. It is important the team management keeps him in the plans with his batting and keep him in his groove. There is no doubt whatsoever with his bowling abilities as he is the master of the death bowling.

Ravindra Jadeja’s role in the team surely is being questioned now with him not bowling much. Dhoni is keen on using him as a batsman but he is not getting many balls to play down the order and has not impressed much whenever he has been promoted. Soon he needs to prove his worth in the team filled with immense else will have to make way for a proper bowler.

Karn Sharma played his first game for the franchise against Royals and helped them in cleaning up the tail when the outcome of the game wasn’t much surprising. He will have to play a better role in the upcoming and he should be ready for the same as he will be tested. Deepak Chahar was at his best the other night and bowled his 4 overs with the new ball itself. His wicket-taking abilities came to the fore and he looked at ease. Dhoni also used him upfront cleverly which got the best out of the youngster.

Shardul Thakur also impressed many with the way he bowled. He also took a superb catch off his own bowling even foxing the batsman with a surprise quicker delivery. His bowl to castle Heinrich Klaasen was the best and it clocked more than 140 kph. Imran Tahir looks like a trump card for the Men in Yellow as they are giving him confidence by playing every game. He might be crucial for them going deep into the tournament and his experience will surely reap rich rewards. 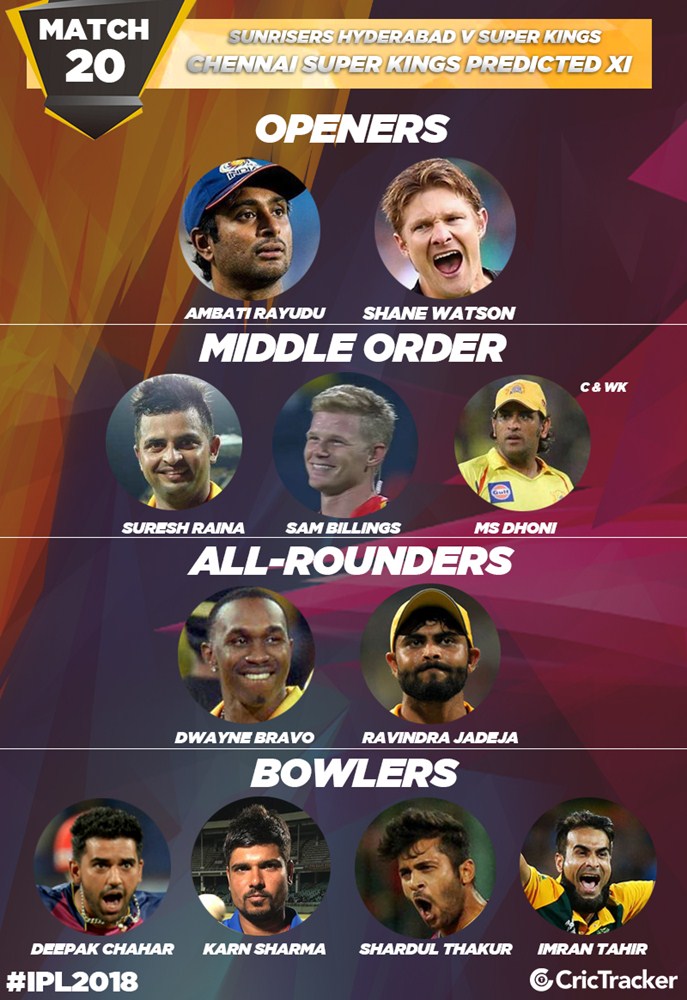