It is expected to be an easier game for Kings XI Punjab.

Delhi Daredevils have had a forgettable first 5 matches in this year’s Indian Premier League (IPL). Barring the one against Mumbai where they successfully chased down a target of 190 odd, there isn’t any other match they can take too many positives from and considering the level of their performances so far, it’s not a surprise that they are holding the last spot in the points table.

However, a notable fact out of Delhi’s campaign is that they haven’t played even a single match at home till this stage and have been consistently on the road since the outset of IPL 11. Generally, the teams feel more comfortable playing at home with the crowd support and the familiar pitch and Delhi will also be hoping it works to their advantage as they start their home run tomorrow against the Kings XI Punjab.

Delhi had actually opened their campaign facing Punjab in Mohali and was comprehensively beaten by 6 wickets in that match. They would definitely have it in their mind and they will be determined to return the favour to their North Indian rivals.

The wicket at Feroz Shah Kotla traditionally happens to be low and slow, but there have been occasions in the previous editions of IPL when they have dished out belters there and whenever that has been the case, it has resulted in run fests as the ground is too small for the muscular power hitters who can clear it even with mishits.

It will be interesting to see what kind of surface they have on offer for this game, if it’s the traditional Kotla where the wicket lacks pace and stroke-play is difficult or a road where 400 runs are in store. Whatever the nature of the wicket might be, one thing is for sure that batting second will be a better prospect as dew will certainly make its presence in Delhi and the batsmen will have it easier and easier as the evening goes deep.

Chris Morris has been in no rhythm with the ball at all this tourney and he is not doing enough with the bat either to justify his spot in the XI. Dan Christian, on current form, is probably a more useful option for Delhi and that’s one of the changes they will surely be contemplating for tomorrow’s game. Christian is very good bowling his cutters into the pitch towards the latter stages of the innings when the ball gets a little softer and can be effective in the death overs.

Harshal Patel replaced Mohammed Shami at Chinnaswamy last night and although he got the wicket of Virat Kohli courtesy that freak catch of Trent Boult at the square leg boundary, his overall performance was extremely average to say the least. The 27-year old might have to make way for the young fast bowler Avesh Khan who is much quicker in comparison and can make an ideal combo with Trent Boult upfront with the new ball.

Kings XI Punjab picked Ankit Rajpoot ahead of Mohit Sharma for the KKR game as the new pitch at Eden Gardens is slightly quicker in comparison to all the other Indian pitches and is ideally suited for bowlers who hit the deck hard. Since Ankit fit that bill, he got his opportunity, however, he failed to make a mark as he went for more than 10 runs per over in the three overs he bowled and is likely to have to hand over his spot back to Mohit.

Barinder Sran was also very expensive against Kolkata, but the alternative option available for him is Axar Patel and given the dimensions of the Kotla ground, Ravichandran Ashwin will be very reluctant to go with three spinners. Also Sran swinging it back into the right handers with the new nut is always a wicket-taking option. So he should be having another crack.

Punjab, especially with the inclusion of Chris Gayle and the form that he has shown, is an explosive batting side. KL Rahul is batting as well as he has ever done and so is Mayank Agarwal at no. 3. The middle order is probably a bit of a concern with Yuvraj Singh out of nick and Aaron Finch also short on confidence not having started the tournament with decent scores, but this is still one of the strongest batting units in the tourney overall.

Delhi will be hoping for the opening duo of Gautam Gambhir and Jason Roy to fire and build the platform for the middle order to launch. Rishabh Pant and Shreyas Iyer played breathtakingly well last game, but there was so much work left to be done for them due to the top order failure that they still couldn’t guide Delhi to a match winning score. The hosts will dearly need a good, solid start.

Bowling wise, Punjab is much stronger with two magnificent T20 bowlers in their ranks in Mujeeb Zadran and Andrew Tye. Delhi also has a couple of decent spinners who can be really handy in slow conditions, but they haven’t bowled in the right areas so far. If the surface assists Shahbaz Nadeem and Rahul Tewatia at home, they will have to step up to the plate and deliver for their captain.

The prediction is for the Kings XI Punjab to beat the Delhi Daredevils in this match. 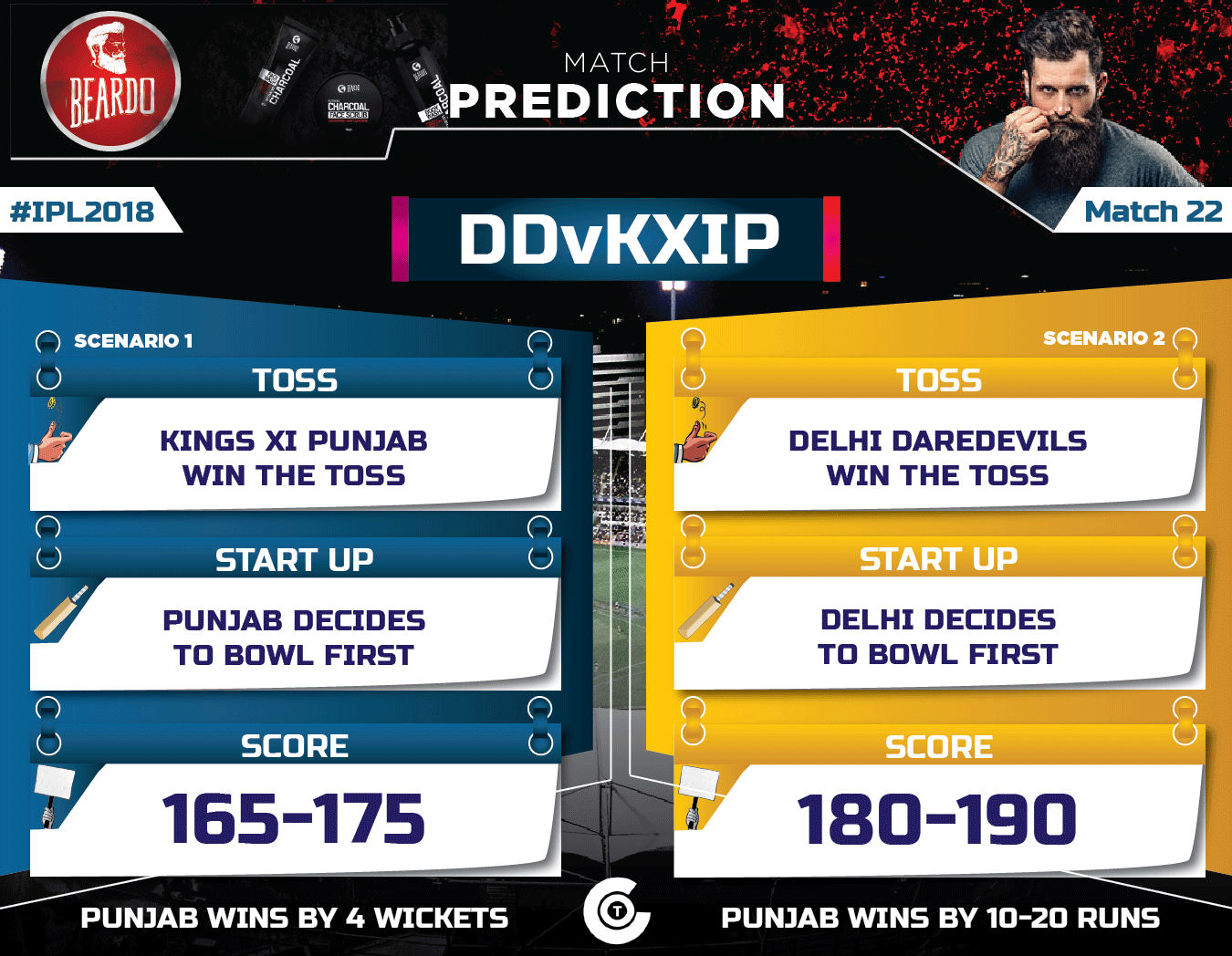