Dhoni was the match-winner alongside Ambati Rayudu once again.

MS Dhoni is the best finisher in the world!! How many times have we heard this sentence? The commentators said almost thousand times on air today. Yes, Ambati Rayudu played a match-winning innings well but it was Dhoni once again who did it again. There is no doubt about his abilities whatsoever. But Royal Challengers Bangalore (RCB) were once again left wanting in the death overs. However, one has to feel for AB de Villiers who played amazingly well but it was Chennai Super Kings (CSK) who prevailed in yet another thriller.

When this man starts smacking the ball, it doesn’t matter which team you are supporting. You just want to sit and enjoy the masterclass on show. That is what happened at the Chinnaswamy Stadium on Wednesday as AB de Villiers went berserk from the word go and even the best captain in the house had to scratch his head. He smashed as many as 8 maximums and a couple of fours which is normally vice versa. But nothing is impossible for Mr 360 as he put on an exhibition of some stunning shots in the evening.

He also became the proud owner of the Orange cap during his knock and admitted that he was feeling a bit dodgy at the start. Once he found his groove, there was no stopping him as he also smacked Imran Tahir out of the park in the 11th over. The bowler flighted the ball but is too full as the Superman got under it and just swept it in the air with his heads down not caring where the ball is. The monster hit went out of the Stadium over deep mid-wicket and eventually topped the list of the longest six (111 m) of the season so far.

The assault had just begun as next bowler to come under his radar was Shardul Thakur who just kept on bowling the knuckle balls. The first three deliveries of the 13th over went for the maximum as De Villiers got better of him everytime picking his harmless slower balls. While the first couple of them went over deep mid-wicket and long-on, the third monster was whacked over long-off. It was just smooth sailing for him on the day and some clever bowling from Tahir dismissed but he had set the platform for the other batsmen until then.

Ambati Rayudu has been enjoying his stint with CSK definitely as the promotion at the top of the order is working wonders for him. He has suddenly hit the purple patch this season. His team needed some one to stay in the middle and play a huge knock to gun down yet another 200+ score and this man put his hands up again. It was such a classy knock from him as he unfurled all the shots on the evening to bring his side back in the game stunningly.

The ball kept on travelling the distance as the small man played the good bowlers cleverly and smothered the poor death bowling of RCB. Unfortunately, he got run out once again to end his wonderful knock of 82 runs off 53 balls during which he whacked 3 fours and 8 huge maximums. It was a praiseworthy outing for him but his captain took care that his master class wasn’t wasted.

THE BEST FINISHER IN THE WORLD!!!! That’s the only sentence for this legend. You just can’t ignore this man. He is not done yet in his career. Watch out for the vintage Dhoni in the international cricket as well now. 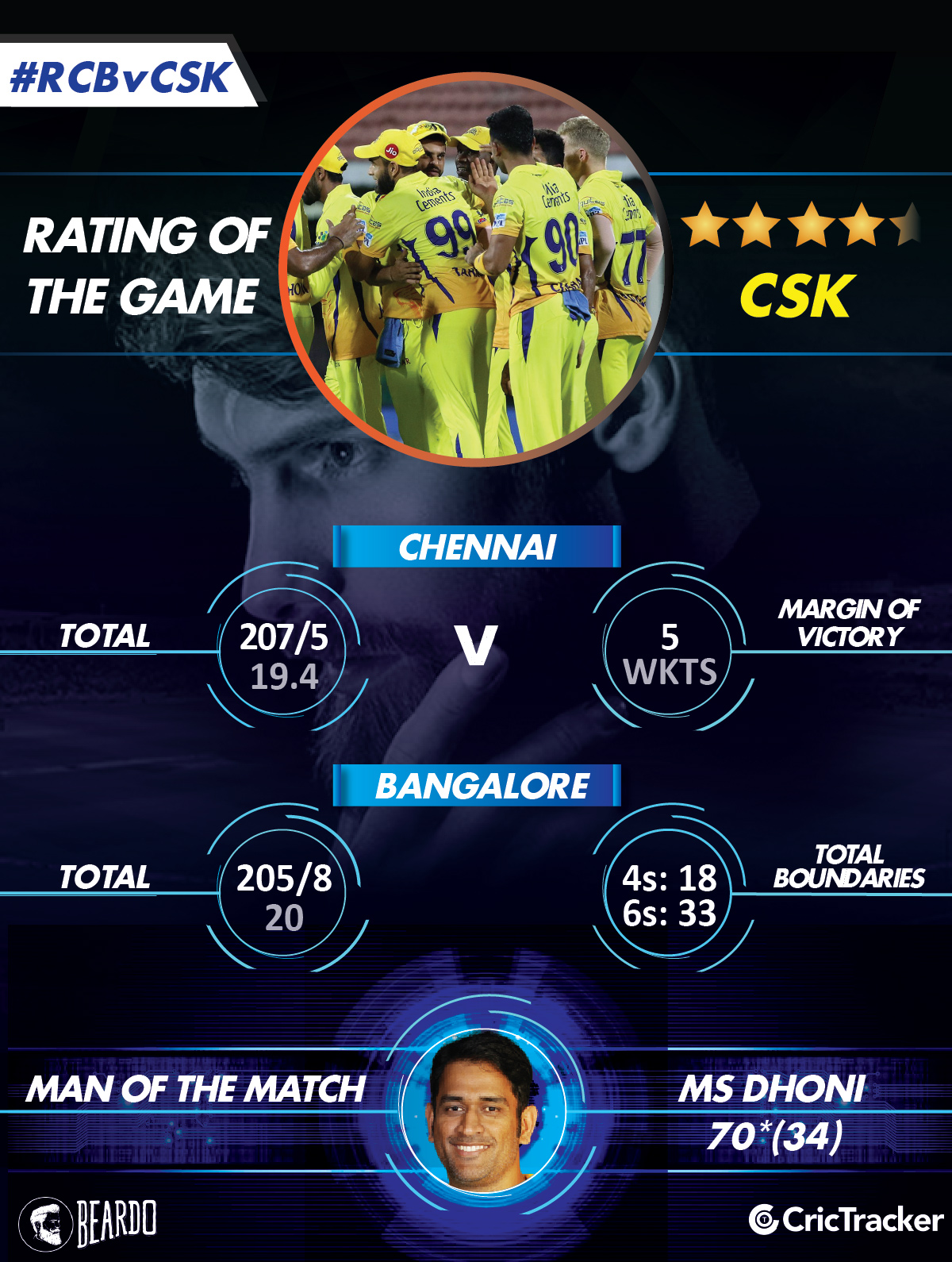