The tournament was a witness to yet another low-scoring thriller.

A week ago, Chris Gayle tormented the Sunrisers Hyderabad (SRH) into submission. Ravichandran Ashwin didn’t risk him against an erratic Delhi Daredevils (DD), bearing in mind the likelihood of the Jamaican to suffer a burnout and also because their next opponent was Hyderabad, this time at the Rajiv Gandhi International Stadium, the backyard of the Sunrisers.

The Orange Army were never going to be an easy proposition which was learned by the Mumbai Indians (MI) a couple of days ago. The comforting factor for the visitors was that only their batters have been able to get the measure of the Sunrisers, who are touted to possess the most penetrative bowling attack. Ashwin had confidence in their batsmen so he elected to field first.

It was a win-win situation as the Sunrisers seemed like having the repertoire to put a lid on the  Punjab batsmen on a batting-friendly wicket, from how things have panned out thus far. However, prior to that, the spotlight was on the Sunrisers batters against the Kings bowlers. The pitch didn’t spew venom, fast bowler Ankit Rajpoot definitely did and how.

The crowd has shelled out thousands of bucks to watch Shikhar Dhawan wield magic, Kane Williamson exhibit grace and the likes of Yusuf Pathan to unleash muscular power. What happened next was beyond the imagination of the hosts. What panned out was also triggered by the Hara-kiri, which the Sunrisers imposed on themselves.

Rajpoot bamboozled the skipper with a delivery which bounced a wee bit that the Kiwi expected. As a result, the opener presented the simplest of catches to Ashwin inside the circle on the off-side. In the second ball of the third over, the extra bounce by Rajpoot accounted for yet another batsman, this time it was a batsman of the stature of Shikhar Dhawan.

In a space of 14 balls, the heart of the SRH batting was uprooted, leaving them in shambles. Rajpoot didn’t stop there and outdrew a hapless looking Wriddhiman Saha. Punjab got a breather when he wasn’t operating in the middle overs, thanks to the limit of four overs. Nevertheless, he returned in the final over and pinned Mohammad Nabi and Manish Pandey. Not what the flock expected to witness.

What’s there beyond Gayle and Rahul?

KL Rahul and Chris Gayle have unfolded utter mayhem and have decimated anyone and everyone who stumbled onto their path. It’s always a delight watching the openers bludgeon away, but there’s a flip side to it. The ecstasy of their exhibition, unknowingly, but steadfastly diverted their focus from their chinks in their batting arm-their middle order.

When Rahul and Gayle were carving the bloodshed of runs, the Sunrisers vulnerably looked to the heavens for a solution. Rashid Khan is a special talent and he churned out a special delivery which shattered Rahul’s defence and cannoned into the timber. Gayle was beaten for pace, his right hand came off his handle and the ball traced into the hands of Basil Thampi, who erupted in jubilation.

A couple of wickets and the skids were well and truly under the visitors. It wasn’t supposed to with 76 runs required of 70 balls with eight wickets in hand and with the likes of Aaron Finch, Mayank Agarwal and Manoj Tiwary who are no mugs with the willow. However, they capitulated like nine pins and succumbed to the wrath of some vicious bowling by the Sunrisers. 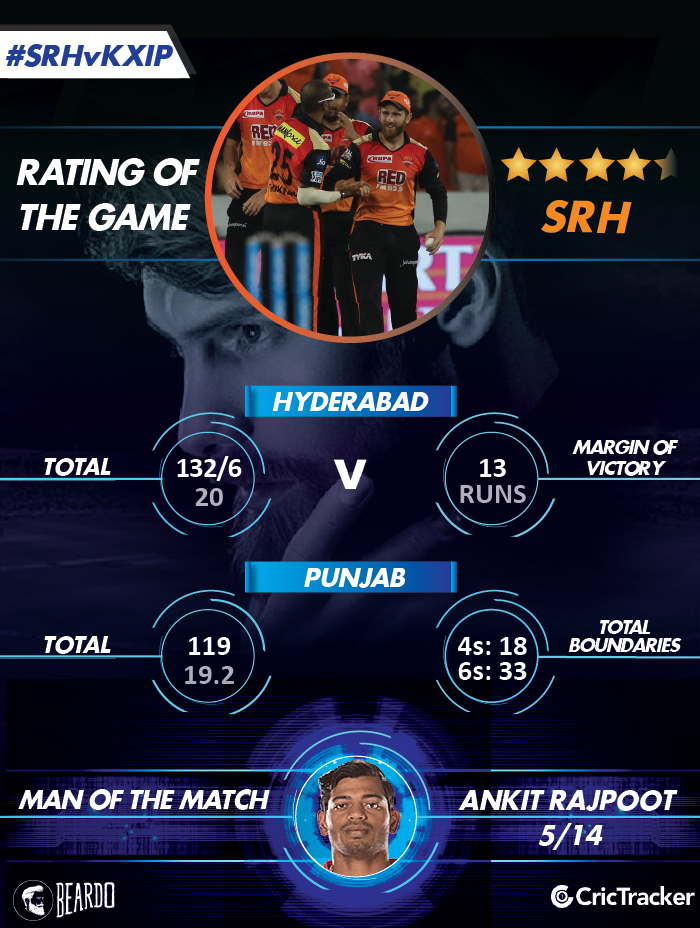