The Kolkata Knight Riders (KKR) have strained with their playing combination, which isn’t a surprise bearing in mind their form in the recent times. They also have limited resources in their bench, which is definitely not a good news for Dinesh Karthik’s men. They have recently suffered a massive defeat against the Delhi Daredevils (DD), which would have dashed them psychologically.

Both their batting and bowling has floundered against them, which is a worrying concern for Kolkata. They can’t afford mishap as there is cut-throat competition for the top four positions for the playoffs. While the Knights contemplate over the chinks in their armour, we take you through their probable playing eleven against the Royal Challengers Bangalore at the M.Chinnaswamy Stadium.

Chris Lynn and Sunil Narine are likely to stay as the openers. Chris Lynn, barring a couple of games here and there has looked out of sorts and has looked a pale shadow of his stupendous self. He played a couple of knocks against the Sunrisers Hyderabad (SRH) and the Kings XI Punjab (KXIP), but apart from those, he has been awful.

Sunil Narine, on the contrary, has been impressive at the top of the order. He has got a half-century in the opening game and has played a few quick-fire cameos for them, which have given blistering starts to the Knights. Both Narine and Lynn would be extremely crucial for KK if they are to turn over the might of the Challengers in their own backyard.

The middle order has been a tad inconsistent in their erstwhile games. Robin Uthappa started in an awry manner, but has played a couple of breezy knocks, which have led the platform for a final launch. Nitish Rana hasn’t quite flourished in the last couple of games, which might be a worrying factor for the franchise. Dinesh Karthik has also struggled in the tournament.

His captaincy has also come under the scanner as few of his decisions have also been a recipient of severe criticisms. Shubman Gill has been batting in the middle order and it was only against the Delhi Daredevils that he got an opportunity to bat and he didn’t disappoint. These four batsmen will be crucial to how KKR perform in their next game.

Andre Russell has been a silver lining in the dark clouds of KKRs topsy-turvy run thus far. He has been outstanding with the willow and has been able to clear the roped without much fuss. He has also been cranking up a decent amount of pace with the leather. Russell’s role would be extremely crucial for the Knights to turn over Virat Kohli’s men.

The bowlers have an erratic run as well having leaked runs, sometimes at a haemorrhaging rate. The foreign contingent of their bowling in Mitchell Johnson, Andre Russell and Sunil Narine have to churn out the channels to get RCB by the scruff of their necks. They were torn apart in their erstwhile game and would want to make amends, which won’t be easy by any means.

Kuldeep Yadav hasn’t quite been at his very best and his form would be important for KKR to tackle the batting of the Challengers. Shivam Mavi was taken for runs by Shreyas Iyer and it would be interesting to see his approach in the next contest. 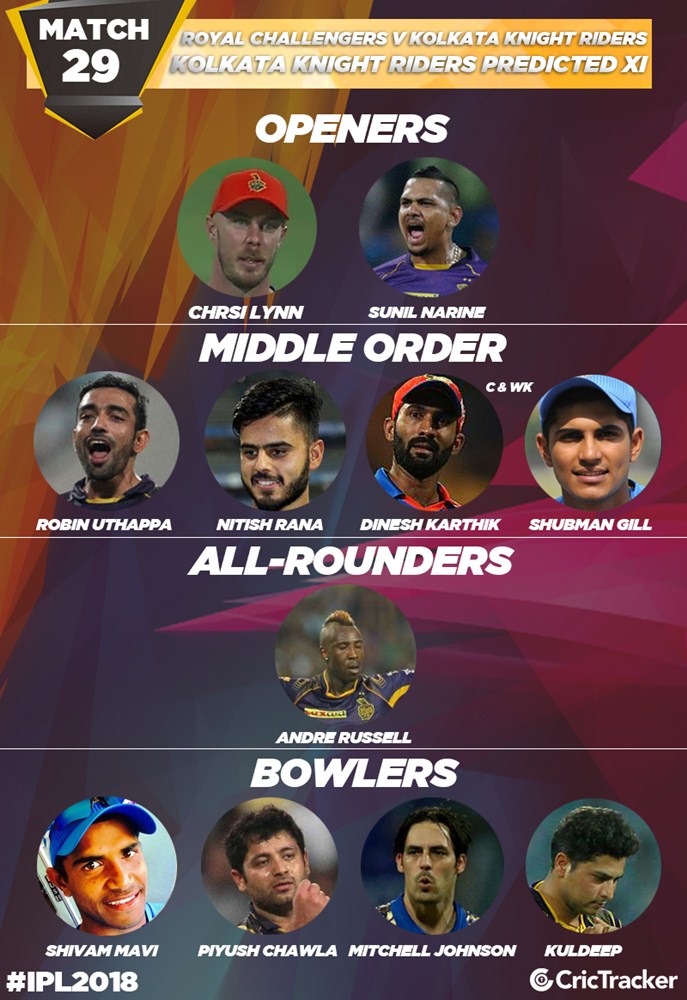