The Delhi Daredevils’ IPL 2018 campaign woke up after a thumping win with over the Kolkata Knight Riders which came under their new captain Shreyas Iyer. The initial captain Gautam Gambhir decided to step down and bench himself after the Daredevils lost five of their first six matches. Their batting came to the party in the previous match posting their 2nd highest IPL total ever. Delhi’s bowling got better over the last two matches with the inclusion of Avesh Khan and Liam Plunkett.

Chennai Super Kings, with five wins in their seven matches, will take on the Daredevils with an exactly opposite record in the tournament so far. However, CSK have lost their previous game against Mumbai and also set to miss out their opening bowler Deepak Chahar for the next couple of weeks. This will be Delhi’s best chance to beat a team in the top half of the table and gain some momentum. DD will need their bowlers to strike early as CSK’s strength lies in their batting.

The most talking point of  Delhi Daredevils’ batting order is Glenn Maxwell’s form. The Australian stepped to India scoring runs in the domestic circuit but failed to get going in the tournament. He found himself opening in a rain-affected game chasing 73 in six overs and fell to leg spinners and left-arm spinners in a couple of matches. He looked set towards a big knock in Eden Garden before he holed out to the deep fielder. Glenn Maxwell might have scored 27 runs in the last match but did fail to get his timing right. 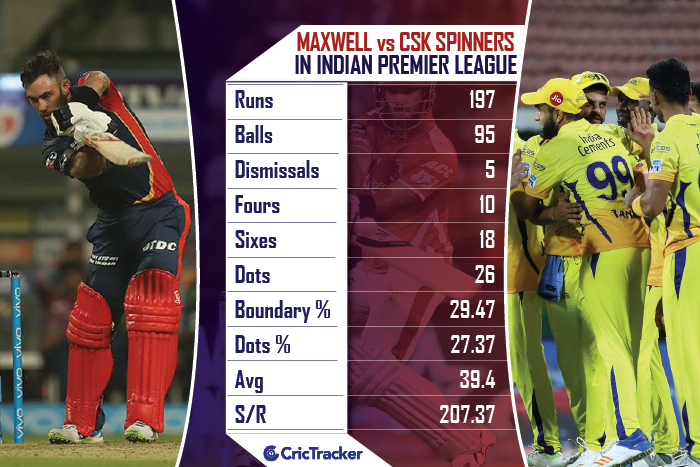 Super Kings will be a perfect target for Maxwell to clear his due in the tournament. The all-rounder scored 204 runs in four IPL innings against them at a strike-rate of over 200 including two 90+ knocks. Though the CSK’s bowling attack took a revamp, the current attack contains a set of bowlers whom Maxwell took for cleaners in the IPL. He scored at a strike-rate of over 200 against the likes of Harbhajan Singh, Imran Tahir and Karn Sharma but interestingly struggled against Ravindra Jadeja who didn’t bowl much in the tournament. 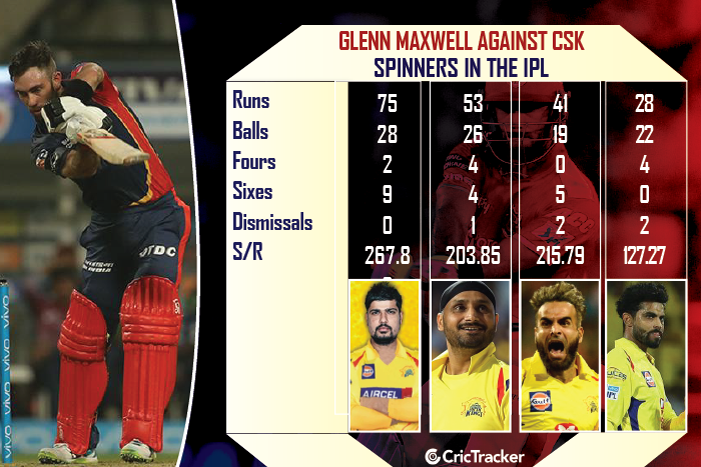