Mumbai Indians have beaten RCB in their erstwhile encounter.

The Royal Challengers Bangalore’s (RCB) campaign in the eleventh edition of the Indian Premier League (IPL) has gone downhill with every passing game. Having won only a couple matches in seven attempts, the Virat Kohli-led side is currently in tatters. To make things worse, they have floundered in their last two home matches at the M.Chinnaswamy Stadium as well.

They made as many as three changes in the game in a bid to turn their fortunes, but somehow they haven’t been able to perform. RCB are currently staring down the barrel and are required to win almost all their games in order to stay in contention for a berth in the top four. Here is the predicted eleven of the franchise in their upcoming game against Mumbai.

Brendon McCullum and Quinton de Kock are likely to open the batting. McCullum came in place of AB de Villiers and played a useful knock at the top of the order. de Villiers suffered a viral infection prior to the game which prompted McCullum’s entry. Baz commenced the tournament with a useful knock against Kolkata Knight Riders and failed in a couple of games, which led to his omission from the team.

Quinton de Kock has been persisted with from the opening game and he hasn’t let his team down by any means. He hasn’t had many substantial scores under his belt, but has ensured the RCB doesn’t lose early wickets and gets his team off to a steady start. Both McCullum and de Kock will again be expected to fire in the upcoming game at the Wankhede.

Virat Kohli will clearly have the responsibility to shoulder the middle order as he has done on so many occasions. He played brilliantly against the Knights, but there wasn’t any semblance of support for him from the other end. He came after the fall of the first wickets and played till the very end, which also ensured that RCB post a respectable score.

Mandeep Singh’s contributions have been effective in the middle order. After Virat Kohli, he has been the most reliable as far as batting in the middle is concerned. He has been one of the primary reasons why the Challengers have got up to respectable totals on several times. Manan Vohra has done nothing of substance but has the capability to score runs quickly.

Colin de Grandhomme hasn’t had much to do in the game he has played. He mostly takes charge in the lower middle order where he is required to get on with things from the outset. He has found the boundaries and also perished in the quest of scoring runs at a brisk rate. He hasn’t bowled either. However, bearing in mind the New Zealand cricketer’s abilities, he might be included again.

The bowling has been a major concern for the Challengers throughout the seven games. Nevertheless, Murugan Ashwin, who was roped in, churned out an impressive spell against on a wicket, which hasn’t been helpful for the bowlers. Tim Southee, who replaced  Anderson, has impressed as well. Though he couldn’t muster a wicket, he was effective enough to not let the batsmen run away with the game.

Umesh Yadav has been phenomenal with the leather having picked up quite a few wickets. He was expensive against KKR and would wish to turn things around against Rohit Sharma’s men. Yuzvendra Chahal’s leg-breaks have also been effective. Against an aggressive Mumbai attack, the bowlers would again be in for a stern test.

Here’s RCB Predicted XI for the game against MI 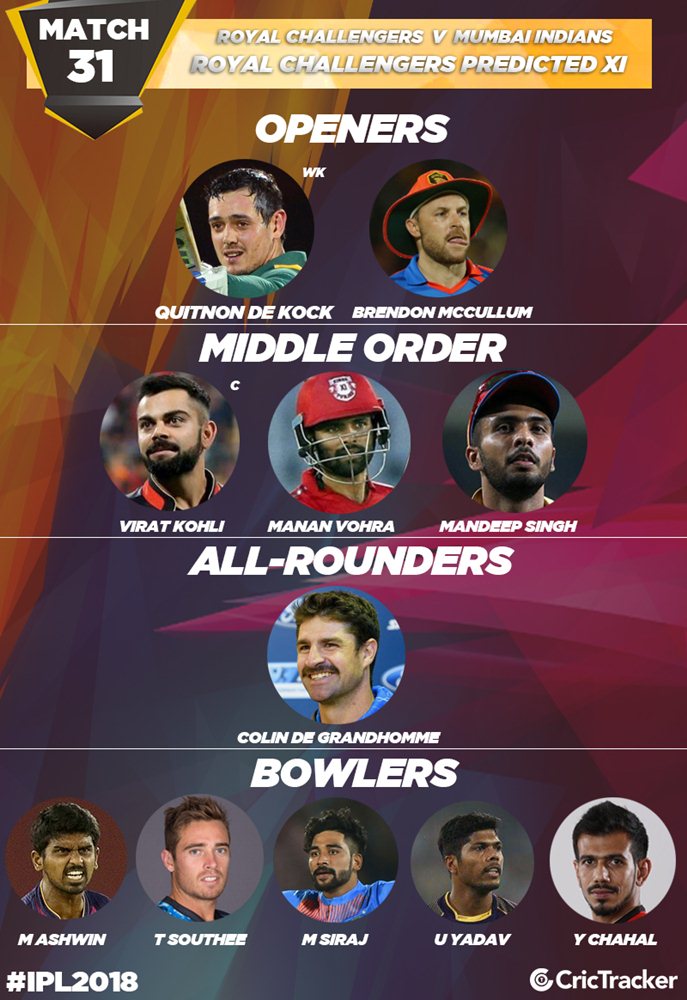