Both teams have got some outstanding talent at their disposal, but Rajasthan relatively is a tad more balanced considering the fact that they have got a world-class death bowler and a world-class spinner, something Delhi lacks.

The Delhi Daredevils, with the last night’s defeat at the hands of Chennai Super Kings, have now been pushed on the verge of elimination from IPL 11. They are in a must-win situation in each and every game they play from here on in the tournament. Their opponent the Rajasthan Royals are not quite in the same situation, but they also need to stitch together a few victories at this stage to enhance their chances of finishing in the top 4.

The last meeting between these two sides had not ended the way Delhi would have liked to. They were able to restrict Rajasthan at a chaseable total on a flat pitch, but with rain arriving at the mid-break and persisting for a long period, the DLS method came into play and the revised target turned out to be a little too tough for them. It was a bitter pill to swallow and they will want to avenge it as they take on Rajasthan again tomorrow.

The Feroz Shah Kotla pitch this season has behaved differently on different days. Out of the couple of matches that have been held there, one has been really slow, while the other one was a belter. It’s really hard to predict what they have in store for this game. But there are more chances of the deck being flat and true rather than sluggish as the home team had a positive result on a flat surface the other evening against KKR.

Although Liam Plunkett was taken apart by Shane Watson last game, Delhi won’t drop him just yet considering he is their enforcer with the ball. He is tall and strong with broad shoulders and can make things happen for his captain even on good batting wickets. He whacks the deck and extracts nagging bounce which not all the batters particularly like.

Rahul Tewatia’s bowling also has been pretty ordinary the last couple of games, but he holds an edge over Shahbaz Nadeem because of his batting. With him at 7 and Plunkett at 8, Delhi gets their lower order batting covered as both of them can give the ball a fair bit of tap. If Tewatia is replaced by Nadeem, Plunkett will have to bat 7 which will, therefore, elongate the tail and that’s a call Delhi won’t make.

Rahul Tripathi has been slotted at his preferred batting position which is at the top of the order, but he has let himself down with his poor shot selection of late. While he is not in danger of losing his spot in the XI, he will have to make the opportunities count and he will be keen to make a significant impact.

The Rajasthan teenager Mahipal Lomror was handed his IPL debut against the Sunrisers Hyderabad and while he couldn’t make it a memorable one for himself, leaving him out after just one game will be really harsh on the youngster. He should feature in the XI again tomorrow and will bat in the lower middle order, most likely at no. 6.

Both teams have got some outstanding talent at their disposal, but Rajasthan relatively is a tad more balanced considering the fact that they have got a world-class death bowler and a world-class spinner, something Delhi lacks.

The hosts do have Liam Plunkett to bowl hard lengths in the death, but he is not quite a Jofra Archer who is extraordinarily precise in nailing the Yorkers. Also Ish Sodhi because of his height and the trajectory he generates with it has an extra dimension attached to his leg-spin bowling in comparison to someone like Amit Mishra.

Batting wise, Rajasthan needs to revisit their game-plan. They want Ajinkya Rahane to drop anchor and bat through the innings, but Rahane still has to play the odds and target the weak links in the opposition attack especially while chasing targets which he didn’t do last game.

Delhi, on the other hand, is going hard at the top with both their openers and is getting handy contributions from the middle order too, barring Glenn Maxwell who has largely been off colour so far. The Aussie, however, carries the X-factor and is a match-winner on his own if and when comes off.

The prediction is for the Rajasthan Royals to beat the Delhi Daredevils in this match. 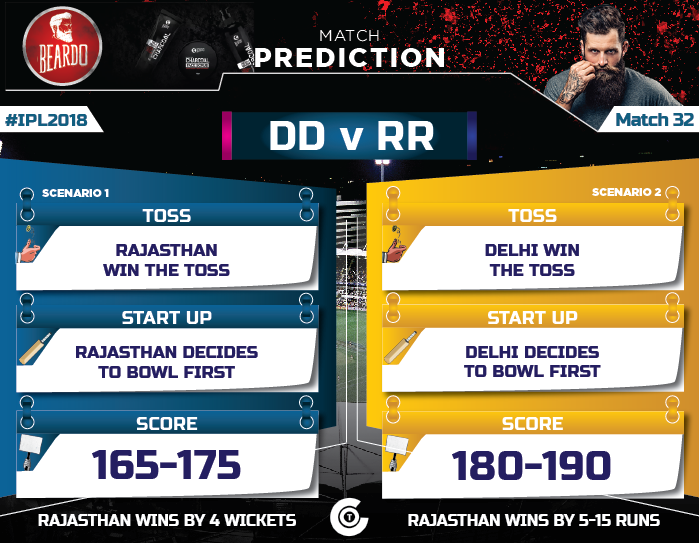