Rishabh Pant and Jos Buttler kept the spectators on the edge of their seats.

The rain-curtailed game turned out to be the last ball thriller as Rajasthan Royals (RR) failed to complete the heroic chase of 151 runs in 12 overs. It was raining sixes in the innings and Trent Boult’s brilliant final over saved the blushes for Delhi Daredevils (DD). The blistering knock from Jos Buttler went in vain as the Royals agonisingly fell short of the target by 4 runs. However, the credit should go to Boult who kept his nerves in the final over and helped his team from getting knocked out of the tournament.

Rishabh Pant is in amazing form this season and the young lad is finally justifying the talent. He came in to bat with a platform perfectly laid to launch the assault. Prithvi Shaw had played a whirlwind innings and it was time for yet another youngster of the Indian team to prove his worth. Pant began his knock with three back-to-back dot balls off Shreyas Gopal, the wicket-taker. But he got himself going off the final ball of the over by sending the length ball from the spinner into the stands.

It was only the start and then the carnage as it rained fours and sixes at Ferozshah Kotla. While the bowlers in the opposition were mostly Indian, he had to face the mighty Jofra Archer who is bowling like a dream currently troubling most of the batsmen. Pant didn’t care about his credentials though and clubbed a fullish length delivery with all his might for a maximum. The ball sailed it over wide long-on and the shot was absolutely magnificent which also left Archer overawed.

The fun continued until the end of the 15th over even as Pant smashed a half-century off just 23 balls. His knock ended while he was on 69 which he had scored only off 29 deliveries with 7 fours and 5 mighty maximums. His knock had helped Delhi reach close to 200 when their innings ended prematurely due to rain.

The rain had made the playing conditions worse for the visitors as they were given the target of 151 runs in 12 overs according to Duckworth Lewis Stern (DLS) method. Royals changed their opening combination strategically and sent Jos Buttler to open the innings. Well, it proved to be a masterstroke as the England wicketkeeper finally announced himself to the IPL this season.

He started spanking the ball away into the stands right from the word go and it was clear that he was given the license by the team to go bonkers. Avesh Khan was the man who suffered the heat very badly as he was carted away for 22 runs in one over. Of all the three sixes in the over, the fuller length ball which was scooped over short fine-leg was the best as he executed the shot with utter ease. In the end, he was stumped off Amit Mishra but not before scoring 67 off just 26 balls with 7 sixes and 4 fours. 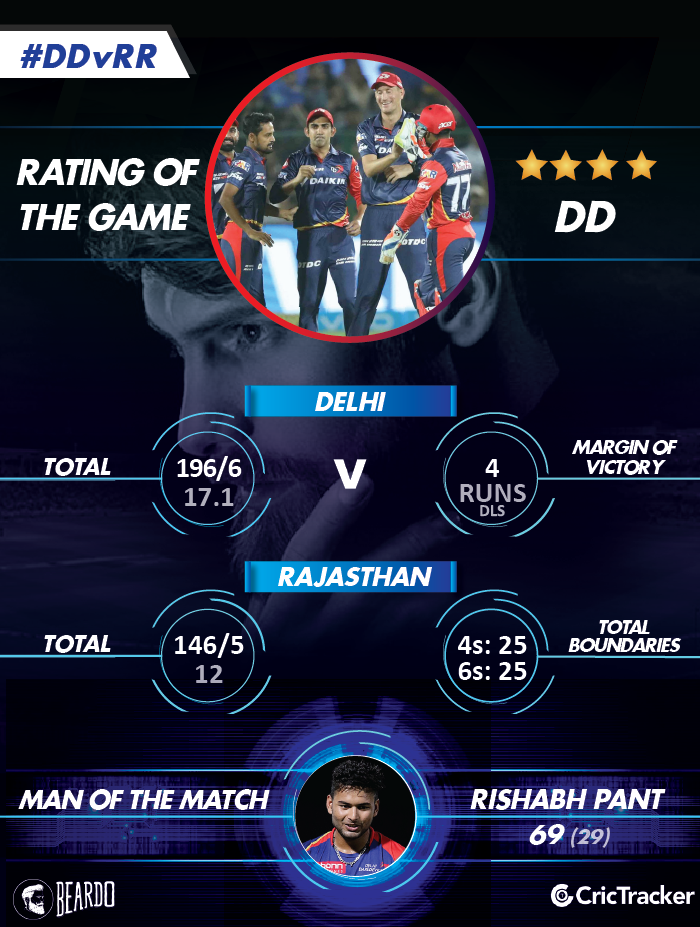