Sunil Narine dismissed Rohit Sharma on five occasions in the 87 balls he bowled in the IPL.

The value of Rohit Sharma’s runs in Mumbai Indians’ victories was once again established when the MI skipper took them over the line in a must-win match against Kings XI Punjab. Rohit has failed to get going in this tournament except for a couple of matches and those are the games his team has won. He scored a 94 while batting first against RCB and an unbeaten fifty against CSK while chasing to help his team add two points to their tally.

As the defending champions aim for a series of wins, the onus will be on Rohit Sharma once again to lead them not only with his captaincy but also with the bat. The 31-year-old has been batting down the order to ensure the youngsters get enough opportunity and time to play their natural game at the top. This idea which focuses on saving the experience of Rohit, JP Duminy and Ben Cutting for later in the innings has derived mixed results when they lost heaps of wickets in the powerplay.

Mumbai could continue their new formula against the Kolkata Knight Riders in their home match. KKR have been quite inconsistent in the tournament mostly due to their bowling. No KKR pacer except for Shivam Mavi has looked even marginally threatening in this tournament. With the Pandya brothers in their ranks, Mumbai could find things easier against the attack that comprises of three spinners. However, Sunil Narine could be the guy who makes a difference for his team given his recent form. 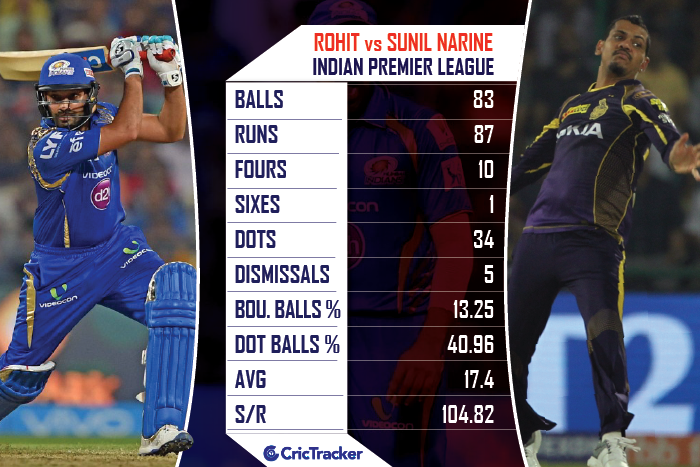 The mystery off-spinner also has a brilliant record against Rohit which will be addressed by both the teams in their pre-match plans. He has scored 83 runs off 87 balls against the West Indian and has lost his wicket five times in the IPL. As Rohit walks out at the key No.4 or No.5 position in MI batting line-up, KKR will want to attack the opposition skipper with Sunil Narine. The battle between these two IPL stalwarts could decide the fate of the game if the home team suffers an early slump with the bat.