Both teams are versatile and balanced and are blessed with some wonderful match winners and it will be more about who is better on the night.

The Mumbai Indians, as usual, are starting to play their best cricket just as they have been pushed into the do or die situation. Their performance in the last couple of games has been top notch and they have to keep bettering it going ahead as they don’t have room for any negative result in the rest of the tournament.

The Kolkata Knight Riders have had a roller coaster of a ride this IPL. While they are still holding their spot among the top 4, they will be really bothered about their indifferent form. As they are moving towards the business end of the tournament, the team will want to create some positive momentum which they haven’t created so far.

The Eden Gardens pitch for the previous game between CSK and KKR was a touch on the slower side, but that’s not how this pitch has been playing in the recent times. In the last 12-18 months, it has played pretty even and true and has offered nice carry to the fast bowlers and that’s what we should expect tomorrow rather than another slower one.

Mitchell Johnson looks a pale shadow of what he was a few years back. Dinesh Karthik has been showing a lot of faith in him probably because of his experience and a different dimension that he adds to the KKR attack being a left-armer, but he is just not delivering the goods and probably the time has come when the KKR skipper needs to drop him and give a long run to Tom Curran heading to the playoffs.

Prasidh Krishna made his debut last game and he was impressive with the pace he generated with a high arm action. He was a bit unlucky in the death as a few edges flew to the fence, but his overall outing with the ball was good enough for him to be given another go.

Mumbai are failing to utilize JP Duminy in the best possible way and that’s because they have too many top order players in the XI. Duminy is best suited in top 4 and he is not getting to bat in there.

Rather than blocking the 4th overseas slot by having Duminy in the XI, Mumbai can pick Adam Milne who will be the 4th specialist bowling option for the visitors and they won’t necessarily have to get 8 overs out of the part-timers like Krunal, Hardik and Cutting.

Both teams are versatile and balanced and are blessed with some wonderful match winners and it will be more about who is better on the night. Reading the conditions and making the best use of the resources will be the key for both the captains.

The batting order must be right. For KKR, Sunil Narine must open as he is a waste down the order. Shubman Gill, who is a top order bat and opened last game, can provide decent returns at no. 6 as well and that’s where he should be slotted back to make sure Narine opens with Chris Lynn.

Mumbai must have Ben Cutting batting higher up than no. 8. He is a clean and muscular striker of the cricket ball in the death and his position should be determined according to the no. of overs left in the innings. He should be in around 17th over mark if a wicket falls around that period.

Ishan Kishan should be put back at no. 3 as that’s his ideal position given he has got fantastic skills against the spinners, but he isn’t very comfortable smashing the fast bowlers towards the end.

The prediction is for the Mumbai Indians to beat the Kolkata Knight Riders in this match. 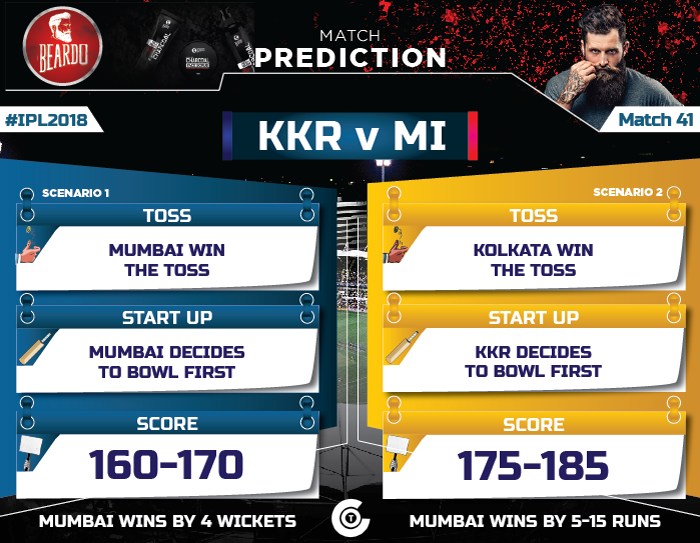