The Knight Riders were decimated by the Mumbai Indians for the 10th time in 12 games at the Eden Gardens.

Eden Gardens was the venue for today’s contest between the Kolkata Knight Riders (KKR) and the Mumbai Indians (MI). It was supposed to be the home-ground of the KKR for the game. However, a record of 2-11 against the home-team meant that MI have found the stadium as a comfort zone especially against the Men in Purple and Gold.

Moreover, Eden has been a happy hunting ground for Rohit Sharma especially for his past records at the iconic venue. Dinesh Karthik’s decision to chase didn’t come as a surprise as four out of the Knights’ five victories came while chasing a target. Prior to the match, Shubman Gill got himself injured which meant that KKR’s batting was depleted to some extent.

The visiting team started well, but at no point in time did they look like taking the game away from the Knights. In the first nine overs, Mumbai could only muster 62 runs at a run-rate of below seven as the home side restricted the likes of Suryakumar Yadav, Evin Lewis and Rohit Sharma. Most importantly, they lost their openers rather cheaply for a combined score of 54 runs.

(Fir batting karne aata hain Ishan Kishan) Then Ishan Kishan comes to bat. Kuldeep Yadav’s wrong’un ripped through his bat and pad, which excited the Knight Riders. However, that turned out to be KKR’s last moment to rejoice in the match. Kishan didn’t play the next ball from the crease, rather he used his feet, smothered the turn, met the ball on the full and gracefully deposited the leather over long-on

The Kishan-thunderstorm wasn’t a prolonged one, but it was venomous enough to leave Kolkata in shambles, physically and psychologically, enough to further not to let them a foothold in the game. When he took charge, the run-rate was 6.89. After his dismissal for 62 runs at a strike-rate of 295.23 in the 15th over, the run-rate escalated to 9.81, which was enough to implant a mental scar on the KKR.

Bad to Worse for KKR

The last time the Knights were faced with a target over 200 runs against the Delhi Daredevils (DD), they were beaten black and blue. Karthik’s men had the opportunity to redeem themselves and Sunil Narine signalled his intentions from the first ball as he smashed Mitchell McClenaghan over mid-off, eluding the outstretched hands of Rohit. Narine didn’t evade Krunal Pandya’s hands as the Kiwi nipped him out.

Chris Lynn’s dismissal courtesy of a run-out invariably sealed Knights’ fate in the match as he was middling the ball and finding the boundaries, frequently enough to keep KKR in the hunt. It was a procession of wickets thereafter as the Knight Riders slipped further with every passing ball. Such was their day that even half-chances went against them as Dineh Karthik’s run-out by Hardik would suggest.

Each of Mumbai’s players possessed the power of the Midas Touch as every step taken by them succeeded. Moreover, they move to the fourth position of the league table above the Knights. Meanwhile, this was KKR’s 18th overall defeat against Mumbai- the most one-sided rivalry in the history of the cash-rich tournament. 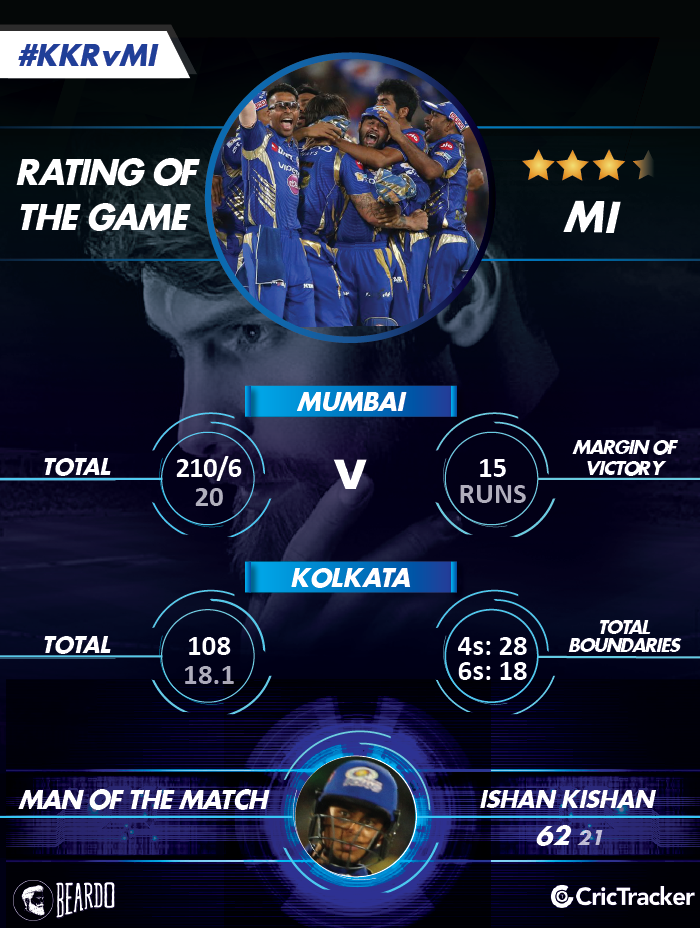