Mumbai Indians have continued their dominance over the Kolkata Knight Riders as they defeated them for the 7th consecutive time in the IPL last time these two teams met. As both the teams left to play four matches each, their face off at the Eden Gardens today will be crucial with respect to their playoffs qualification. Mumbai have the best of records while playing in Kolkata and their captain Rohit Sharma’s stunts don’t demand a mention. A loss here for KKR will square them up with MI and the points table will reflect – five wins in 11 matches.

Both the teams have loaded batting line-ups but are where they are because of the inconsistency of their bowling. KKR have a weak pace attack while except Jasprit Bumrah, no MI bowler has bowled his quota of four overs in most matches. Hardik Pandya’s recent form with the ball is a good sign for the Mumbai Indians and the team needs to work on utilizing the specialist bowlers and the 6th option. Mumbai have opted for a plan to use pace for neutralizing the threat from the opposition in the previous two matches.

MI used four overs from Bumrah and Mitchell McClenaghan early against Kings XI Punjab to dismiss KL Rahul and Chris Gayle. In the previous match, they followed the same tactic to dismiss Chris Lynn and Sunil Narine. However, Narine didn’t open the innings while Lynn survived against some really good deliveries before getting on a loosner. The visiting side will be looking to continue their plan in Kolkata against the Australian batsman. 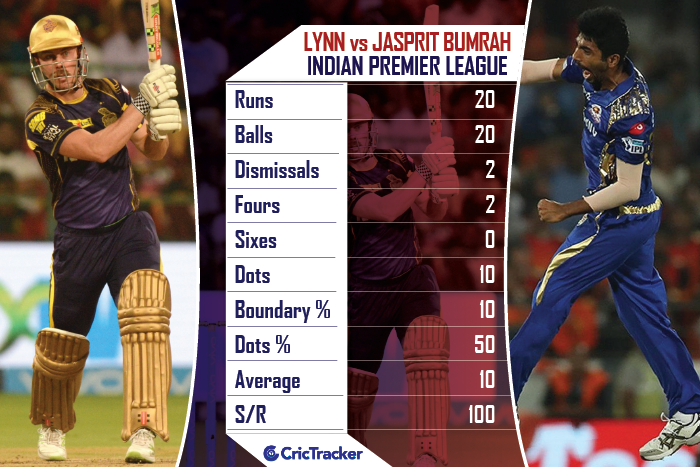 Though Lynn has failed to meet the expectations so far this season, he can be dangerous at the Eden Gardens that favours batsmen. The right-hander has failed to get going against Bumrah in the IPL as he has got out twice in the 20 balls. Lynn managed to score only 20 runs with two boundaries which came in the previous match. Bumrah tried to bowl into Lynn during the Wankhede game and even produced an edge that went for a boundary bisecting the slip cordon.