For KKR, it has come down to a do-or-die scenario. Punjab have got a bit more leeway as they can still afford a couple of losses, but having lost 2 out of their last 3.

Both Kolkata Knight Riders and Kings XI Punjab seem to be losing a bit of momentum as the tournament is approaching its business end. They were in comfortable positions in the table about a week ago, but the momentum is shifting ever so slightly and they now have a fight on their hands for securing their playoff spots.

For KKR, it has come down to a do-or-die scenario. After suffering their 6th loss against Mumbai the other night at the Eden Garden, they now have to win all 3 of their remaining games. Punjab have got a bit more leeway as they can still afford a couple of losses, but having lost 2 out of their last 3, they will be keen on a positive outcome as well.

The Holkar Stadium wicket has not played as per the expectations so far. The general thought was that it would be a batting beauty just like it was the previous season, but it has instead turned out to be sticky and the boundaries, therefore, have not been easy to come by.

One of the mistakes that the teams have made at this venue is that they have not assessed the conditions right and have gone too hard batting first when the par score has only been around 170. That’s something they will have to keep in mind tomorrow. If the ball is gripping into the surface, there is no point aiming for 200 and getting bowled out for 145-150.

Both Manoj Tiwary and Yuvraj Singh are out of form, but Punjab might just prefer to bring Yuvraj back for the skill-set he brings to the table. He is an immensely versatile and dynamic T20 batsman, unlike Tiwary who doesn’t have as much of a hitting range as the veteran left-hander.

The form is obviously an issue with Yuvraj, but the amount of experience he has, he can still find a way to come good for Punjab if they back him and needless to say Yuvraj in his full flow can be a match winner in the shortest format of the game.

Prasidh Krishna was out of rhythm last game and dished out too many boundary balls for the batsmen to thrive on. Kolkata will surely weigh him up with Shivam Mavi for the second fast bowler’s spot and Mavi should probably get the nod given the fact that he can do the job in the death as well apart from bowling upfront unlike Krishna who seems to be at ease bowling early on rather than the latter stages.

Shubman Gill for Rinku will be an automatic selection if the former is fit. The 19-year old was out injured last game, but the word was that it’s not a major injury and hence he should be available tomorrow.

KKR’s batting is more balanced and is not overly dependent on their opening pair unlike Punjab, but they would be really concerned about their pace bowling department as it has undone the work of the spinners quite a few times this season. Tom Curran and Mitchell Johnson have not justified themselves as the overseas picks at all and Andre Russell has also not run in at full tilt either. The pace battery is KKR’s weak link which Punjab will look to target.

KXIP’s problem has been their middle order and KKR will try and expose it as soon as possible. If Chris Gayle and KL Rahul are not allowed to come into their own at the top, Punjab will feel the heat because they just don’t have enough firepower going down. They lack the muscle power and finishing depth which is a big chink in their armoury.

The prediction is for the Kolkata Knight Riders to beat the Kings XI Punjab in this match. 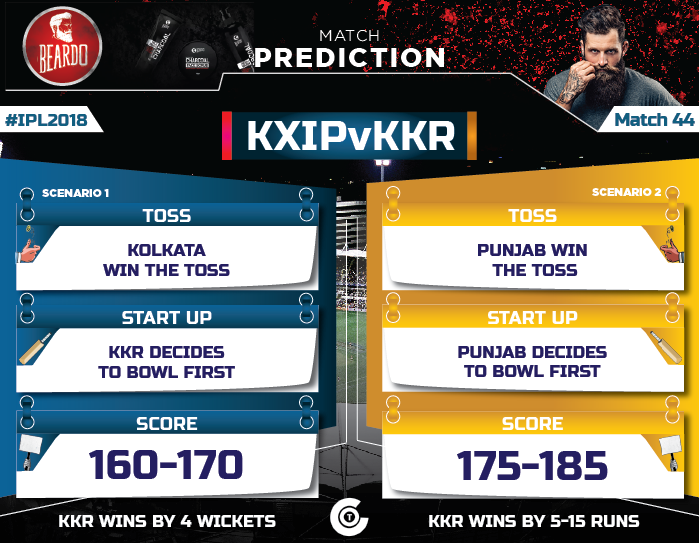