Virat Kohli and AB de Villiers added 118 runs for the 3rd wicket to ease the chase.

Royal Challengers Bangalore stay alive in the playoff race with a convincing win against the Delhi Daredevils powered by their superstars Virat Kohli and AB de Villiers. The home team posted 181/4 after losing the toss thanks to some special efforts from Rishabh Pant and the debutant Abhishek Sharma. RCB lost their openers early on before Kohli and ABD guided them towards a win with a huge partnership. Both the batsmen scored 70s as their team reached the target with one over to spare.

AB de Villiers covered up for the low scores in the previous two matches with an unbeaten inning to take RCB over the line. The South African scored 72 off 37 balls with four fours and six sixes including the one with which he finished off the match. The RCB player was the Most Valuable Player of the match earning a value of 85 lakhs for his performance as per the CricTracker’s Player Value algorithm. Junior Dala was the Liable Player on his IPL debut conceding 34 runs in the three overs he bowled. 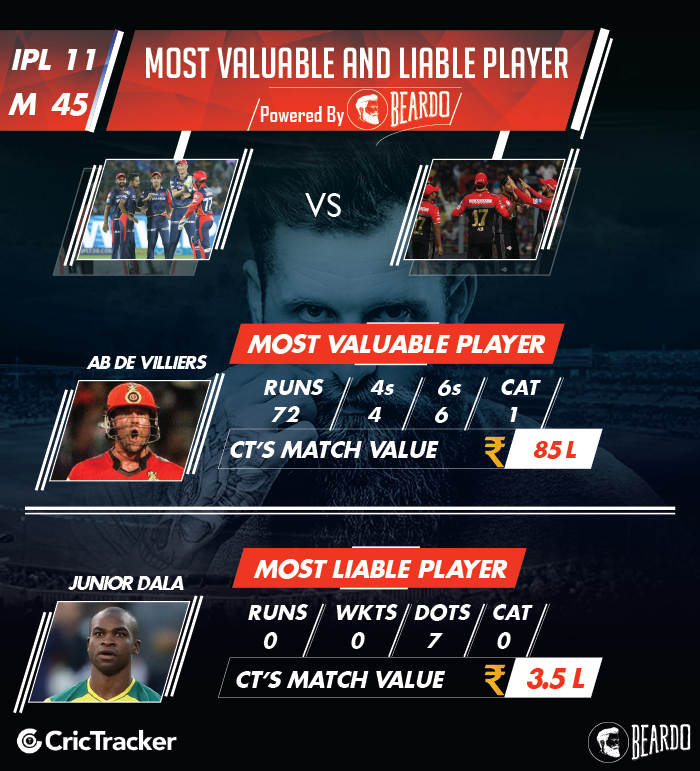 The RCB skipper Virat Kohli was no less than De Villiers as his match performance was valued at 81.5 lakhs. Kohli scored his joint fastest IPL fifty during the 40-ball 70 that included seven fours and three sixes. Rishabh Pant continued his rich form with his fifth fifty-plus score of the season which earned him a value of 72.5 lakhs the highest among DD players. Colin de Grandhomme earned the lowest value among RCB players as he got a chance to bat when RCB needed 14 runs to win. 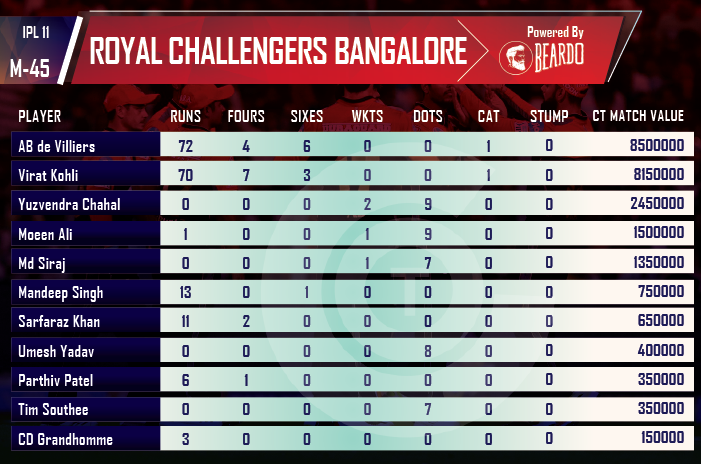 Abhishek Sharma was a surprise package for the Delhi Daredevils as he produced a cameo towards the end of their innings to push DD’s total to 181/4. The 17-year-old scored 46 off 19 balls with three fours and four sixes which included consecutive boundaries off Tim Southee. The left-hander nearly became the youngest player to score fifty in the IPL surpassing the previous records by a fair margin. Abhishek earned a value of 51.5 lakhs which is little less than his auction price of 55 lakhs. 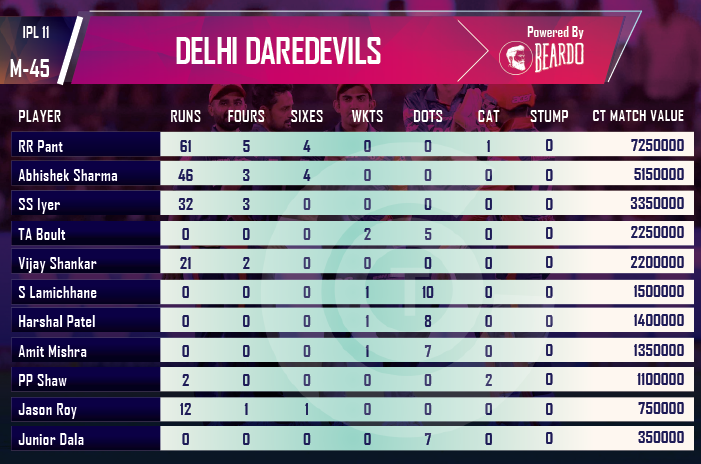