Ambati Rayudu and Shane Watson overpowered the best bowling attack of the tournament.

Chennai Super Kings (CSK) have almost sealed their place in the playoffs by thumping Sunrisers Hyderabad (SRH) by 8 wickets. It was the opening duo of the hosts which did the job for them as they added 134 runs to make light work of the chase. Ambati Rayudu was excellent as he notched up his maiden T20 century and remained unbeaten until the end. However, the crowd also witnessed a special knock from Shikhar Dhawan who rose to the occasion and helped his side post a daunting total on the board.

Shikhar Dhawan was going through a rough patch post the injury phase which had forced him to miss a game. he was completely struggling and his team was also failing to notch up big totals. But something triggered him in the last game against  Delhi Daredevils and has found his mojo quite spectacularly. It was the bowling attack of CSK this time which had to bear the brunt of his assault. He just continued from where he left his knock at the Feroz Shah Kotla a couple of days ago.

Alex Hales was dismissed early and the Men in Yellow were bowling extremely well with the bowl swinging both the ways. He played the new-ball specialist Deepak Chahar patiently and surprisingly left a few balls outside his off-stump off Dwayne Bravo. But the action post the 10th over saw a completely different Shikhar who was just looking to belt the leather. None of the shots was a slog and he clearly announced himself in the middle overs between 11 and 15.

Ravindra Jadeja was the man in the firing line in the 11th over who was smacked for a four and a six. The first whack was off a good length delivery off the back foot as the ball was perfectly bisected between extra cover and the sweeper cover. However, the maximum was even better from the southpaw as he got under the full delivery outside off and smoked it over long-on comfortably. The onslaught continued over him even as the other bowlers also faced the heat as he crossed the 50-run mark.

Just when the fans were entertaining the thoughts of him getting to the three figures for the first time in his T20 career, he was sent back by Dwayne Bravo who foxed by the change of pace. But Dhawan looked absolutely unstoppable during the assault and put his team in a strong position.

Heroic opening stand between Rayudu and Watson (134 off 81)

The bowling line-up of SRH has defended the low scores of 118, 131, 152 and 146 this season and they had 180 to defend this time. CSK needed a special effort from the batsmen to seal their place in the playoffs and they got it from their terrific openers Shane Watson and Ambati Rayudu. The former began the onslaught first in the first few overs and then his partner joined him only to overcome him easily.

Some of the best bowlers were taken apart by the duo. Bhuvneshwar Kumar is going through a rough patch and he was deposited into the stands by Watto off the second delivery of his spell. It was a disdainful shot by the batsman and it would’ve shattered the confidence of any bowler. Then Sandeep Sharma was in the firing line as he was taken apart in the next over. While one of the maximums was over short fine leg as the bowler messed up the knuckle ball, the other was dismissed with a statement of ‘Don’t bowl short to me’ written all over it.

Now comes Rayudu’s turn to join the fun and steal all the limelight hogged by Watson until then. It was the fourth over when decided to when he reached out for a fuller length and lifted effortlessly over the extra cover. However, it was Siddarth Kaul who faced the heat of Rayudu’s impeccable form with the bat in the seventh over of the innings. Though there was a six hit in that over, this time a four was praised by everyone which was smashed by presenting a straight bat and the ball raced past mid-off.

The fun continued as the duo added 134 runs in 79 balls and ended the contest in the game. Though Watson was run-out it was Rayudu who stayed until the end and scored a brilliant century and won the game for his side by 8 wickets comfortably. 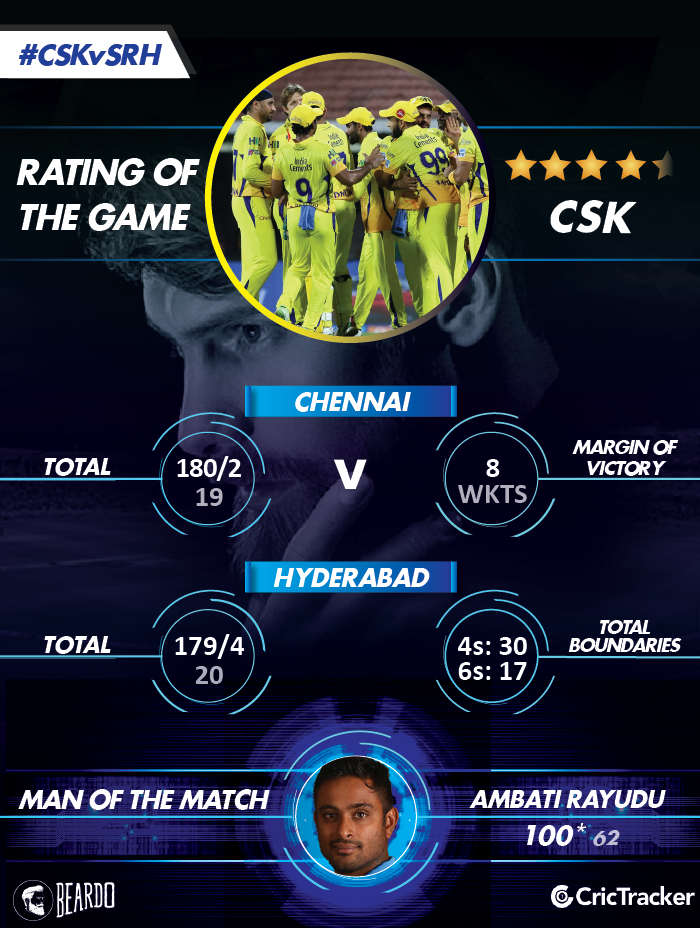