The Kings XI have stuttered a bit in their last few matches and will want to get back on to winning ways.

The Royal Challengers Bangalore have lost 7 games, but they are still hanging by a thin thread in terms of remaining in contention for the playoffs and they did their chances no harm yesterday by beating Delhi Daredevils comprehensively.

RCB need to add 6 possible points to their tally in the 3 games they have to play from here on and hope that some of the others teams lose the plot so that they can sneak into top 4.

The Kings XI Punjab, unlike RCB, have their fate in their own hands. They have 6 wins to their name so far and if they win 2 out of their remaining 3 games, they should be able to secure their playoff spot comfortably.

The Holkar Stadium pitch for the first couple of games was sticky, but the curators produced an absolute belter for the last one between KKR and Punjab which resulted in KKR posting the highest team total of this season. If there is a flat road on the show again, we might be in for another run fest with some heavyweight batters there in both teams.

Kings XI Punjab, after trying Marcus Stoinis, has moved back to Aaron Finch for the middle order finisher’s role and Finch, to be fair to him, hit the ball nice and clean yesterday against KKR. That he couldn’t get the job done was a different thing, but he definitely appeared to be in good touch and Punjab will stick with him going ahead.

Axar Patel got smashed last game, but given the nature of the pitch, he couldn’t have done much. It was just too difficult for his style of bowling as he bowls quick and flat and is likely to be effective only when the ball grips into the surface.

Because of the fact that Axar is not in the team as a specialist bowler and is playing more as a batting all-rounder, he should stay in the XI. The skipper Ravichandran Ashwin will, however, be reluctant to give him his full quota of overs if it’s a true surface.

Moeen Ali hasn’t looked impressive with either bat or ball in the two games he has got and he is in line to be dropped tomorrow. Washington Sundar being the off-spinning all-rounder should be the like-for-like replacement and for once RCB might use him at the top of the order.

The 18-year opened in TNPL last year and set the stage ablaze with his stroke-play upfront. He has got a good range of shots and he can absolutely tee off for RCB in the first 6 overs when the field is up.

Mandeep Singh has struggled the last couple of games, but RCB will persist with him as he played quite a few crucial knocks for them in the first half of the tournament. They don’t have any domestic reliable finisher at their disposal anyway, which makes the decision easier.

Three out of 4 victories of RCB this season has been scripted by AB de Villiers and Virat Kohli which is a big concern for the team management. However consistent de Villiers and Kohli are, they can’t be expected to come good in all the games. The other batsmen need to provide them ample support which they have refused to do so far. Punjab also have more or less the similar issue with their batting. If RCB relies too much on de Villiers-Kohli duo, the visitors bank heavily upon their two openers Chris Gayle and KL Rahul.

As far as the two bowling units are concerned, there is not much to choose from. Maybe the mystery element of Mujeeb gives Punjab an edge, but the overall difference in quality is not huge and it will be about who executes the skills better on the night.

The prediction is for the Kings XI Punjab to beat the Royal Challengers Bangalore in this match. 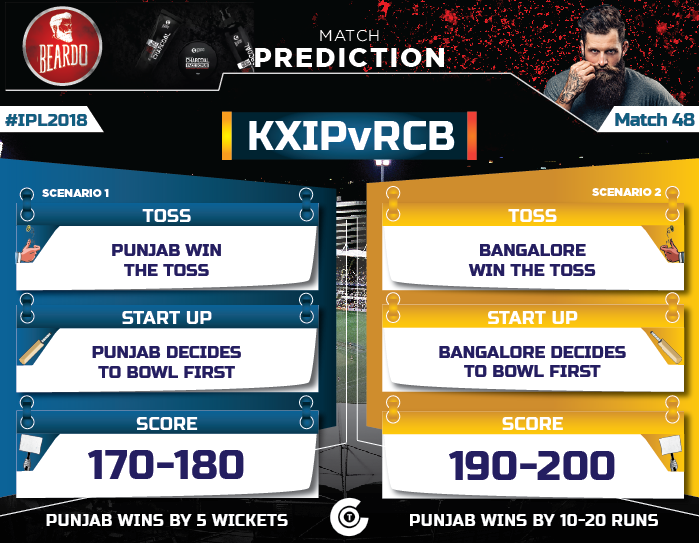