An all-round performance saw the Knights humble RCB in the opening game.

Kolkata Knight Riders (KKR) registered their maiden victory in the 2018 Indian Premier League (IPL) against the Royal Challengers Bangalore. The franchise also notched their sixth successive victory in the opening game of the tournament since 2013. They were in all sorts of trouble when AB de Villiers and Virat Kohli were wielding their magic at the crease.

However, the tables turned for the Knights gradually as they got the visitors by the scruff of their necks. They would now be going to Chennai where they will face MS Dhoni’s Chennai Super Kings who have also won their opening game against the Mumbai Indians. Going into the game at the MA Chidambaram Stadium, here’s an insight into KKRs predicted eleven for the game.

The opening stand for the Knights wasn’t changed from the one in the previous season. Though Chris Lynn, the Australian batsman, looked jittery, the Knights are highly unlikely to replace him at the top of the order. Meanwhile, CSK will be wary of the brutal hitting abilities of the Queenslander. KKR also persisted with Sunil Narine as the opener in the opening match.

The gamble paid dividends as he turned out to be one of the primary reasons for the franchises’ victory. He hardly looked ruffled by against the likes of Yuzvendra Chahal and others. However, CSK has a formidable bowling lineup and Narine would need to be a little more circumspect in order for him to again take KKR of to a blistering start.

The middle-order performed decently in their opening game. Robin Uthappa looked a tad out of touch but has the prowess to storm back to form. Rinku Singh made his debut for the Knights and seemed a power-packed player. Nitish Rana and Dinesh Karthik showed maturity against RCB and carried forward the good work done by Narine in the beginning.

Rana played some aggressive strokes but didn’t get carried away. The Delhi batsman also picked up singles to build a healthy partnership with Dinesh Karthik, the KKR skipper. On the other hand, Karthik put his head down and played until the very end. Also, he was clever with his leadership skills and made some impressive bowling changes.

Andre Russell was among the two players of KKR who were retained initially. Though he didn’t have much to do in the opening game, he was impressive enough to retain his position for the next game against CSK. He was introduced very late into the attack and he bowled exceedingly well. However, it still remains to be a surprise why didn’t complete his quota.

When he took charge with the willow, the Knights still required a fair amount of runs. He struggled to make proper connections early in his knock but spanked a couple of boundaries and a six, which took the Knights closer to the finishing line. Against CSK, Russell might be required to deliver with a more significant performance.

The bowlers leaked runs early, however, did well to restrict RCBs explosive batting lineup. Meanwhile, Vinay Kumar, being the senior-most bowler of the team would be looking to show improvement against the CSK. Piyush Chawla bowled cleverly and didn’t let his captain down after being retained through the Right to Match (RTM) card.

Mitchell Johnson was taken for runs early by Brendon McCullum, but he made a comeback in his spells thereafter. Kuldeep Yadav would also like to shrug the disappointment of his show in the opening game. Also, Andre Russell and Sunil Narine, the Windies bowlers, have to play their part to get a lid over Chennai.

Here’s the KKR Predicted XI for the game against CSK 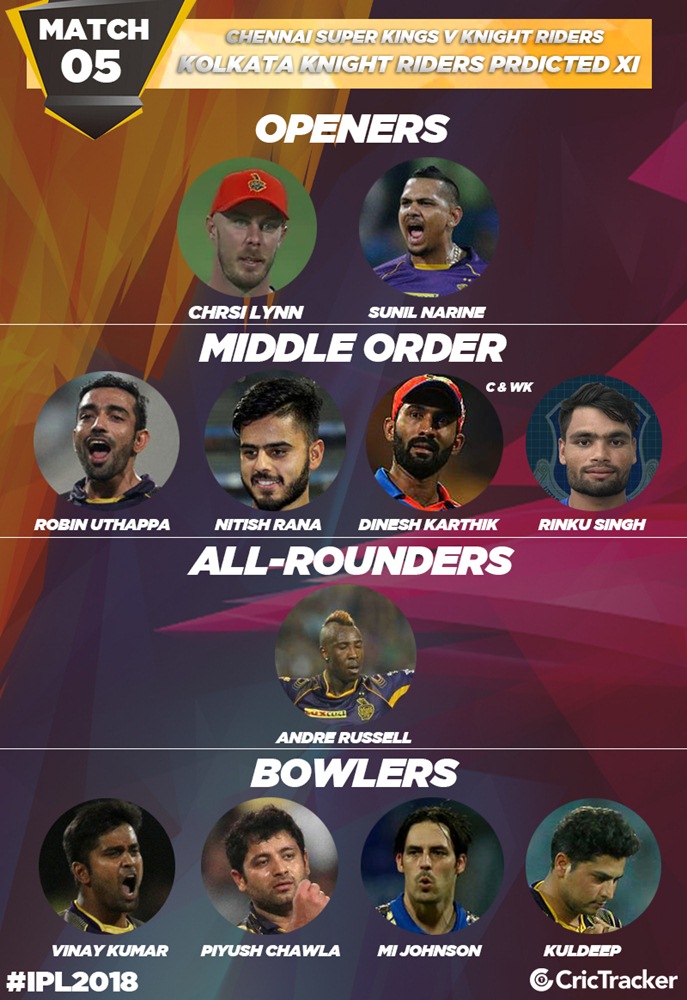