Royal Challengers Bangalore have done well in the last few matches and thus kept themselves alive in the race for the playoffs and a big win over Kings XI Punjab improved their chances further. They will now face the strong Sunrisers in their last home match with a hope to secure their 3rd consecutive win which can put them in an even better position moving forward. The Hyderabad franchises have a history of dealing a deadly blow to RCB’s chances in the IPL and something similar can happen this time around as well.

RCB have struggled to perform as a unit this season where either their bowling or batting clicked in a given match but barely together. They will need to stop SRH’s top order that has been consistent in the last few matches and proved to be a formed a lethal combination with their bowling unit to make life miserable for the opponents. In the away fixture, RCB failed to chase a mere 140 runs despite getting off to a good start. Sunrisers Hyderabad have conceded 180+ in the two matches after that game, RCB can fancy their chances if the table toppers decide to rest a couple of their senior players.

The Challengers have been quite good at executing their plans despite having a limited bowling attack. They emerged on top against Kings XI only by attacking KL Rahul and Chris Gayle with hard lengths. They will need to plan and execute their course of action with better effect to stop Shikhar Dhawan and Kane Williamson who have been SRH’s top batsmen this season. Williamson has anchored the innings in most games but whenever Dhawan has got going, he matched him shot for shot and run for run.

Dhawan entered the IPL on the back a glorious limited-overs form and began the tournament unbeaten 78 and 45 in the first two matches. After suffering an elbow injury and sitting out of the team due to that the Indian opener’s form went for a toss. However, he bounced back with an unbeaten 92 at his home ground and made it better with 79 against CSK in the last two matches. Dhawan has shown the willingness to take chances in the powerplay overs and has scored his runs with a SR of 142.47 in this IPL which is the first time he scored with a strike rate of over 130 in an IPL. 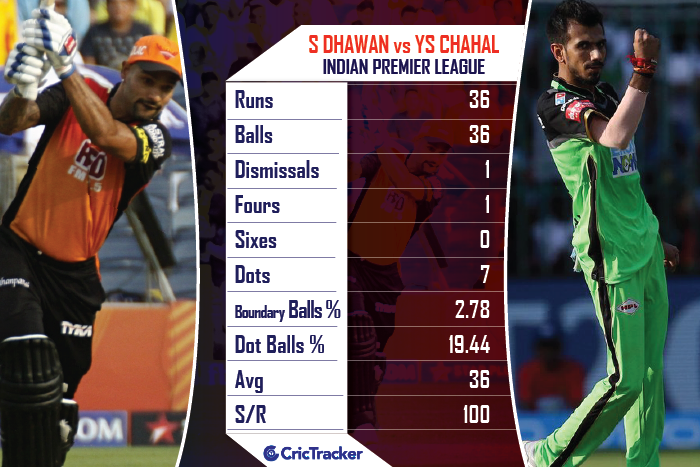 RCB have periodically used Yuzvendra Chahal’s services in the powerplay and the leg-spinner could be the right man to stop Dhawan. The wrist spinner has given away only 36 runs in the 36 balls he bowled at Dhawan in the IPL thus far and has dismissed him once. Dhawan has managed to score only one boundary in the 36 balls he faced from Chahal in the league so far.